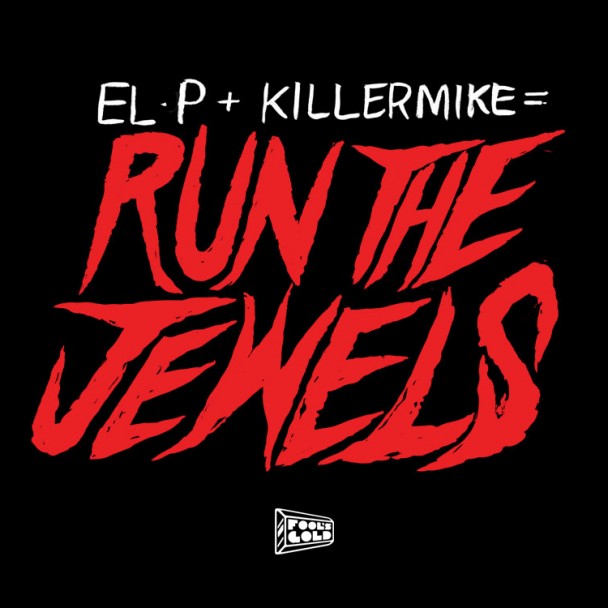 Hungry artists are fan’s best friends. El-P & Killer Mike may not be household names but they make waves with every release. El’sCancer 4 Cure was a great effort from the alt hip hop artist where as Killer Mike’s last album, R.A.P. Music, was out shined only by Kendrick Lamar’s Good Kid, M.A.A.D. City. Mike and El-P met during R.A.P. Music’s production and from there the relationship evolved into this newest release Run The Jewels, which features both of our aforementioned artists absolutely slaying incredible production track after track.

Now, back to being hungry. Run The Jewels is aggressive and expanding throughout. There’s no stopping either lyricist. It’s a constant barrage of internal rhyming, word-play, and story telling. One of the best examples of the album as a whole is “Sea Legs”. You’re brought into the track with some budding synth work while waves crash against the beach. It slowly evolves from a snapping finger to a resounding snare. The layering would be chaos for another producer but El-P finds his best work within that erratic noise and excels at pushing what happens sonically. Lyrically, the song focuses on dealing with the perils of getting lost whether that’s internal or external. “Is this real or another dimension? / Am I trippin’ here in the kitchen?” Mike asks while El-P looks inward thinking, “Maybe should’ve never started this path / Every time I get a chance to advance it’s backwards.” And to demonstrate even further the lost of their sense of self, they both work into the other’s verse. It’s a genius track and a great representation of how the album flows.

Both of them vary their flows, deliveries, and topics with such grace this whole tape just flies by. I realized I had listened to it all the way through a lot faster than I had anticipated. It’s quick and viciously focused but there’s also a lot of atmosphere in there and space to get lost in especially on the closer “A Chistmas F*cking Miracle”. After a majority of the ten tracks seeing El-P and Killer Mike exchanging intensity, this epilogue takes you to a more patient place between the minute long ending of a wailing guitar and echoing bass. The song is a powerful catharsis for Run The Jewels, going out with reflective, nostalgic verses.

I don’t like naming something Album of the Year until we’ve heard it all. Honestly though, I’m not sure much else can touch what was accomplished within these ten songs. The duo has such a dynamic presence that’s coupled with a spacious and driving style of production El-P is known for. Jay-Z has his Magna Carta to release along with Pusha T’s My Name is Name coming out the 16th. If they can have albums as dense as Run The Jewels with the same amount of ease to listen to again and again, then maybe they can compete. Right now though, El-P + Killer Mike have released the strongest rap album of 2013 by far. And to top it all, IT’S FREE!!

This album is available for a free download HERE.