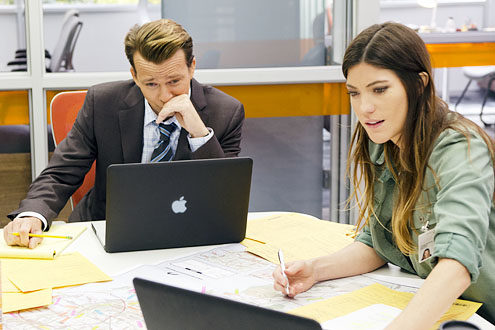 A huge revelation happened at the end of this week’s episode that is almost good enough to cover up all of the unsatisfying bits and pieces that were tied up in a neat little bow. In last week’s episode, Deb tried to kill herself along with Dexter in a car-flying-off-a-ramp-into-a-pond stunt. In the first few minutes of “This Little Piggy,” the siblings are meeting Dr. Vogel and talking about their feelings as if she merely forgot to pick him up from soccer practice.

Another revelation (that could be turned around because the facts are up in the air) is the possibility of Yates being The Brain Surgeon, which isn’t satisfying when you compare him to The Trinity Killer or even the Doomsday Killer. The one episode with the cannibal basically trumps Yates, who is more of a mama’s boy like the killers from Red Dragon and Psycho. Hopefully—for Dexter fans—the killer is still out there sharping his scalpels.

In the parent-scolding-child-like therapy scene, Dexter even had the audacity to tell Deb that she almost made his son an orphan, which is something he risks with nearly every day of his life. The theme, however, was presented well in the opening and tied together in the end. All of the main characters are essentially searching for family, including Dexter, Deb, Dr. Vogel and even Yates: the foot-fetish killer. In addition to family togetherness, this episode also revealed a rich family that possibly hosts another killer for the final season.

A maid that was sleeping with a rich husband died and it’s quite possible that the killer is the son of the wealthy family, based on eyewitness accounts and his general douchebaggery and fascination with the murder. The problem with this in terms of the episode is that Matthews is limiting Quinn’s investigation because the family donates money to the police department. Normally, this kind of thing wouldn’t bother me in terms of plot, but it seems a bit thin for the final season. I suppose it’s meant to show Quinn’s true skills as a detective and Matthews potential unlawfulness as a leader.

Besides plot, the action portions of the film were semi-exciting as Yates ineloquently grabbed Dr. Vogel by tossing something through her window in a B-and-E type scenario (again, he’s probably not The Brain Surgeon). This meant that Dexter and Deb had to work together to find her. It also casted her as even more of a mother figure for the Morgans. After only a small amount of arguing, the two teamed up with the phone assistance of Elway (still unsure about Elway as well) to find Yates in an abandoned house with his captive. It’s a bit much that Deb made so much progress in this episode but it’s linked to the fact that Dr. Vogel kept insisting that she needed to hit bottom, which she did with the car crash in the previous episode.

Dr. Vogel also had an empowering scene when she was put to the limit. Yates was about to cut off one of her toes as part of his ritual when she stood up for herself and used her psychological empowerment over him to knock him down both verbally and physically. In the final moments of the show, audiences were invited to see one expected plot point and one unexpected plot point. After Dexter killed Yates, Deb made a remark about a family that slays together. She also seems unrivaled by the transition of seeing her brother as a killer and watches him kill with little guilt. In the final moments of the episode, Dexter, Deb and Dr. Vogel go out on Dexter’s boat to dump the body—just another Morgan family outing.