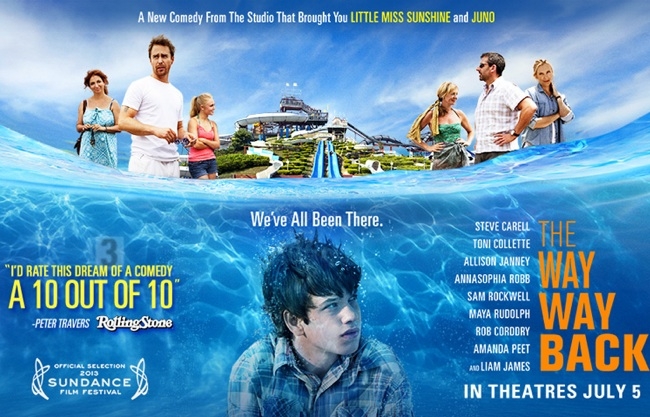 A Blast from the Past Built to Last

Remember those 80’s and 90’s summer vacation movies with everlasting humor? The ones with parents chilling out by the beach, acting like children, and children entering adulthood; the ones that offer escape from the monotony of everyday life shaped up by demanding careers and addictive electronics; the ones that last forever in our memories and we ever so often dust off from the bookshelves and re-watch? Well, give your old VCR a rest this summer because the Oscar-winning duo of comedian/screenwriters Nat Faxon and Jim Rash hit the nostalgic spot just right with their directorial debut The Way, Way Back.

Reviving the enchanted atmosphere of the past into the reality of the present, the sentimental flick follows 14-year-old Duncan (Liam James) who is heading on a summer vacation with his malleable mom Pam (Toni Collette), her arrogant, self-centered, manipulative boyfriend Trent (Steve Carell) and his equally dismissive teenage daughter Steph (Zoe Levin). Constantly facing the rejection of the father-daughter team, Duncan finds an outlet in the town’s water park where he is taken under the wing of outgoing manager Owen (Sam Rockwell) who, along with his perky employees (played by Maya Rudolph alongside Faxon and Rash), guides the young introvert on his journey to self-discovery and adulthood.

Foreshadowed by Trent’s vintage Buick heaped with suitcases strapped to the roof, the film sustains its sentimental appeal throughout. With its dated water slides, rental houses, small shops and food joints where vintage pinball machines and milkshake makers are still in use, the film remarkably revives the enchanting vitality of a buzzing coastal town from Way, Way Back, providing the perfect ground for “spring break for adults,” where the seafood feast and alcoholic refreshments never end.

If, in 2011, the co-writers of Alexander Payne’s Oscar-winning The Descendants had their outrageous humor restricted to the melancholic demands of bittersweet family drama, here the two comedians show what they are made of! Inspired by Faxon and Rash’s “happy memories,” the superbly written dialogue boosted with hilarious old-school humor is built to last. As soon as the vacationers arrive at the summer house neighborhood, the humor bursts out of the mouth of (who else if not) Allison Janney who plays Betty the obnoxious slutty neighbor, welcoming the arrivals with: “Thank God! If I drink alone one more night, I swear I’ll kill myself.” And from then on the jokes keep rolling without a pause.

The emerging filmmakers know how to find the right balance in their satire and leave room for the story and character to develop and grow. Breaking its summer-flick stereotype, The Way, Way Back not only stands out with its memorable characters who (to the last one) undergo self-discovery, but also for its sincere exploration of relationships. The friendship developing between Duncan and Owen, enriched by the radiating chemistry between actors Rockwell and James, is captivating. In the end, the heartwarming dramedy leaves you with a lasting choke in the throat.

Of course, memorable characters go hand-in-hand with memorable performances. The film’s acting work and A-list cast–equally committed to the humor and the drama in the story– are remarkable, as is the directors’ brave rejection of all type-casting codes. Here Steve Carell strays away from the silly protagonist and Sam Rockwell from the sadistic bad guy; Toni Collette from her usual strong, self-confident roles and Maya Rudolph is a foil to the immature and outrageous.

And certainly we cannot go without acknowledging Faxon and Rash’s admiration of Mom’s special home cooking. Pam’s masterfully prepared and presented summer dishes (which the camera teases with every chance it gets) is another pleasing feature in the movie, contributing to its captivating sentiment and leaving the viewer begging for more…which might just be the ONLY shortcoming of The Way, Way Back.