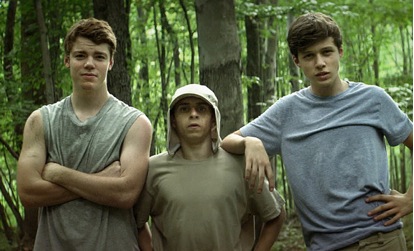 The Kings of Summer

The Kings of Summer is a frankly delightful film, full of hilarious one liners, a strong emotional cord wrapped around a coming of age story, and awesome characters. It tells the story of Joe, a sarcastic  high school freshman with a chip on his shoulder almost as big as his imagination, who convinces his overly-coddled best friend, Patrick, to run away from home and spend the summer living in a shack they made in the woods. Along the way, they pick up Biaggio, the type of kid for whom the terms “socially awkward” are a compliment, but who will fight to the death for a friend. The boys embark on a summer filled with shenanigans, all in pursuit of the elusive concepts of “freedom” and “manhood.” Their parents don’t seem overly concerned about their disappearance, although they maintain a search, and the woods contains a slightly ominous threat of starvation or serious injury, but that isn’t taken too seriously.

No, the only real threat to the boys’ happy lifestyle is (you guessed it) girls. When Joe invites his long-time crush into the Boys Club, their summer of masculine bonding ends. Eventually, Joe is left alone to figure out why he’s so angry and how he can be a better person.

I thoroughly loved every moment I spent in the theater.  The cast was almost universally strong. Nick Robinson made Joe particularly impressive, since the main character in these types of movies is normally more of a cypher onto whom the audience is invited to put their own face. Instead, Robinson was a pubescent charisma explosion, and the movie isn’t afraid to mock his protestations of manliness. Nick Offerman does a great job as his dad, who we mostly forgive for his poor parenting because he’s Ron Swanson.

That may all sound dismissive, but I don’t mean it that way. The reason these movies keep getting made is because that moment – the moment where you realize that the world isn’t an infinite landscape of your imagination while also doubling down on the romantic relationships that will come to define the next part of your life – is rife with comedy, pathos, and an elusive truth. The Kings of Summer does all this perfectly.

But what really makes The Kings of Summer stand out is just how damn funny it is. Or, as my movie-going friend put it, “that movie gave me everything I wanted from it. Plus Biaggio.” The movie’s sense of the weird, especially as typified by Biaggio and Moises Arias’s (The Middle, y’all!) batshit performance as him, helps to elevate the traditional coming of age story beats and make The Kings of Summer a near-perfect summer movie.