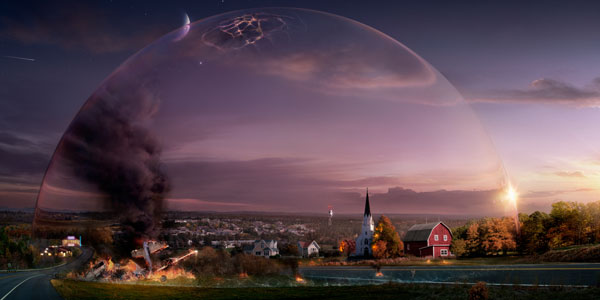 Pilot Watch: Under the Dome

“I get my news online, just like everybody else.”

For the vast majority of my life, and for a good chunk of time before that, tv has been a desert in the summer. All the shows on all the networks wrapped by the last week of May, turning the tv landscape into a wasteland filled with reruns, cartoons, and baseball games for the next three months. This traditional model began to change in the past decade as a result of the rise of the cable networks. Free from the constraints of the standard formula of 22 episodes a season, with big events in November and February, and breaks around the major holidays, cable channels began to experiment. Now as the traditional September-May season is becoming increasingly irrelevant, the major networks are starting to offer new programs in the summer. CBS has staked their claim in the summer schedule with Under The Dome, a sprawling miniseries, and summer tv just got a lot better.

Under The Dome is centered on the small town of Chester’s Mill, located in an unnamed Midwestern state. It would appear somewhat idyllic, if one of the first images wasn’t a corpse being swiftly buried in the woods. The show spends the first few minutes introducing us to the locals, including Big Jim, owner of a car dealership and town council member, Police Chief Duke and his deputy Linda, teenaged siblings Angie and Joe, Phil the conspiracy believing radio DJ, Julia the local reporter, and Dale, a mysterious drifter trying to get out of town. We get to see a moment in their lives, and they come across as real people, having a normal day. But that changes really quickly.

Tremors and thunderous noises are the only warning they get as a barrier descends over the town, ending  all communication with the outside world. The dome causes trucks and planes to crash, severs limbs, and, in one incredibly memorable image, cuts a cow clean in half. The barrier is clear and invisible, gives off an electric charge, and appears to be completely impenetrable. The first episode is primarily focused on the immediate havoc and mayhem that the dome causes in the town. Electricity goes out, people get violently injured, there’s a mad dash to get drivers off the road, and everyone is panicked and afraid. The two leaders that emerge right away are Big Jim and Duke, who immediately go to work helping the injured, and calming the fears of the town. But these two are not clear cut heroes as Big Jim seems to have some nefarious background motives which force Duke to make a hard decision for the good of the town and create an uneasy truce between the two.

The cast of Under The Dome is made up primarily of character actors, and the show is stronger as a result. Jeff Fahey, aka Lepidus from Lost, totally seems like the small town sheriff that everyone trusts and listens to. The primary male and female protagonists seem to be Dale and Julia, played by Mike Vogel and Rachelle Lefevre of Cloverfield and Twilight fame respectively. They both seem inquisitive and action oriented, and Dale in particular doesn’t hesitate to leap into the fray. The highlight is the casting of Dean Norris, aka Hank from Breaking Bad, as Big Jim, and he is perfect for this character. He has the right qualities of an average joe guy, who is also very charismatic, and has no problems getting people to listen to him. And when Big Jim needs to get mysterious and menacing, Norris is able to portray the calculating and cunning persona that’s hidden underneath. The cast of Under The Dome seems strong (despite the fact that there is one character who goes crazy a little too quickly) and do great job of making Chester’s Mill seem like a real place with real people you should care about.

Under The Dome is based on a novel by Stephen King and was developed and produced by acclaimed comic book author Brian K. Vaughn, both masters of storytelling. Vaughn in particular has made a career out of creating original comic series which follow a large group of characters across dozens and dozens of issues before reaching a well-thought-out conclusion. This is not some weird show thrown together just so CBS could air something on Mondays during the summer. In fact, it almost feels too good for network television, more akin to something found on Showtime or FX. Under The Dome is a very good show, highlight by a diverse and talented cast, and it’s worth watching just to see if this thing completely falls off the rails. If the show manages to meet the high bar set by its pilot, it could be an indication that the dog days of summer on network tv may be over.