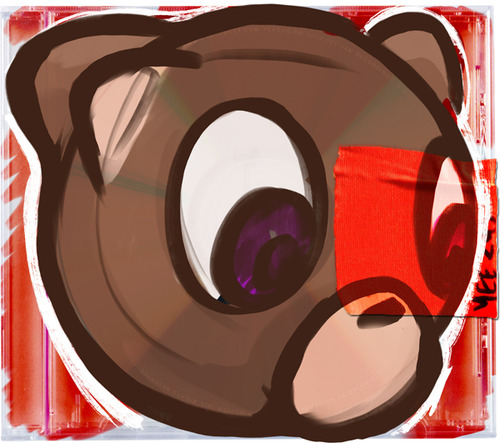 “Holy shit.” That’s what came out of my mouth when I got through this album for the first time. I simply muttered that under my breath, took my headphones off, and went to the fridge where I just stood for a good minute lost in all the labels looking back at me. I’m not saying that I may have been consumed by what just happened but I knew something radical popped off. Now, whether that moment was good or bad, I’ll really never be able to say.

Yeezus is Kanye West’s sixth solo album, his first since the universally acclaimed My Beautiful Dark Twisted Fantasy in 2010. If there was such a thing as “rap-opera” I would call MBDTF exactly that. It was sweeping, focused, grandiose but aggressive. Yeezus takes what was aggressive then, compounds it, and adds a snarl to it West not only projected on SNL but embodied during a few recent live performances. He’s hungry and it shows throughout the ten song blitz. The production is visceral and a hybrid of house & industrial. Sounds clash and grind, voice modulations grind against many of the layered vocals all while sirens blare throughout. Calling this a loud album is an understatement and listening to it in passing isn’t something you can really do. ‘Ye challenges us and within that has led to this album being extremely polarizing – much like his real persona.

Yeezus, beginning with the name itself, brings forth quite a dichotomous reaction from the fanbase. Half probably chuckled and went, “Oh you crazy, crazy man,” while some others may have been turned off to the comparison. Lyrically, Kanye boasts about an array of topics but also has moments of sobering clarity. “Blood on the Leaves” is one of the standout tracks on the album in that latter category. For somebody of Kanye’s status to be talking about ‘being somebody’ and reminiscing about a time where things were so good with another they were of out of their bodies it’s jarring. A man who consistently is under scrutiny but praised at the same time musically surely has inner conflict but his reflective rather than reactive delivery of this conflict is something that hasn’t been heard since 808’s & Heartbreak. It’s refreshing. Sadly, with what could have been this extremely poetic album, Kanye has his well Kanye moments and throws out lines like “In a French-ass restaurant/Hurry up with my damn croissants” or “I be speaking Swaghili” which gets a laugh, don’t get me wrong but there’s some great themes that are scratched I’d rather see explored. That depth is what added to MBDTF’s wholeness – its scope.

Yeezus is one of the more interesting releases of the year but its not saying much because competition is slim. J. Cole’s Born Sinner is an absolute jaw-dropper and Tyler, The Creator’s Wolf maintains a great level of intensity throughout. All three albums are mostly self-produced. All three have elements that make them unique from the others. Kanye’s name is obviously much more in the house than the other two but I don’t know if Yeezus will be able to keep its place on the shelf as strongly as Born Sinner and Wolf will. But who knows, would I even be talking about this album if anybody else released it? That’s the spotlight West is in and the surrounding darkness can get to anyone; Yeezus is West’s reaction to that.