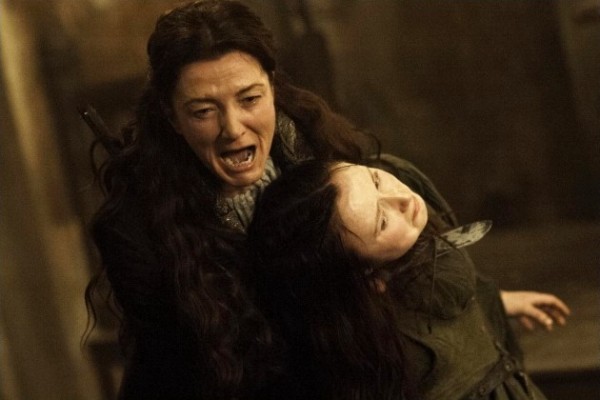 Game of Thrones 3.9 ‘The Rains of Castamere’

“The Rains of Castamere” is a bit of a blur. I know what I saw, but I haven’t fully comprehended the magnitude of the situation. Even for those who read A Storm of Swords, the devastating betrayal in this week’s episode tops just about every other scene from the show, or any other scene on television for that matter. This individual episode was as brutally gut wrenching as the meatpacking sounds from Fight Club or the Crazy 88’s killing spree from Beatrix Kiddo in Kill Bill (both nearly earning the film’s NC-17 ratings). For those invested in the show, the all-encompassing feelings of tragedy, hopelessness and barbarity are natural—enjoy.

Overlooking his chess-like war-board, Robb lets his mother in on his plans for taking Casterley Rock. After going against her wishes with Theon, he chooses to ask her advice this time. While she agrees that taking Casterley Rock is risky, it’s time for the Lannisters to understand what it’s like to lose the things most precious to them. After arriving at the wedding for Lord Walder Frey’s daughter, Robb apologizes for breaking his oath and passing up on one of the man’s daughters as a bride. Frey ogles Robb’s bride Talisa and admits he too would pass up his daughters for a chance at such a beautiful, curved female. Frey comments, “The wine will flow red and the music will play loud and we’ll put this mess behind us.”

Jon Snow and Ygritte’s loyalty are tested once again when it comes down to murdering a fellow Crow. The Wildlings come upon an elderly horse breeder. Snow pleads for the Wildlings to simply let the man go and he even pushes Ygritte to keep her from hitting the man with an arrow. The Wildlings not only ignore his wishes, they force him to take the man’s life with his own sword to prove his loyalty to the band of savages. Meanwhile, Bran, Rickon, and Hodor are in an abandoned windmill above the growing confrontation when Hodor begins to panic due to the thunder. As Hodor’s yelling brings attention to their proximity, Bran uses his warg powers to control Hodor and put him to sleep. On the ground below, Ygritte chooses Snow over the Wildlings, but he hops on a horse during the scuffle and rides off without her. On a positive note, he finally kills Orell and leaves him for dead. During his getaway, Bran takes over the minds of the two direwolves—Summer and Shaggydog—to fight off the Windlings and protect his brother.

Daenerys sends her top warriors with Daario to take the city of Yunkai. Jorah seems skeptical about their plan to follow Daario but he finally gives in when Grey Worm reveals that he trusts Daario. Meanwhile, Samwell spills details to Gilly like a character talking directly to the audience—awkward but informative. After he’s finished, Gilly asks how he knows so much information. Admitting he learns from reading books, she is surprised that he can recall so much from “staring at marks on paper,” commenting that he must be a wizard to know so much. In terms of story, the love interests and sparks between Daenerys and Daario, Samwell and Gilly, and Jon Snow and Ygritte toss in some charming appetizers before the kitchen ignites into flames.

At the wedding, Walder calls for the bedding ceremony between Roslin and Edmure. Talisa admits that she feels the bedding ceremony is a strange custom. She then admits that she wants the baby inside of her to be named after Robb’s father, Ned Stark (Eddard). Moments after this touching moment, the banquet doors close and musicians begin to play “The Rains of Castamere,” which is a Lannister victory song. Recognizing the song, Catelyn calls out for Robb. Walder rises to make a toast while simultaneously signaling for his men to attack. Lothar begins to stab Talisa in her stomach, ruthlessly aiming to kill the unborn child and leave her for death. Robb is shot with crossbows until he falls to the ground, stricken with confusion and too numb to react. Frey sips his drink and watches the bloodshed unfold according to plan.

Catelyn, a human pincushion of arrows, grabs Frey’s young wife and holds a knife to her throat. With nothing to lose, she pleads for Frey to let Robb live. Raising his glass for another sip, Frey says he will simply find another wife. Bolton walks up to Robb and stabs him in the gut, commenting, “The Lannisters send their regards.” Robb falls next to his fallen bride and Catelyn cries out while slicing Frey’s wife’s throat. Screaming and waiting for death, the catatonic woman stands alone until she too is killed from a blade to the neck.

While those visual scenes will stick with you, the psychology of the characters left behind sets in a little later. Consider young Arya outside, only a few feet away from being reunited with her brother and mother, now captured again to ride off with her occasional savior, The Hound. Bran was close enough to touch Jon Snow before they were separated once more. Ygritte is left to watch her man ride off in the sunset, while she stands with the men she just betrayed. The entire episode invited the idea of a Stark reunion, only to leave the family further apart than ever before.

Perhaps the most deafening moment involved Catelyn’s final moment of screen time—standing in anguish, believing she has lost all of her children to war, watching a grandson die before taking his first breath of air, recalling her missing daughters, and the overall end to her family name due the stubbornness of a son and merciless demeanor an old man with ugly daughters. She aimlessly takes the life of Frey’s wife, as if she simply needs something to do with her hands in a moment of desperate madness. Right outside the door, the true heartbreak falls on Arya, her survival nearly as awful as the death of another parent, falling before her eyes.