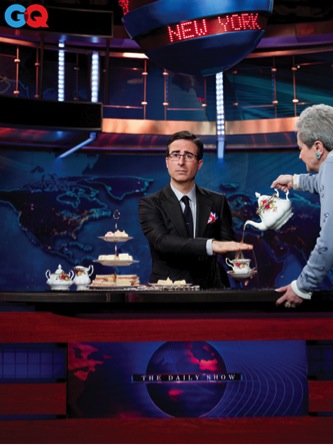 Last week, Stephen Colbert came back on the air after a one week hiatus and spent the first five minutes of his show in uncharacteristically honest form. With the exception of a few jokes, he vacillated between real, pained tears and heartfelt sentiment right until the moment when he gathered himself together and said “This, is the Colbert Report.” Just typing that up got me a little teary eyed. The moment was affecting and profound, even though I’d never known Stephen Colbert’s mother and, most of the time, we don’t even know Stephen Colbert.

It got me thinking about the relationship we have with our Comedy Central late night talk hosts, especially given the real impetus for writing this article: this summer, Jon Stewart took his first long-term break from his hosting gig over at The Daily Show to direct a movie in the Middle East. In his place he left the more-than-capable Jon Oliver to fill his seat.

Oliver is consistently funny, and he has an obvious rapport with his fellow correspondents and with guests. But this is Stewart’s show (it says it right there in the title), and it’s incredibly obvious that Oliver is there to keep us amused while we wait for the big man to come back. The writers continue the same level of funny/insightful, but with the exception of a few “I’m British” jokes* the show isn’t being tailored to Oliver and his personality.

Much like how Stephen Colbert’s pain became quickly my pain because of the years we’ve spent with him, The Daily Show continues to feel like Jon Stewart even without his face on it. A lot of what we think of as “Jon Stewart” or “Stephen Colbert” exists in the cracks we fill in while watching their funny and really smart half hours. I don’t necessarily think the Jon Stewart I’ve built up in my head from watching The Daily Show is any more real than the Stephen Colbert I’ve constructed from The Report. If anything, the ease with which Oliver sits back into Stewart’s chair indicates this fact, belies the artificiality of our concepts of these hosts.

But since the show isn’t tailored to Oliver, it also makes me realize just how lucky Comedy Central got when it built itself around the idea of Jon Stewart (and later Stephen Colbert) and reflect on the immense amount of trust we therefore put into these two men. The closest parallel that I have for it is the way our parents and grandparents speak of the news anchors of their childhood, the Walter Cronkites and Edward R Murrows of the world. In a decade when even our good newsmen occasionally seem like buffoons at the whim of the news networks they work for (I’m looking at you, Anderson), Stewart and Colbert have created around themselves a tiny oasis of, dare I say it, integrity. We invest a lot in them as individuals. Even if a lot of that individuality is made up for our benefit, it’s still kind of beautiful. Edward R Murrow ran around the world having affairs – that didn’t make him any less of a newsman. The faith and respect I have for Stewart continues even with John Oliver at the fore. It continues precisely because he clearly surrounds himself with people just as smart, honest, and insightful as he is, because he has a staff that loves him so much that they can’t help mentioning him every episode, and because he does things like direct a passion project in the Middle East.

It seems to come up every once in a while that Colbert or Stewart might be moving over to the networks to take over for the Lettermans and Lenos of the world. I certainly can’t say that will never happen, but it would be a shame, not just for Comedy Central and the two powerhouse shows that anchor it at 11:00pm, but for the world of news. Stewart once claimed that he was just a comedian that came on “after the puppets making crank phone calls,” but the relationship between him and his audience is real and essential to our democracy (as ridiculously overwrought as that sounds).  Oliver is doing a great job guest hosting, but I am looking forward to the day that I have the right Jon back in the anchor seat.

* The segments that have actually really benefited from John Oliver as host are the pieces on immigration, to which he brings a righteous fury and clear love for the American immigrant experience. It’s been an interesting, and essential, piece of his summer.