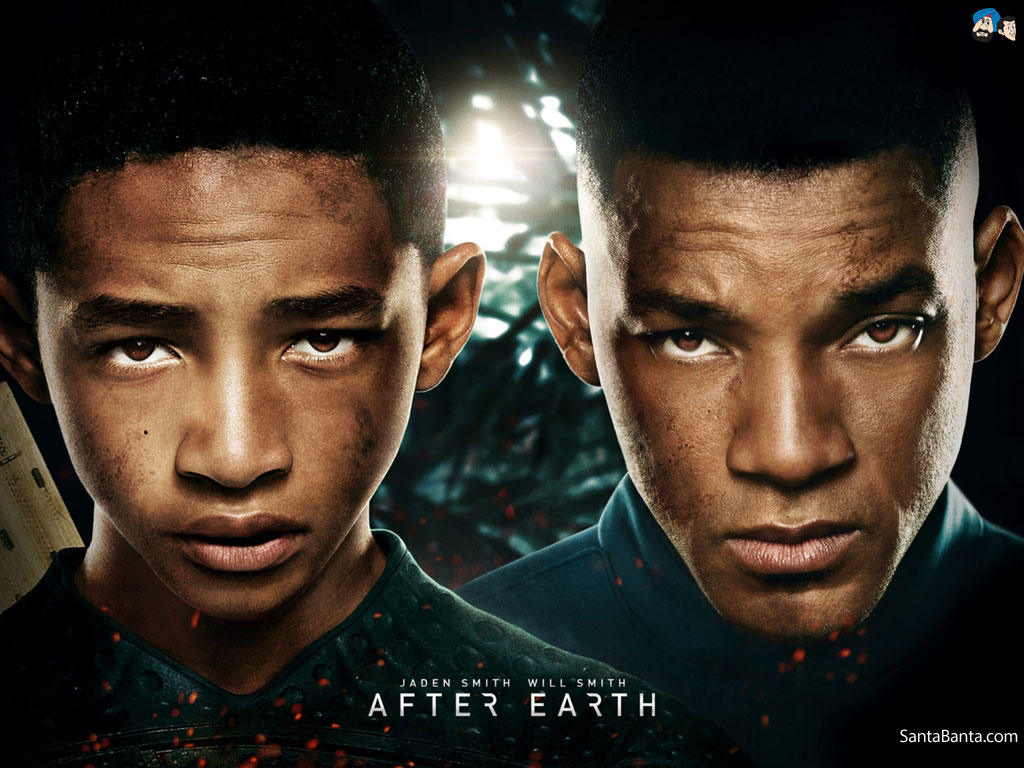 “Danger is real. Fear is a choice”
–Possible Scientology Propaganda

I like Will Smith. You like Will Smith. Your grandmother likes Will Smith. Everybody likes Will Smith. So we’ll all like a mini Will Smith, right? That is basic conceit of After Earth, the new Will Smith movie that’s not really a Will Smith movie. The film is set more than a thousand years in the future after humankind has abandoned a polluted and toxic earth and settled a new world called Nova Prime in a faraway solar system. This new world featured dangerous predators known as Ursa who, while physically blind, can locate prey by smelling the pheromones secreted during panic. They can literally smell fear, in an interesting if not heavy handed concept. The once and future Fresh Prince plays Cypher Raige, a General in the peace keeping Ranger Corps, who has the ability to “ghost”, meaning he can remove all fear from himself and become invisible to the Ursa. This allows us to see a pretty badass opening scene where Will Smith casually walks up to a huge monster and kills it without flinching. But while Raige knows a lot about being a General, who doesn’t know a lot about being a father (cue music swells).

The real lead in After Earth is Kitai, played Jaden Smith doing double duty as Will’s real life and on screen son, who is desperate to follow in his father’s footsteps. At the start of the film Kitai is a cadet in the Corps but is denied admittance to the Ranger program for at least another year. Kitai’s father returns home that day after a long mission, and Kitai feels like a disappointment. Their relationship is already strained because Raige’s older daughter, Kitai’s sister, was killed by an Ursa when Kitai was a small child. Kitai was hidden during the attack and feels like he should have done more to protect her, while the older Raige has a lot a misplaced anger because he was not there to protect his own family. After a conversation between Raige and his wife, his decides that some father-son bonding is needed, so he brings Kitai along on training mission to another world. A sudden asteroid field damages the ship and forces it to crash land on the nearest hospitable world, which happens to be the long ago abandon and quarantined Earth. After the crash, Kitai and Raige are the only survivors, and the General’s legs are badly broken. The tail section of the ship split apart in the crash and landed dozens of kilometers away, and also contains the only working emergency distress beacon and it’s up to the young and inexperienced Kitai to retrieve it before he and his father both die.

After Earth is directed by M. Night Shyamalan, although all the advertisements for the film did an excellent job hiding that fact, probably in hopes of distancing itself from the director’s last couple of films which were not financially or critically successful. After Earth, while not featuring a trademark Shyamalan twist ending, does continue his trend of slight over sentimentality and on-the-nose metaphors, such as the main character having to literally overcome fear to be successful in his journey. Having said that, this is a beautiful film to look at. The ship scenes has the appropriate sense of claustrophobia, while as soon as Kital begins his trek through the wilderness, we are treated to gorgeous shots of a world and animals that have thrived in humanity’s absence. Say what you want about his story telling, but Shyamalan definitely knows where to point a camera.

Jaden Smith, who carries the bulk of the film, was not as bad as I thought he might be. Yes he does get whiny once or twice too often, and lacks the on-screen charisma as his father, but there was the potential that his performance could have made the film unwatchable, and it didn’t. The film even seems to suggest that the fact that Jaden/Kitai doesn’t have the same presence of his father is really the whole point of the movie. We’ve seen Will Smith save the world and punch aliens in the face, so we know he can do it again, and the fact his survival is completely in the hands of someone vastly inexperienced helps towards creating a sense of uncertainty. Will Smith is actually really good in his supporting part. There are moments where the camera lingers on his face for long stretches of time, and Smith really conveyed his characters conflict between being an unstoppable warrior and an absentee father.

In the end, After Earth is an ok film. Not great, but not so terrible it’s beyond redemption. It does get too corny, schmaltzy, and literal at times, but manages to avoid going completely off the rails. It’s a summer popcorn movie to see at cheap night at the theatre, or download for a couple bucks off iTunes. After Earth is visually beautiful, Will Smith makes the most of his supporting role and really grounds the movies, and, despite all its flaws, this is best film M. Night Shyamalan has done in years.