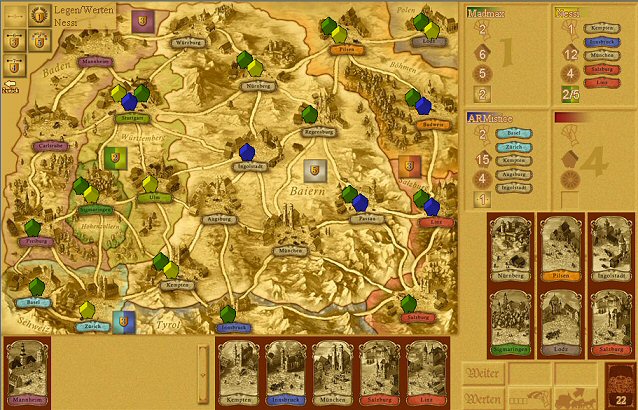 “Mommy Mommy!”
“What is it, little Andreas?”
“I want to play a game!”
“What kind of game, my darling?”
“One where I can help develop the postal infrastructure of 16th century Bavaria!”
“…”

While such a conversation may or may not have taken place in the Seyfarth household, it should have because the end result is absolutely delightful.  From the creator of Puerto Rico and the same company that brought us Agricola comes a delightful game which will remind folks of Ticket To Ride and in pure Eurogame fashion, its concept both intrigues and translates into rather robust game play.

In Thurn and Taxis, each player represents a burgeoning mail company trying to deliver mail, set up routes, erect post offices, and build their tiny empires.  This is done turn by and turn and players are given a few very key options that gives each turn a sense of strategy and chance.  All the players draw from a selection of cards that are visible to everyone and then play these cards down in order to establish their routes.  Points are scored for establishing long routes, building post offices in different regions, and generally being the first do these things.

Each turn, a player has the option of using a specialist which really gives the game a nice strategic field.  You can either draw two cards, play two cards, replace all the cards currently visible (Something the player after you is usually quietly dreading), or earn more points for a completed route.  These choices are simple but they really make each turn count and one is seldom left with the feeling that they are completely without options.

One thing I like about this game over other “train” games is that no-one can ever be locked out of a city or a route but instead, there are diminishing returns for being the second, third, or fourth player to accomplish something.  The game ends when the first player plays their final post office and then it’s a quick points tally and you’re good to go.I heartily recommend this game and look forward to jumping back on the wagon and getting the mail from Lodz to Innsbruck.  Come rain or sleet or Thirty Years War!