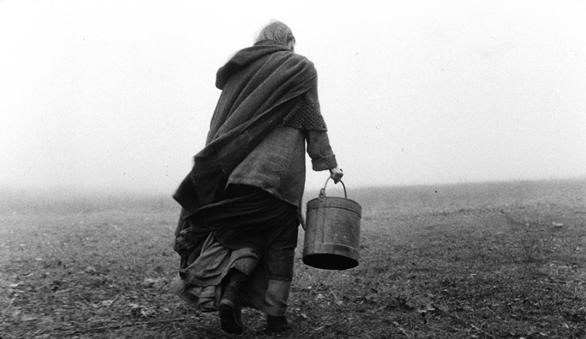 One of the most respected figures in world cinema today, Hungarian film auteur Bela Tarr- known for his distinctive highly stylized black and white long takes, apocalyptic stories and melancholic rhythm enhanced by a dramatic score from Mihaly Vig-  delights his audience with one last hypnotizing cinematic experience The Turin Horse (2011). Embodying the cinematic qualities of his earlier work Damnation (1988), Satantango (1994), and The Man from London (2007) as well as the unmistakable minimalistic essence-du-Tarr style, this multinational production is declared to be the last one in Tarr’s career.

Shot on the director’s preferred 35mm celluloid film, The Turin Horse takes place right after German philosopher Friedrich Nietzsche’s rescue of a horse from the whip of his custodian in Turin in 1889. Intrigued by what happens to the horse afterwards, Tarr’s wild imagination crafts an abstract story about an aging farmer, his hard-working daughter and their deadbeat horse. Set on a farm somewhere in late 19th century Hungary, in the middle of a “barren land” where the wind storm never takes a rest, the narrative unfolds over five days with a deliberately slow pace (typical Tarr) and reveals the ritualistic everyday routine of the household. Small obstacles are thrown at the family each day, provoking despair in the characters’ lives and resolving into small variations of the ritualistic scenes.

As if imbued with the absurdist essence of Samuel Beckett, this seemingly challenging film is surprisingly simple. Following Tarr’s minimalistic style demanding “an absolute minimum of storyline and an absolute maximum of monolithic detail,” the film calls for various interpretations, yet what it offers is a pure exploration of time and space. In the end, this abstract body of art containing minimal non-expositional dialogue and soulless characters who reveal no emotions, appears to be a lot more intimate and realistic in its depictions of the daughter’s daily chores and of the struggles of the farmer trying to get by each day with his disabled arm. Unlike other abstract films likely to distance the audience from character and space, Tarr’s hypnotic cinematography and stunning composition of each frame, instead engages the audience in the characters’ misfortune.

Following Godard’s words: “A proper film director cuts to the camera,” Tarr’s devotion to cinematography and mise-en-scène screams out loud that film is a visual art, after all. Once asked why he prefers the black and white image, the director replies: “Because it looks stylized.” In his previous work as well as in The Turin Horse, the meticulously choreographed long takes are mesmerizing as the composition of each frame carries nothing but the quality of high-end still photography. A feast for eye and mind — each frame offers the exploration of simple objects (a gasoline lamp, a steaming boiled potato on a plate, etc.) — hard to determine whether the image has a meaning or it’s simply there to enjoy.

Often compared to the work of the silent era for his tendency to shoot the images eye-level horizontally (pan from left to right) avoiding any tilts of the camera, Tarr’s cinema is also considered to carry the aesthetics of Max Ophül’s choreographic cinema capturing the complete arc of actions. Nevertheless the filmmaker’s emblematic work is represented with its exploration of depth of field — fluidly expanding/minimalizing space — achieved with shots- within-shot style photography. This distinctive style, incorporating optical zoom and dolly movement, enhances the long uninterrupted scenes with different nuances, described by Tarr’s director of photography Fred Kelemen as “thinking image.” Such in The Turin Horse are the numerous scenes capturing the father looking through the window. The scene begins with the camera focused on the father’s point of view lost outside the window, then gradually evolves into a larger shot of the living space and later a view of his daughter sewing at the table — each conveying different meanings and emotions within the viewer.

Proclaiming that “The viewer does not need to be over-informed; he only needs to be shown,” Tarr’s Turin Horse offers exploration of various themes such as power, survival, creeping old age, and apocalyptic despair, yet at its core the film carries great simplicity, encouraging the viewer “to get closer to the real things.” Unlike his philosophical early works, overwhelming the viewer with sophisticated narrative and theories, here, instead, the post-modernist leaves a psychological impact on the audience visually – SHOWING! that “the world itself is maybe simpler, maybe richer.”