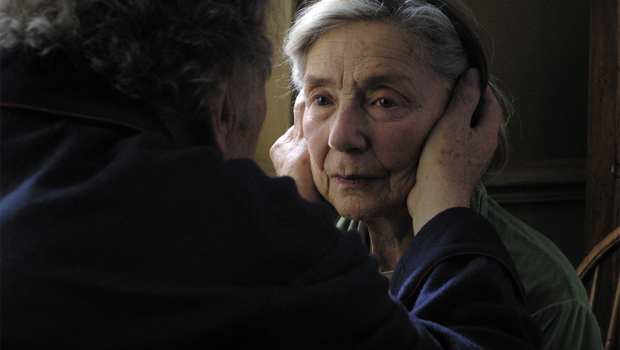 Take a box of tissues and leave your grandparents at home, Michael Haneke is in town! The Austrian writer/director who brought us The Piano Teacher (2001), Cache (2005), and the critically acclaimed 2010 Golden Globe Best Foreign Film winner The White Ribbon (2009), makes a return with another darker-than-ever psychological family drama, Amour (2012). The film- which received several nominations at the 2013 Academy Awards (Best Actress in Leading Role, Best Original Screenplay, Best Director, and Best Picture) and took home the Oscar for Best Foreign Language Film- offers an incredibly realistic exploration of love as it pushes the relationship of an elderly married couple to its limits.

Set in modern day Paris, Amour entirely resides in the home of retired intellectuals Anne (Emmanuelle Riva) and Georges (Jean-Louis Trintignant). Besides a great appreciation for the arts, the adorable couple shares a great deal of witty sarcasm and dark humor mocking their old age. However, the harmony in the life of these soulmates very soon gets interrupted by Anne’s sudden illness demanding a surgery. Instead of improving her condition, the procedure results in a paralysis that eventually takes over the entire body. Seeing the end, Anne makes one last wish: “I want you to promise me,” she begs, “to never take me back to the hospital.” Completely aware of the consequences, Georges accepts the situation and proceeds with admirable fortitude.

Known for his dark depictions of human relationships, Haneke isn’t holding back, although this time he pushes the limits of compassion to the extreme. As the story advances with its harsh realism, capturing Anne’s agony every step of her one-way journey, the humor gradually winds out and the only thing left to admire is the remarkable acting work of Riva and Trintignant, executed with exceptional intensity and internalization of emotions. Implemented by a series of deliberately long takes capturing the characters alone, the camera gains an access to the deepest, darkest side of the individual’s mind, encouraging more questions rather than offering answers.

Unlike its characters’ complexity, the story appears to maintain an ordinary appeal throughout, heading in the direction of a predictable ending. Sadly the mid-turning point arrives too soon in Amour and the second act carries more of the same, only Anne becomes more “unrecognizable,” Georges more internally impatient; and the privacy of the couple gets interrupted by the helpless visitations of nurses and uptight family members who seem to contribute more tension to the situation than anything else. In the end, even the obvious jump cuts cannot make the ending come soon enough. Instead, the agony seems to take forever and the film becomes painful to watch.

A breath of fresh air, however, arrives briefly in Amour during Georges’ encounter with a lonely pigeon intruding through the apartment’s window. His attempts to chase the stubborn bird out resolve into a slight comical relieve. A glimpse of Anne playing the piano in the living room from back when she was well makes an attempt, too, to tear up the oppressive atmosphere. Yet, none seem powerful enough to distract the characters from seeing the impending doom. Instead, an almost sadistic cavalcade of unmerciful shots of Anne’s deteriorating body diminishes any sight of light coming to the grim apartment where the camera stays throughout the entire film.

To keep the consistency in his heavy drama, Haneke chooses to end the film in dead silence, forcing a reminder of the brooding mortality. However, the overpowering manipulative features of Amour greatly contradict the director’s filmmaking philosophy of rejecting all mainstream cinema patterns that “deny the viewer room to think”. Here, beyond the recurring bird motif, the preachy narrative leaves no room for wonder. Nevertheless, the filmmaker succeeds again in his main agenda “to get closer to reality”, remarkably recreating the oppressive atmosphere of a domestic hospice, making another clear “polemical statement” against the “American ‘barrel down’ cinema and its dis- empowerment of the spectator.” Well, kudos to Mr. Haneke for saving us the trip to the nearest sanatorium, observing it in the comfort of a velvet seat is much less depressing!