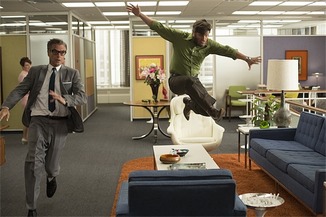 “I’m not from somewhere other than this moment?”

Well that was weird. Mad Men has made it a habit to air an episode with a weirder bent to it around two thirds of the way through the season. Two years ago, it was the Rashomon-type of episode with the Sorbet, last year was Roger’s acid trip, and this year it’s the whole office on “vitamins”. Which leads to one hell of a long three days for the gang at Sterling Cooper-Whatever-Their-Name-Is-Now.

We start with Ken going on a crazy car ride with executives that has the appearance of a fever dream. We then find Don coughing and hacking in the office while trying to focus on the Chevy campaigned. It’s not going well, as Chevy has rejected all of their proposals, and are demanding more options immediately. The staff line up to meet with a doctor who will give them “vitamins” that will allow them a period of increased creative thought and energy that will last for days. And by vitamins, he totally means speed. Or speed mixed with something else, it’s never explicitly said what was in the needle. The end result is that the entire office is tripping out and acting crazy.

Here’s some of the highlights: Ken performing an incredible tap dance routine, Stan and Jim repeatedly racing each other around the office, day and night switching around, Stan and Peggy making out, a strange hippie girl wandering around the office reading fortunes, Stan sleeping with said hippie girl, the copywriters reenacting the story of William Tell resulting in Stan getting stabbed in the arm. Looking back on it, Stan had a bit of day.

The combination of drugs and chest cold gives another opportunity for Don to flash back to his youth spent growing up in a brothel. Young Don has come down with a similar cold and is made to sleep in the cellar to avoid spreading his illness. He eventfully meets one of the prostitutes who nurses him back to health, with soup and everything. As Don’s feverish memories grow more and more intense, it’s revealed that he also lost his virginity with the same prostitute. His step parents eventual discover what transpired, and young Don receives a harsh beating from his step-mother. These flashbacks suffer from the same problem of the flashbacks from earlier in the season. Don has a very complicated relationship with women and sex. By season six we are completely aware of this, and these flashbacks try to drive the point home even further, but to me it felt like repetition.

Although they are most absent from the first half of the episode, the Draper kids end up playing a big part in the rest of the story. After Don stays at the office to take a bad drug trip down memory lane and Megan goes out to network with industry types, Sally is left in charge of all the Draper kids at the apartment. Sally is used to having neglectful, narcissistic parents, so she gets everybody fed and into bed with no problems. Things are going great until she finds a middle-aged black woman going through their living room. The woman claims to be Sally’s grandmother, a claim that Sally quickly debunks, and then it switches to her having raised Don, so she’s like a grandmother. Sally questions the woman, but she seems to know the few things about Don that Sally does, so she doesn’t quite know what to do. Sally, being smarter than some of the adults on Mad Men, calls the police when the woman is out of the room, but she’s quickly caught. The moment where we have to wonder what this strange woman is going to do with the kids is genuinely tense, until the woman finally leaves the apartment.

When Don eventually returns to the apartment, the police are there to tell him that a thief had been burglarizing apartments in the building, and she was in here with the kids. Megan, the kids, and a blonde-again Betty are all mad at Don, who promptly faints. Later he calls Sally and tells her that he left the back door open, so everything that happened was his fault, not hers. Sally, meanwhile, seems have gotten over the situation rather quickly, and simply tells Don that she wasn’t able to disprove the thief’s story, because she doesn’t know anything about Don.

I like Sally’s reaction in this episode. She has been surrounded by adult who lie and deceive each other all the time. When ever Sally has been exposed to the adult world, wither it be through her parents divorce, her father’s affair with her teacher, and her step-grandmothers dalliance with Roger, it has proven to be ugly and “dirty”, as she once put it. So it makes sense that she is mistrustful. At the same time, Sally is clearly smart and has a curiosity regarding her fathers mysterious past. When the thief is able to stimulate this curiosity by claiming a relationship with Don, she avoids having Sally call the cops right away. As always on Mad Men, Don’s self imposed isolation affects not only himself, but also the people he’s supposed to care about.