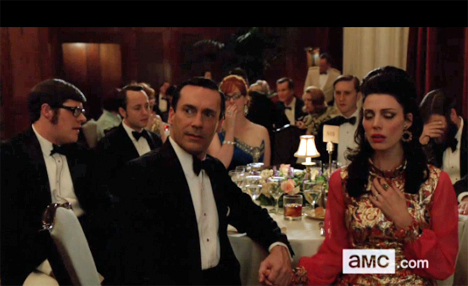 “We’ve already met. In fact, I’m pretty sure we’ve had this meeting already too and it went well.”

Mad Men has made it a point to keep episodes dealing with famous historical events focused on its character reactions, as opposed to the events themselves. This was the case with the assassination of President Kennedy in season 3, an event that precipitated Betty’s divorce from Don after years of infidelity. This episode dealt with another famous American tragedy, the assassination of Reverend Dr Martin Luther King Jr in 1968.

The episode opens a fancy, glittering awards show, with no indication of the dark events to follow. The gang from Sterling Cooper Draper Pyrce are all there, as is Peggy, who is nominated for work she did prior to leaving the agency. Their reunion is another in a long series of awkward moments the former colleagues have found themselves in during this season.  The ceremony barely gets underway when someone shouts the news of the assassination from backstage. The crowd is shocked, and quickly descends into chaos.

Pete seems to take the news on the most personal level, and he immediately reaches out to his recently separated wife. Despite his many, many shortcomings, Pete as always seemed to be among the most socially progressive characters on Mad Men. He was an ardent Kennedy support in the early seasons, and he was one of the few characters to show distaste when Roger performed in blackface. Here it seems that the social turmoil caused by the assassination mirrors the turmoil going on in Pete’s personal life. His wife Trudy, while shaken, refuses to yield. She breaks the paradigm set by Betty, and doesn’t let Pete come home, regardless of how pure his intentions may be.

Pete’s inner anger culminates in a near fist fight with Harry at the office the next day. Harry makes an incredibly callous remark about how the tv coverage of the assassination is interfering with their advertising and costing the company money. Pete acts outraged, while Harry merely states that he’s only doing his job. It’s up to Burt, who suddenly appears like a 1960’s Yoda, to diffuse the tension. We see Pete one last time, after he orders Chinese take out for one at his bachelor apartment, and is still clearly dealing with sadness.

We see glimpses through the other characters of many different attitudes towards the assassination. Ginsberg is both upset and relieved that on awkward blind date came to an end. Henry and Betty want strong leaders to step in and tow the hard line in face of social unrest. Henry finally gets the motivation to launch his own political career after being let down by the mayor’s history of compromise solutions. Peggy is somewhat persuaded to use the tragedy for personal gain, as it well help drive down the price of the Upper East Side apartment she is trying to buy. In the end, she doesn’t get the apartment, and is forced to have an awkward conversation with her boyfriend regarding where they should live. Peggy clearly feels that an UES apartment is a status symbol that she has earned, while her boyfriend makes her question who exactly she is trying to impress.

And Megan’s French-Canadian Marxist father is still a total dick.

Sometimes it seems like the children on Mad Men have a clearer view of the world than the adults. Or maybe it’s just that they have not yet been conditioned to lie and manipulate on a daily basis. They say what others are thinking but keep to themselves, like when Sally Draper realizes at grown ups are “dirty” after observing Roger and Megan’s mother cheating on their respective spouses.

Sally has been the main focus of the children stories on Mad Men, second child Bobby has always played a supporting role, attested by the fact that the character as been portrayed by a different young actor in almost every season. And does anybody remember that Gene the toddler even exists? Bobby finally gets some focus in this episode, after he observers that his bedroom wall paper fails to line up at the seams.  It’s a common trait among the adults on Mad Men, the small flaw that appears inconsequential at first but continues to grow as it gnaws away at your insides, and it seemingly has been passed on to the Draper children as well. Bobby foolhardy attempt to address the situation fails miserable, leaving a gash along the wall, subjecting him to Betty’s wrath. Betty is quite possible the most unlikable character on Mad Men, and that’s saying something. Here she reacts to Bobby’s tearing of the wallpaper by demanding to know why he’s trying to destroy their home. Everything is life or death for Betty, everything is an attack, leaving Bobby fairly helpless.

This episode marks an important moment in a child life: when they have solid proof that the world is a frightening as they always feared. It’s unclear if Bobby has any real memories of the JFK assassination that took place almost five years earlier in the show’s timeline, and this was not at time when the horrifying images of the Vietnam War were shown on tv, so the death of MLK is very likely he first exposure to the real death, violence, and terror that was an unfortunate part of the time period.

Another Don and Betty fight leads to the kids spending the day in the city, where the threat of riots breaking out at any second was a real concern. Bobby and Don take refuge in the movie theatre, and take in a screening of Planet of the Apes. Bobby comes across as a mini-Don, recognizing the power of fantasy and escapism that media can offer. Bobby speaks with an African-American usher at the theatre, and seems to subtly suggest that everybody is scared, and it’s ok to deal with that fear. “Everyone likes to go the movies when they’re sad.” he says, and Bobby might be going to a lot of movies over the next few years of his life.