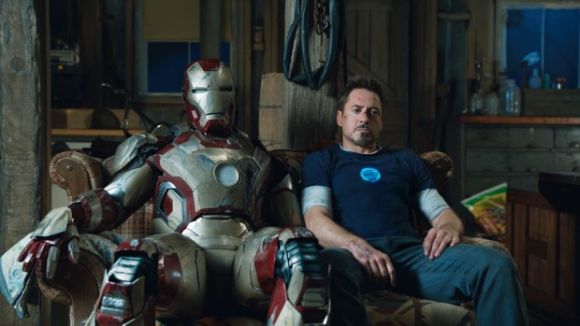 Director and Co-writer of the latest Iron Man installment Shane Black was handed an unenviable task: after a massive critical and financial success in the Marvel-verse, he got to follow it up. His smartest move was in creating an entire movie based on answering a question posed by Captain America in that expectation-busting flick, “Big man in a suit of armor. Take that off and what are you?”

Tony Stark, in typical Tony Stark fashion, answered flippantly, “genius billionaire playboy philanthropist,” but the question lingered. It was the motivating factor behind Stark’s suicidal rush skyward near the end of the Avengers. And it powers his solo-adventures in fascinating, brilliant fashion. In other words, when Gwyneth Paltrow stares forlornly in the trailer at a beaten up face mask of Tony Stark’s armor, is she looking at the best of him?

Shane Black and his Kiss-Kiss-Bang-Bang star Robert Downey Jr double down on Tony Stark’s identity crisis in an often-hilarious, emotionally satisfying, but way too long superhero epic. Black gets many, many things right about Tony. He smartly comes up with ways to help strip him of his suit-clad invulnerability. He ups the emotional upheaval, leaving us with a Tony Stark on 75+ hour work benders, and deftly weaves in symbolism about Tony’s relationship with the suit and emotional turmoil that turned him into a superhero with a subtlety most indie-film directors wish they had. He gets Pepper Pots, too, deftly demonstrating both why she’s drawn to her emotionally messed up boss and why she’s always one really bad fight away from leaving him.

And man does Shane Black get tone. He hits the notes perfectly, whether it’s in a darkly funny exchange in which Stark advises a father-less, adorable moppet to “not be a pussy,” or whether it’s through a ridiculous plot twist involving The Mandarin that makes all the controversy around potentially-racist implications of the character seem like part of the publicity machine for the movie. His Iron Man is funny and entertaining in all the right ways.

It’s also overblown. Shane makes awesome use of the Iron Man technology, finding ingenious ways of utilizing the suits that are both surprising and really indicative of just what makes Stark so much more than a man in the suit. But by the 15th scene, even this happy twist begins to lose its punch. And the ending is overly sincere. The voiceover that bookends the films (and pays off in a post-credit sequence you’ll have to get spoiled elsewhere) starts off chirpy and fun, but plays as a little overly serious as the film drives towards its conclusion. You could easily chop 15 minutes of action scenes and 3 minutes of conclusion out of the film without losing anything that makes it so good.

And it is SO GOOD. I went in with tempered expectations: I knew RDJ would be enjoyable, and I hoped to enjoy the stuff that surrounded him. Instead I got a seriously funny blockbuster action film where you could actually see all the money and thought that went into crafting it. Even as I bitch about it being a little too long, I laud the film for doing new, cool stuff with the blockbuster format.

It’s inevitable that all Marvel superhero films will now require the caveat of it not being as good as the Avengers. Fine, let’s get this out of the way: it’s not. But Iron Man 3 smartly walks the line behind incorporating that game-changing movie into its mythos and crafting its own, personal, Stark-based story. Rather than up the stakes (and how do you up the stakes from “aliens destroying earth?”) the movie follows Tony trying to make sense of his place in a world that involves planet-destroying aliens. His villain is really just an asshole scientist who mostly wants to piss Tony off. It’s a smart move in a smart movie that makes for a ridiculously solid summer movie going experience.