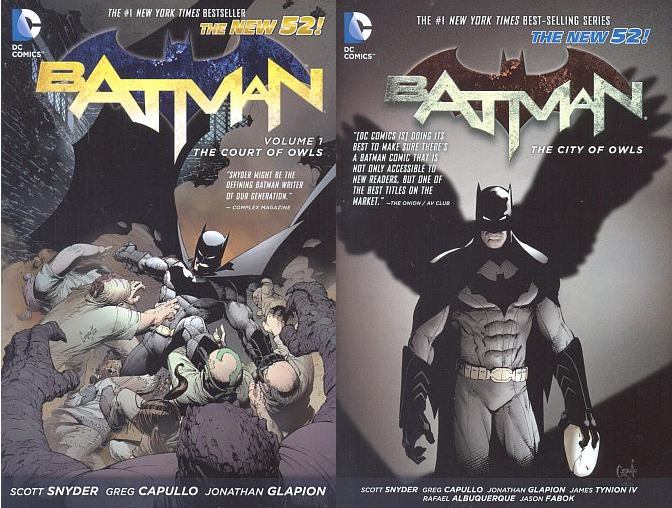 Batman: The Court of Owls

In 1939, the fledgling comic book company Detective Comics released the 27th issue of their self-titled series, and introduced Batman to the world. Seventy-five years later, Batman is still here, with a few changes along the way. If you are a fan of the comic books, you’ve probably heard of DC Comics’ New 52 initiative. If not, prepare to have your mind blown. In September of 2011, DC rebooted their entire line of books with a whole new continuity and new series numbers. Batman, Superman, Wonder Woman, everything restarted. Even Action Comics, the longest running series at issue #904, reverted back to issue #1. The burden of telling the first Batman story in this new continuity fell on the shoulders of writer Scott Snyder, and his “Court of Owls” storyline. And it became one of the best starts of any title in the New 52. Last month saw the release of the “City of Owls” trade paperback, which collects Batman #8-12. When paired with the earlier “Court of Owls” collection containing Batman #1-7, the first complete Batman story in the new universe is available in two easily readable volumes. It’s a story that’s about Batman, Bruce Wayne, the villains, the allies, and, most importantly, the city of Gotham itself.

The story finds Bruce Wayne/Batman firmly entrenched in his dual role as masked vigilante and powerful billionaire socialite. He has been juggling these roles for five years, in the new internal chronology, and the book begins with Bruce almost at his peak. He stops an outbreak at Arkham Asylum, fighting with many of his classic villains, and makes it back to Wayne Manor in time to change into a tux and attend a fancy fundraiser for the new Mayoral candidate. Bruce is confident he knows Gotham inside and out, from every angle. At least he thinks he does.

Soon it becomes clear that something else is going on underneath the surface. He saves the life of the idealistic Mayoral Candidate Lincoln March from an assassin. When Batman begins to investigate the crime further, he gets sucked down the proverbial rabbit hole, going deeper into Gotham than he ever thought possible. It all leads to the Court of Owls, a shadowy group used in nursery rhymes to frighten Gotham’s children with tales of their power and brutality. Batman is convinced that they don’t exist, because he knows more about Gotham than anyone else, so surely he would have come across the group by now.

Author Scott Snyder comes from a prose friction background. His short story collection, Voodoo Heart, was a New York Times Bestseller, and was widely praised by horror master Stephen King. What Snyder excels at is psychological terror. His stories aren’t scary because monsters jump out of the shadows, it’s what we think are in the shadows that terrify us. The “Court of Owls” storyline seems like a typical bad-guys-messing-with-city-politics plot, until Batman gets dragged down into the depths of the city that he thought he knew, and it turns out he didn’t know it at all. As the layers of Gotham are peeled back, so are the layers of Bruce’s psyche. By the time the story ends, Batman and Gotham are changed irrevocably.

The “Court of Owls” was an excellent way to restart the Batman universe*. Snyder is a very talented writer who knows how to create enemies that combat our heroes on an emotional and psychological level, which is almost more challenging than physical attacks. The art by Greg Capullo is vivid and lifelike, although when Batman’s psyche starts to crack, the art moves in a grippingly surreal direction. This is an excellent book. If you’re a fan of Batman and want to jump into the universe, the “Court of Owls” and “City of Owls” trade paperbacks are a perfect place to start.

*A note on continuity: Purists really freaked out when the New 52 was announced and it seemed like over half a century of comic book history was going to be wiped away. That’s not exactly what happened. Some characters where changed dramatically, others not so much. The continuity of the Batman books remained largely unchanged. The big stories, at least the recent ones, remain as canon. All the familiar characters remained at roughly the same place, i.e. Dick Grayson is still Nightwing and still was the original Robin. Everyone did have a few years knocked of their age, and the timeline got more compressed. The “Court of Owls” largely avoids continuity issues, so the book remains highly enjoyable for Batman newbies and purists alike.