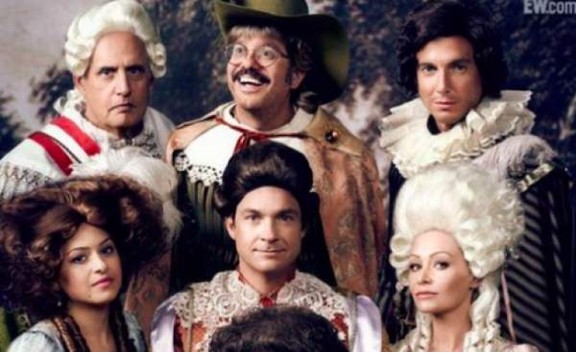 This is the story of a family who’s future was abruptly cancelled, and the one reviewer who had no choice but to marathon 15 episodes of television to talk about it.

For those of us initiated, either during the series’ original run or in the seven (7!) subsequent years, Arrested Development is a special beast. It has seeped into our daily language, with casual mentions of “blueing” ourselves or wondering “who would even want to R her?” I’ve spent more time discussing whether my friends were a “Lindsay, Michael, Buster or a Gob” than I have “Carrie, Miranda, Samantha or a Charlotte.” And it clearly still holds a dear place in the hearts of those who created it.

Thanks to these factors, Arrested Development was resurrected by Netflix for 15 episodes and maybe more. And the internet basically had a collective nerdgasm that threatened to end all entertainment coverage.

So what of the actual show? It is, unsurprisingly, funny, uncomfortable, challenging, interesting and littered with so many in-jokes and subtle one-liners that it is impossible to believe I caught them all while tearing through the episodes. It also looks and feels slightly different than the series we once loved, in ways both intentional and unintentional.

One of the major ways that the Netflix series differs from FOX’s cancelled show is that each episode focuses on only one member of the Bluth family. The intellectual part of me knows that this decision came down to budgeting and scheduling issues, but for the most part I actually loved the effect it had on the show. It allowed the show’s meticulous (insanely meticulous) plotting structure to play out long form, with jokes that pay off not later in the same episode, but later the same season (and a few that I think still haven’t paid off). Occasionally, it leads to a dud episode (and it definitely does no favors for the first two episodes, which end up seeming way less inspired and funny than I am sure they will be on rewatch), but it really highlights the brilliance that first brought Arrested Development to the comedic forefront.

I don’t want to delve too far into the plot (it’s a great joy to slowly unravel it, although I will say that it didn’t pay off quite as well as I was hoping and too much of it hinges on an enigmatic character played by Isla Fisher). I’d rather focus on the characters. Gob and George Michael are particularly well served by the new series. George Michael, despite being first introduced as “a nice kid,” doesn’t really get his due until the tail end of the season, but he’s great when he does. Gob, on the other hand, is the Bluth most well integrated with the rest of the story, and somehow managed to be at the center of the only Arrested Development love story I’ve ever cared about.

Michael is way more difficult to watch than he ever was in the original series, and the season is better for it. I feel like it’s become obligatory that I mention Portia de Rossi’s face when I talk about Lindsay, but honestly, she’s great bringing Lindsay’s particular blend of narcissism and complete cluelessness. The only character who’s return I didn’t really love was George Sr. Part of this was purposeful (he loses his mojo early on), but I didn’t feel like we got a full character arc on him. Additionally, we didn’t really see enough of Lucille for my liking, if only because I literally can not see enough Jessica Walters in my life.

Overall, Arrested Development more than lived up to the hype, but it was not a perfect season and it didn’t feel entirely finished. I think the plan is to bring it all together in a movie, which I’m sure will help explain the ostrich motif, significance of Lucille 2 at the end, and other hanging threads (because Hurwitz and co do NOTHING accidentally).  I’m also certain that the season will only grow in my estimation upon (frequent) rewatch, and will happily take its place in the Arrested Development pantheon. Season 4 was definitely a darker, different beast than what came before, but it left me incredibly excited at AD’s surprise second life and excited for the next round.