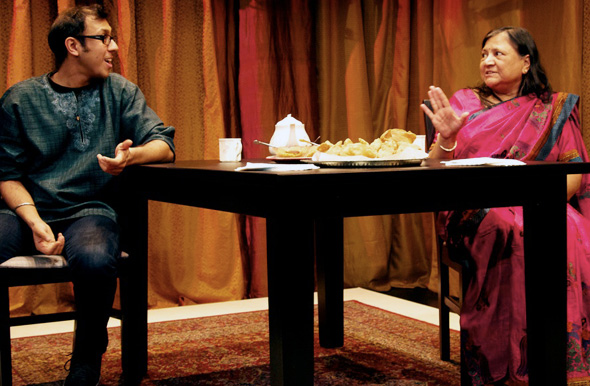 I cannot even begin to imagine what one could possibly find to say against A Brimful of Asha.  So I am glad I don’t have to.  It is flawless in its storytelling and staging. Ravi Jain, whose Why Not Theatre has developed a reputation in cross-cultural collaboration and producing of site-specific, as well as, community-based work, is able to demonstrate how those modes of creation can be tailored for smaller scale purposes.

This production is not site-specific, but we definitely forget that we are inside a theatre. We are greeted by Ravi and his mom (Asha Jain) themselves.  Ravi offers us samosas too.  The set designer (Julie Fox) has done a great thing by replacing standard black backdrops with bright Indian textile.  Complimenting the orangey-brown fabric are the projections (Beth Kates) on two monitors, of purple and gold Indian motifs which, in addition to adding ambiance, act as a background in between viewings of family photos and a map marking Ravi’s journeys to and through India.

And while this show does not engage with the plentitude of people that community-based work does, there is something to be said about this two-hander, mother-son duo – playing none other than themselves – who manage to activate the audience as if we were part of the plethora of family and friends characterized by the cast.  The spoken text is delivered in a casual everyday tone.  Ravi most skillfully manages to address audience commentary while adding spontaneous jargon jabbing at a tough mother, without breaking focus.  What is, perhaps, even more impeccable is that Asha, never having acted prior to the creation of this piece, delivers a syntax so real you would swear she is an experienced theatre practitioner.  His (their) story manages to deal with a topic that impacts everyone the entire world over: marriage.  And it does so by engaging intimately with fellow guests in their home over chai tea.  Mother and son enter a compelling and wildly funny debate: Asha’s historical and cultural prospective on arranged marriage are put to the test against Ravi’s insistence on finding love on one’s own time and terms.

This intergenerational and intercultural debate brings forth good arguments from both sides.  Asha has a strong lasting marriage to back her up, and lectures her son on the importance of eradicating the potential of loneliness and immaturity.  The longer you wait the more difficult life tends to become.  After all, we don’t fall in love; we grow it, so why wait?  And it can only be easier to grow when the garden is most fertile in the spring (of youth).  Right?  For Ravi – Canadian born and raised – the whole concept of having one’s entire romantic future with a potential bride delineated in a matter of hours screams crazy.  At the centre of the show is the wild goose chase throughout all of India between Ravi (on vacation) and Neha, the lovely lady from Bombay who Ravi’s parents (conveniently having taken a holiday at the same time as their son to line up some potential brides) believe, against all odds, he should get settled with.  Ravi’s hilarious caricaturized typing gesture symbolizes the absurdity of communicating with someone based on the simplified information appearing in one’s “Bio Data.”  Aside from caste, scoring the highest points are one’s occupation and education.  Mother teases son that having a Masters makes up for being “average looking” and not making the kind of money a doctor does.  But Ravi persists in saying that this whole system all seems so redundant today now that social media allows us to connect with thousands of people anytime we want, learning a lot more about their likes, interests, and personality than any Bio Data could ever reveal.

In the end both mother and son have won.  We learn that Ravi has since got married, in fact, but to a wife of his own choosing.  I am thrilled to have finally seen this piece in its latest reincarnation at the Tarragon’s Extra Space.  It is not difficult to see in the least why it kept on coming back by popular demand.  Can’t wait to see what Why Not whips up next.  Of course, it’s only made to look that easy.