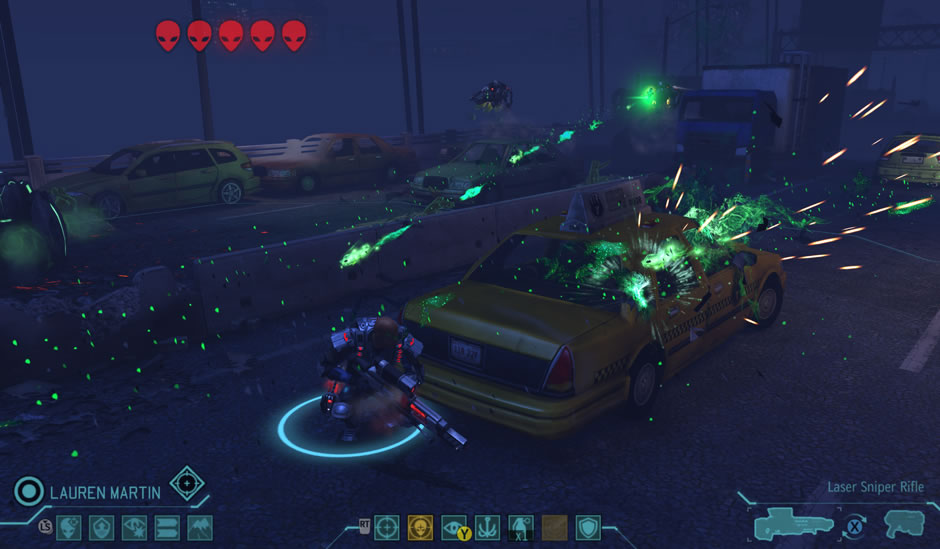 I have a confession to make:  I killed Neil Gaiman.  Well, technically a robot killed Neil Gaiman with a giant laser but I still feel largely responsible.  The whole affair has me really shaken up.  I mean, it wasn’t just Colonel Gaiman; I lost Captain Pratchett, Lieutenant McMaster-Bujold, and my top Marksman, HP Lovecraft.  They had all served me so well throughout the good times and the hard that to see them all eat alien death really shook me up.  I…I don’t know if Earth can survive without them.

Let me back up a bit.  During the big Steam sale over Black Friday, I allowed myself to get suckered into buying the newest iteration of the XCOM series by Firaxis (current purveyors of the Civilization games aka Crack for Leeman) and generally heralded as a return to form for a much ballyhooed game franchise with a somewhat storied history.

Old school XCOM was one of those games that if you told a fan you hadn’t played it, you’d watch something click in their brain and their eyes dilate as they’d sit you down and explain for the next three hours how it was the greatest game of all time and how this one time so and and so forth.  Starting as some of the best things do, XCOM got its start on DOS in 1994 as a small unit tactical strategy game with something of a global resource/research management game alongside it and the newest version does a wonderful job building off that premise after a few false starts in recent years.

In the game, you bounce between two and a half different modes.  The outer frame of the game is maintaining a defense network to keep the evil aliens from enslaving/destroying mankind by launching satellites to watch out for their evil-doings, building weapons and gear to shoot them in their bug-eyed faces, or dissecting/interrogating specimens “located” in the field.  This is where what counts as a story takes place and you try to balance your limited resources to prioritize what needs doing to save humanity.

You’re provided funds by all the nations who have yet to descend into civil unrest due to alien-inspired panic and the better you do, the more moolah they send your way.  Ignore all the cattle mutilations and abductions in Australia and they stop writing your checks.  This can be incredibly stressful as you try to predict just where the aliens will strike next and try to be prepared for them in the most cost-effective manner.  It’s also where you can do a ton of customizing as you build your base room by room, deciding if you need more lab space, power generators, or that expensive but tempting psychic testing facility.  You have just enough money to do some cool things but not enough to do everything.  Of course, you could always sell those alien corpses on the open market for some spare change…I’m sure there would be no ramifications whatsoever for that.

The actual Play portion of the games take place in the field where your squad that you’ve developed are sent out to hunt down aliens, rescue everyday schlubs or high profile targets, or raid downed UFOs for priceless alien tech.  The gameplay is a lot of fun and incredibly tense as you try to slowly make your way towards the enemy, learning very quickly the importance of things like cover and sight lines.  The camera control can get a little wonky and make a wrong click and it could very easily be game over.  Still, the ambiance is really well thought out and the game does a great job of rewarding patience and forethought and of punishing arrogance.

I mentioned that there were two and half modes of gameplay; the half is the aerial combat portion which serves as more of an obligatory nuisance than as a real contribution to the game.  The actual dogfights play like a tacked on mini-game and I spent most of the game having completely forgotten about it until aliens would rain hot death and I’d go, “Oh right, I should probably get some fighter jets or something.  Whatever.”

Building up your squad is possibly the most rewarding part of the game as you not only decide on what weapons, gear and skills they have but also can change their hair, face, race and (Most importantly) pick their names so you can have a party made up of American Presidents, your ex-girlfriends, or in some circumstances, various fantasy authors on the bookshelf next to where you play the game.  If you play in Ironman mode where you can’t load previous saves, this makes their deaths all the more tragic and permanent which brings us back to how I killed Neil “The Sandman” Gaiman.

I could have played it safe but I thought they could handle the giant robot with its death cannon.  They had been going through the rest of the mission like a hot plasma sword through butter.  I was wrong and I got cocky and now there’s no bringing them back.

Playing this way is brutal and possibly even game-breakingly so but it really does give a sense of high stakes and lends real import to all the decisions you make in the game, something that most games with their quick save/quick load or do-over from the start of the level don’t.

I recommend this game for anyone who enjoyed Syndicate, Fallout Tactics, even the Baldur’s Gate/Neverwinter Night games.  You get a real sense of your team and feel the impact of every decision you make in a way that, while painful from time to time, is ultimately very rewarding.