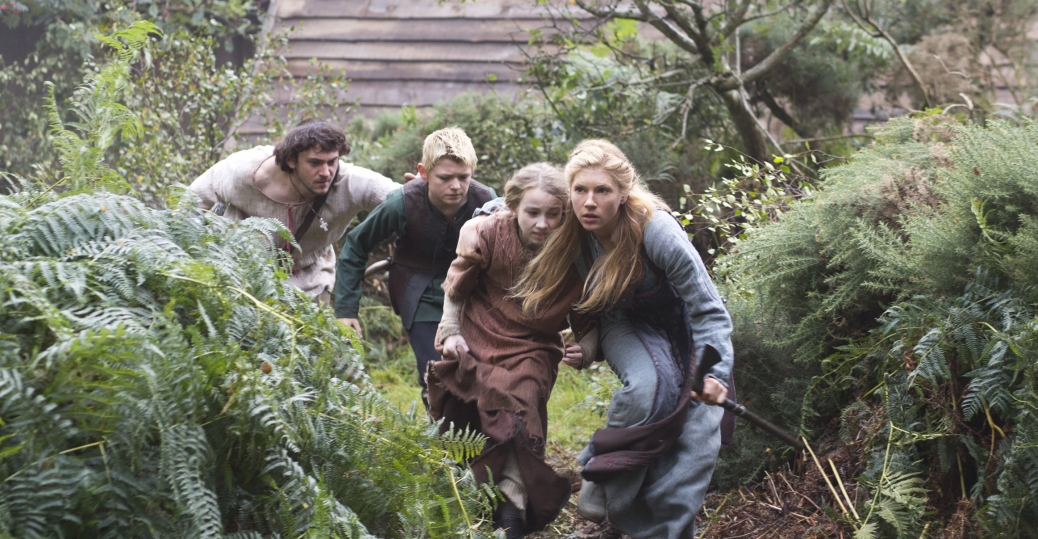 If you’re not watching History Channel’s Vikings, which concluded its first season on Sunday with a tense finale, you’re missing out. This is easy to remedy, because there are only nine episodes to catch up on before Season 2 premiers next year. (I don’t know which is worse: that there were only nine episodes, or that we have to wait until next year to get more). When I first heard History Channel was going to be doing a scripted drama, I had no idea what to expect quality-wise, because this is new territory for the channel.  But Vikings was well-written, well-acted and was visually gorgeous to boot.

Every episode is filled with beautiful views of ‘Scandinavian’ scenery (most of the series was filmed in Ireland). There are a lot of thoughtful and artistic shots. And surprisingly, the gore on the show is not excessive, and instead filmed with carefully thought out sequences. Episode Eight, ‘Sacrifice’ was the perfect example of this. If you’re squeamish, it might be difficult to imagine sitting through an episode centered on sacrifices, including human ones. However when they actually got around to the sacrificial ceremony, it was done with a series of close-ups and reaction shots that when combined with the music choice, created a beautifully haunting scene.

‘Sacrifice’ was also a great example of how well Vikings varies it pace. It will have a more character-driven, culturally focused episode like ‘Sacrifice’, but it will also feature episodes focused on raids or fights to the death. The fight scenes don’t seem repetitive thanks to the choreography, and also the variety of locations. Another bonus is that there are shield-maidens fighting right alongside the men, and it’s awesome.

The only shield maiden who gets any screen time outside of battle scenes is Lagertha. It would nice to see more of the women warriors developed, but Lagertha is such a great character, I’m not going to complain. Yes, she is a shield maiden, but she is also a loyal wife (to the main character, Ragnar), a loving mother, and a protector of women in general. She’s intelligent and she’s merciful. But if you cross her or her family, she will in all likelihood destroy you.

Let’s talk about Lagertha’s family, because it’s strange. She has two young children, Gyda and Bjorn. Bjorn seriously has more sense than the adults 99% of the time. Lagertha’s husband Ragnar is ambitious and charismatic. He’s a fascinating lead character, even if his decisions in the past few episodes have depleted some of his likability.  Ragnar’s scheming brother Rollo has flip-flopped on the likability scale. He constantly undermines Ragnar, but just as soon he seems to be beyond redemption, he does something surprisingly noble or provides unexpected comedic relief. (If you don’t think watching a large, angry and confused Viking get baptized is hilarious, I’m sorry, but you’re wrong.)

Rounding out this dysfunctional family is Athelstan, a Christian monk Ragnar saved/kidnapped on one of his raids and is now the family slave. Athelstan helps the audience ease into the Viking world as he acclimates to his new surroundings. The relationships he forms with his new family are interesting to watch unfold. One episode Ragnar and Lagertha asking him to join him in a threesome and in another they’re planning to offer him as a sacrifice to their gods. It’s complicated, to say the least. Even more complicated is Athelstan’s evolution as a character. He’s a survivor but he is deeply religious, which is a problem in his new pagan environment. Athelstan has to perform a delicate dance to find middle ground between his faith and his desire to not only live, but live as a free man. One of the things I’m most excited for next season is to see where they take Athelstan’s story.

It’s going to be a long wait. I was on the edge of my seat for most of the finale, and when I happened to glance at the clock and see there were only two minutes left, I realized they were going to leave a lot of questions unanswered for the time being. The promos did not lie; I did not see the ending coming. Well, except for Rollo’s not-so-sudden but inevitable betrayal. But the unexpected drama came from a sickness that attacked the town. I didn’t realize I had to worry about plagues on this show.  Violent deaths -be it getting shot by an arrow, or getting stabbed, or yes, even human sacrifice- those were anticipated. But weird medieval sicknesses? Well played, Vikings. Well played.

And that’s where the season ended. There are a lot of uncertainties. The fates of some characters after the illness (Siggy, did you die? I was just starting to like you! I think you’re okay, but I’m not sure) are up in the air. As is Ragnar and Lagertha’s relationship, and the future of Ragnar’s position of power. With all these cliffhangers, I felt a sudden urge to storm the History Channel offices and wreck some Viking styled havoc. But I really, really want the next season, so that seems ill-advised. The only thing I can really do is urge you, if you haven’t already, check out this show. Then join me in the long wait for Season 2.