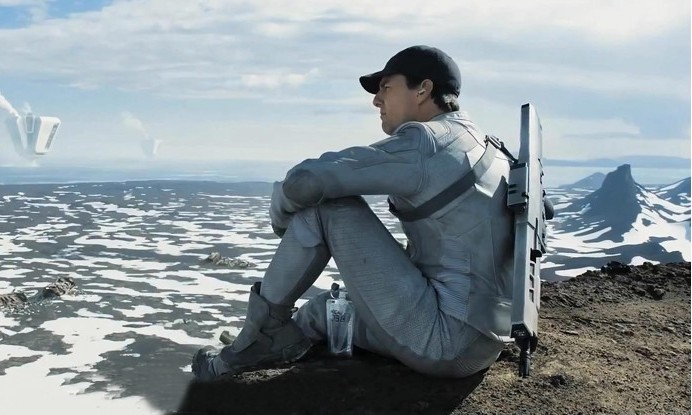 Happy Summer Movie Season Everyone! And no – you’re not imagining it. It really does get earlier every year. I blame global warming.

And so we come upon our inaugural summer movie: Oblivion. It has everything that makes a summer movie great: bankable star with charisma to spare (Tom Cruise), outlandish and effects-laden premise (dystopic future, cool space cars), and ubiquitous, intriguing trailer that depreciates the more you watch it.

It is, unfortunately, kind of a dud. The idea is cool enough, and there are bits of sci-fi thought pieces sprinkled throughout, but the whole does not come together into the fully formed movie it could have been. Basically, the premise is this: Tom Cruise plays Jack, one of very few human beings left on Earth after a bitter war with “the scavengers” that left much of the Earth a radiation-filled mess and ended with most of humanity being brought up into space to recolonize one of Saturn’s moons. Jack, along with sexy, British red head Victoria, spends his days as a part of the “mop up crew,” fixing the drones designed to protect the giant Hydrogen fusion machines that are transforming Earth’s ample oceans into fuel for the floating spaceship in the air from the remaining “scavs” trying to plunder them for parts. There’s a bunch of twists that I won’t spoil until later, but if you watched that trailer, and saw Morgan Freeman’s cigar-lit face, you know there’s more to this story.

I applaud Oblivion for its attempts at narrative sophistication, and a lot of these twists COULD HAVE seemed cool, in defter hands. But the movie has an inherent emptiness at its core that forces it to fold in under the weight of its own narrative trickery. (SPOILER ALERT) When the big reveal finally comes, and we find out that not only are the “scavs” human but Jack is one of millions of copies of the original astronaut who discovered the scary spaceship threatening humanity in the sky, it could be amazing. It could be a meditation on what it means to be human. It could just be cool. Instead, it just brings up a rather glaring plot hole. Namely, if big box-o-destruction in the sky has the capacity to make drones that LITERALLY kill 100s of humans before the humans can get off one successful shot, why does it need thousands of Tom Cruises jumping all over the planet? What possible purpose does that serve? I can try and force an explanation in there, but I’m doing WAY too much of the movie’s work for it.

There’s also a love story that involves Cruise’s wife that also falls short of expectations due to the vastly superior charisma of British redheads over ambiguously accented super models. And an ending that boggles the emotional and metaphysical imagination.

The visuals are occasionally awesome, occasionally laugh-worthy (there’s one particular moment where a drone sneaks into someone’s bedroom covered in a curtain that elicited loud laughs from me and my viewing companions), but they are the perfect example of the film’s emptiness. With rare exceptions, there’s no unifying purpose to the cool or artsy moments.

I actually sound way more down on the movie than I am. I truly enjoyed watching it, especially because Tom Cruise is the world’s foremost action star for a damn reason. Whether “Tom Cruise running” all over the alien landscape, or having underwater sex, or trying to piece together his own humanity,  Cruise proves once again that whatever one might think about his personal life, he is a presence on screen. But this presence, like the movie’s obviously high-budget visuals and plot twists, remains surface level, leaving us with a movie that doesn’t fully satiate my need for awesome summer spectacle.