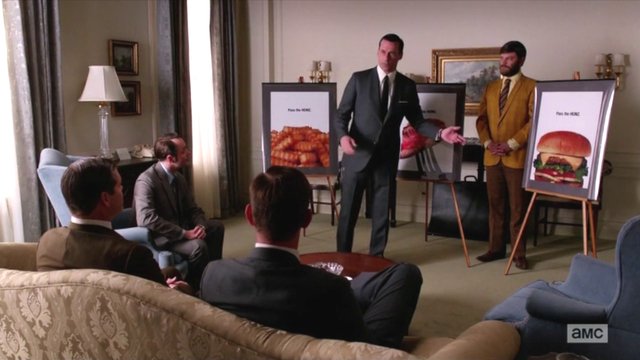 “It sounds like New Year’s Eve when they empty out the garbage, there’s so many bottles.”

For everyone who complains that nothing ever actually happens on Mad Men, this was the episode for you. The structure of the episode perfectly balanced moving the plot forward and having interesting character moments. The episode opens with Don’s secretary Dawn (don’t worry they make plenty of jokes about the name on the show) meeting up with a friend and discussing how stressful her job is. Through Dawn we get another look at the evolving attitudes towards race and gender happening at the time. I really like when the show takes a step back from the central characters that we know so well and gives us a bigger glimpse of the 1960’s world where Mad Men is set.

Soon enough we are back with the main characters, and we follow Don into a mysterious locked room at the office, complete with tin foil blocking the windows. They are working on pitch for Heinz Ketchup, and no one can know about it. Don wants to the job badly but, like always, is distracted by the women in his life. His wife Megan has to shoot a love scene on the soap opera she stars in, and Don is not pleased.

This is the first episode where Joan plays a large role, after laying low and adjusting to her new position as a partner at the start of the season. An old friend comes to town to visit her, and they head out for a wild night in the city. Joan confesses to her friend in the morning that she doesn’t know why she acted so impulsively, but what comes across is that she needs a relief from the stress of her new position. It’s not she can’t handle the responsibilities, far from it, but it’s the fact that the other partners still look at her like glorified secretary which causes her to act in strict and dour way in an attempt to be taken seriously.

Eventually, Don leads the team in their pitch to Heinz Ketchup. Don challenges their expectations, arguing that the audience will use their imagination and this will enhance their desire for the product. Outside the room, Don and the gang meet Peggy and the group from her new agency. It’s a rare chance to see Don caught truly off card. Once inside the room with Heinz, Peggy goes into full Draper mode when making the pitch, even quoting his famous line about changing the conversation if you don’t like what people are saying. What Peggy doesn’t know is that Don stayed behind and listened to the pitch from outside the door. Don seems to both annoyed by Peggy’s actions and also begrudgingly respects her. In the end, neither agency gets the account, but it’s clear that any lingering friendship between Peggy and her old colleagues has been greatly damaged.

Don goes to the set of Megan’s soap opera and watches her film her love scene. This of course leads to a big fight between them, and Don almost calls her a prostitute. Don calling someone out regarding marital fidelity is clearly the most hypocritical thing ever, but as the show has established Don is clearly a do-as-I-say-not-as-I-do kind of guy. This point is further cemented when Don then immediately rendezvous with Sylvia, his mistress, and falls into bed with her in a way that perfectly mimics the love scene that Megan was filming.

Closed doors were a recurring theme in this episode. There’s the locked door to the office where they worked on the Heinz pitch, there was the door outside the meeting room where Don eavesdropped on Peggy, and there was the closed door to the partners meeting that sets off Harry Crane on a poorly timed rant.

Harry Crane is like the Mad Men version of Jerry from Parks and Recreation. Nobody seems to like him very much, they always dump on him, and he just quietly takes it in stride. Judging from what others write regarding the show, it feels like many people in real life dislike Harry and I am at a loss to explain why. People seem to think his character has become smarmy but who are they comparing him to? When put next to all the other main characters, Harry is almost a saint.

He started as very minor character, a friend of Pete who would laugh at his crude jokes and follow it up with an awkward comment. Over time though, his character evolved. He got assigned to the media and TV department, the Siberia of the old Sterling Cooper, complete with an office built around an enormous concrete pole. But he worked hard and lucked into the explosion of television advertising that happened in the 1960’s. Harry capitalized on the booming popularity of the medium, and built the TV department almost singlehandedly into the only consistent money making department in the whole company. When the partners form the new Sterling Cooper Draper Pryce, they knew they had to bring Harry, and his constant revenue stream, with them. This is where Harry made a big mistake. Instead of negotiating for a full, or at least a junior, partnership he settled for a big office, and salary increase (but still nothing compared to what the partners made), and a new title as “Head of Media”.

Harry is kind of a push over. He is non-confrontational and doesn’t talk himself up, which sets him apart from the loudmouths like Roger and Pete, and he doesn’t manipulate people the way Don does on a regular basis. He is not perfect, he is sometimes sexist and misogynistic, and has cheated on his wife on at least two occasions, but this is nothing socking compared to the behaviour of all the men at Sterling Cooper Draper Pryce.

In this episode we finally see Harry stand up for himself and demand to be taken seriously at the firm. He wants a partnership, in addition to monetary compensation for all the years of work he has put in. Yes he overacted to Joan’s firing of his secretary, yes his remarks about Joan were rude and unnecessary, but he was still right to assert his importance to the company, he just picked a bad time to do it. He has felt underappreciated and pushed around for years, so he finally reaches his limit and causes a scene in the partners meaning. And for this he seems to have earned the complete resentment of Roger and Burt. But Harry has built success in a media world they can’t even grasp. They have no concept of how television works, so Hurry’s job appears easy to them. This is just because they are incapable of understanding all the work Harry does and the medium in which he does it in.