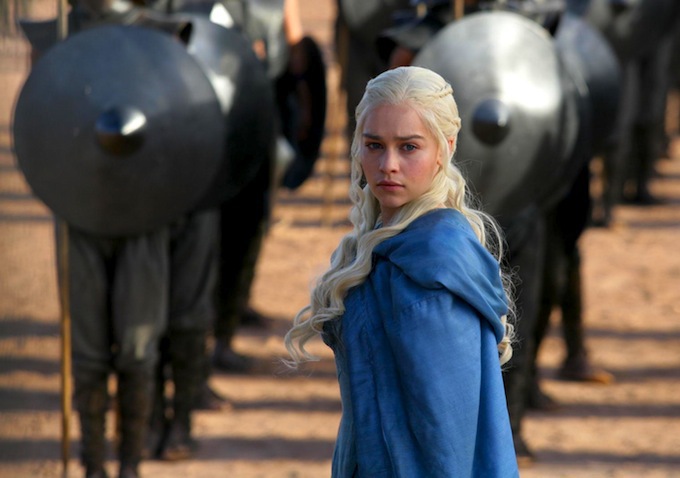 Twenty hours into this epic, with enough corpses and orgies to make Achilles blush, we, as an audience, seem to still be closer to the beginning than the end. Seasons are moving along like a blind tortoise as characters are still separated by oceans and ego. While this may seem unappealing, it is in fact a blessing. The original story by George R. R. Martin is being reconstructed slowly but efficiently by the deep pockets of HBO’s David Benioff and D. B. Weiss. Rather than make another book-to-film disappointment, the creators are following Martin’s stories step-by-step much like the Coen Brothers did with the Oscar-winning No Country for Old Men.

In the Game of Thrones, there is no time for rest and doubt will take your life. Each character must work their way through the maze of obstacles and complications where every step could be their last, much like walking a cliff’s edge at midnight. With skill and patience, the wise know that each step is vital to move forward or sink backwards. Successful characters include Tyrion, who uses his small stature along with his large mind to defend the city in season two. Robb Stark crept into the woods to avoid the Lannisters and managed to find a wife.

“Valar Dohaeris, the season three premiere, continued the roller coaster that began with “Blackwater,” where a green fire exploded amidst battle ships and set off another series of story arcs and plot points. The characters still seem be spread out like middle-schoolers at a first dance but each develops and hardens with every episode. Benioff and Weiss continue to enhance the show with vibrant dialogue to create some kind of hybrid beast of familiar, yet unexpected. Since the pilot episode began with a White Walker (ice zombie) and the second season finale ended with a multitude of White Walkers, that portion of the story was wrapped up in a nice package and left to marinate. This first episode of season three did a great job of reintroducing fans to familiar characters while explaining characters to new watchers. Essentially, the Seven Kingdoms are still as cold and unforgiving as those who call it home.

Daenerys Targaryen, played by the electric Emilia Clarke, has moved up the social ladder of badassness, from being a pampered princess to a nomad Queen—leader of dragons and warriors. Despite that she consistently crushes obstacles and munches on horse hearts, Ser Jorah (Iain Glen) continues to test her strengths and challenge her initial thoughts in every scenario. Without giving away too many specific details to the story, let’s just say someone’s nipple gets cut off in a test of strength. But, as if a rule, the Game tends to favor those who adapt even when it emotionally cuts engraved beliefs.

Samwell Tarly (John Bradley) and the Rangers are continuing to outrun the White Walkers and warn the civilians while Jon Snow (Kit Harington) continues to move further out into the relentless world of ice. While he claims to be studying other tribes for battle tactics, it’s difficult to determine his true reason for his shifting actions. Perhaps one of the most notable ingredients in the recipe for the Game is how the audience is invited to follow a single perspective to reach a take-it-or-leave-it viewpoint, before shifting to an entirely new perspective where we watch two new characters battle wits or swords. For Jon Snow, he decides to join up the etiquette-free King Beyond the Wall, which seems more appealing that the strict, sausage party group, known as the Night’s Watch.

A general favorite and top pick for most interesting character continues to be Tyrion Lannister, played by Peter Dinklage. Audiences fell in love with the dwarf who spent the first two seasons with a goblet in his hand and whore in his chambers. After a battle in the second season left the man with a horrendous scar across his face, the thoughts that brought smirks to the surface seem to have dissolved into his soul. While his banter remains brilliant, the verbal jabs are now received rather than given. In what I believe to be the most vivid scene in the episode, Tywin Lannister (Charles Dance), which is Tyrion’s father, silences his son with harsh, piercing taunts. “You are an ill-made, spiteful little creature full of envy, lust and low cunning,” shouts Tywin at Tyrion’s request for an early inheritance of land, which should be a reward for his bravery from the battle in season two. “Neither gods nor men will compel me to turn Casterly Rock into your whorehouse.”

In the Game, hazards come in every direction and usually the intent is murder. In a minor scene, a homeless girl tosses a wooden ball to one of our leads, which opens to reveal a poisonous, scorpion-like bug. Moving like a ghost, the girl is apparently some sort of vengeful warlock who quickly disappears, but that’s the Game. Intriguing and complicated, only the toughest competitors even have a chance of survival. Danger comes in every direction, but you can watch safely from your couch next Sunday night on HBO. Winter is here.