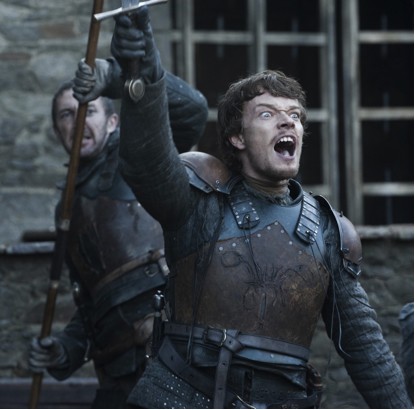 Season Wrap Up: Game of Thrones

After last week’s (sadly unreviewed by me) action battle awesomefest, I spent most of this week’s Game of Thrones wanting to hug the characters. Maybe that’s not the right reaction to have to characters so completely embroiled in the Game of Thrones, but tell me you didn’t get a bit teary eyed watching Tyrion come to the disheartening revelation that he was now too addicted to the game to ever really achieve happiness?

Most of my pity and hugging-desire, though, went to Theon, who this week had a scene that was like a master class in what makes Game of Thrones different than most fantasy epics. First, you have the character of Theon in general. He’s a little shit, complete with a rat face and tendency to act like a jerk to women. He even burned two CHILDREN alive just to save face. He betrayed the only family he’d ever really had. And yet, the show (and the book before it, although I think the show does a better job at this, probably with the benefit of hindsight) makes him a fully realized character. In fact, with notable exceptions, most of the baddies on Game of Thrones are fully realized.

This weekend, I saw Snow White & the Huntsman. I haven’t decided yet if I really want to review it (honestly, it pissed me off a lot and left me actually missing Mirror, Mirror, which is saying something), but it reminded me of exactly why I love Game of Thrones. In Snow White, they set up this awesome queen character (played with typically beautiful intensity by Charlize Theron) in the first few minutes of the script, with a complicated relationship to the men who rule all around her and a deeply aggrieved sense of how unfair this universe is. Then, the movie drops it in favor of a lot of other crap. This preciously crafted early character turns out to just be window dressing around a typical baddie.

No one is typical in Game of Thrones, and nothing is simple.  Theon has done awful, seemingly unpardonable things, but it is still heartbreaking to watch him lose everything. Having read the book, I can safely attest to the fact that I had no such mushy gushy feelings about book two Theon Greyjoy. But as portrayed by Alfie Allen, and wonderfully brought to our television screen, I think Theon is the most pitiable character around. That’s a feat of television brilliance.

On top of that, the scene in question features Theon giving a rousing, St. Crispin’s Day style speech to his troops. Winterfell is surrounded, and there’s no way that they are all going to make it out of this alive. As far as the Stark men outside the castle are concerned, these are the murdering thieves who killed the Stark heirs, and they are all going to die. But Theon, in a brief moment of heroic clarity, wants to go out living by the Iron Island credo, finally able to be his father’s son now that he’s lost all hope. And his speech feels appropriately heroic, in a tragic sort of way, and we slowly watch as the men around him begin to see Theon in a new light. Until, of course, his main advisor whacks him over the head, and the whole crew decides to sneak out of Winterfell, because the whole endeavor meant less than nothing to them to begin with. That set up of expectations, plus punishing crash to reality could serve as a thesis statement for this series.

There’s a lot more to love about the last two episodes of Game of Thrones second season. The battle at the Blackwater was heart stopping awesome, cleverly grounded in fantastic Lena Headey drunken babble and the surprisingly nuanced portrayal of Sansa Stark. The final episode carefully, brilliantly pushed the characters into position for next season, including a heartbreaking/terrifying Sansa moment. I have a few quibbles, most of them book based. I could have used more Arya kicking ass (and I think the show has a lot of ground to cover on her storyline, given how much it has deviated from the books). At first, the scene in the House of the Undying felt like a cop out (for those who didn’t read the books, the equal scene in there was way more of an acid trip, and full of loaded, important imagery) but the more I’ve thought on Danaerys’s big scene, the more I like it. It speaks to what has made this adaptation so successful – it foregrounds Danaerys’ emotional journey (namely, giving up her love and hope of an actual child for a chance at being a leader and therefore mother to her people) at the expense of plot details, yet still keeps a lot of cool visual moments that we can argue the significance of until next season comes along.

Consistently throughout this season, the team behind Game of Thrones has understood the emotional journey of its characters, and that is what has improved Season Two so greatly from Season One (which I’ve only recently caught up on). Take, for example, Robb Stark. In “A Clash of Kings”, he is barely a presence. His decision to throw off his marriage to Walder Frey’s daughter in favor of marrying a girl he loved is played as teenage idiocy, and tossed aside despite its cosmic significance. For better or for worse, the show is interested in getting us to understand Robb, Talisa, and how inevitable this decision was. The Robb romance is not my favorite part of Season Two by far (mainly because I think the two actors look out-of-place gorgeous all the time), but I think it speaks to what makes the show so good that they invested so much time to it.

This slow, ponderous, and occasionally hilarious finale speaks to that dedication, and speaks to the immense potential this series has going forward. Now if only I could skip the next ten months.