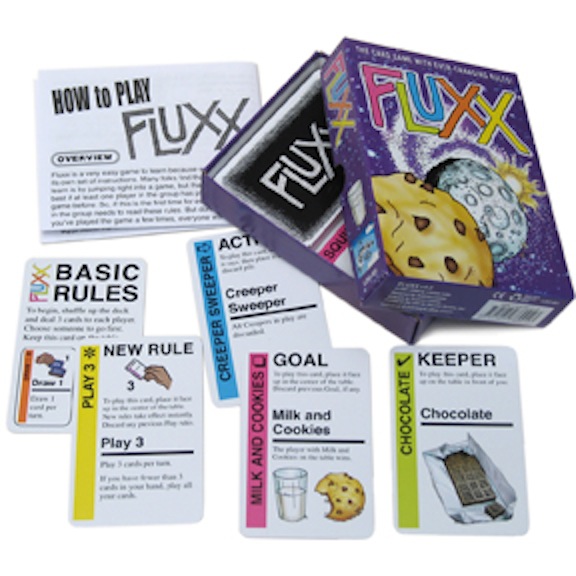 Since Bill Watterson coined the term “Calvinball” it has acted as a remarkable reference point for chaotic games where the rules constantly change and the players are kept on their toes.  I have played a handful of games where planning was impossible and flexibility was the key to victory although the victory itself seemed so arbitrary that really it is the process of playing that provides any real reward.  The Fluxx games are, so far, a decent example of this kind of game.

In Fluxx, there are two sets of rules.  The main rules of the game as printed in the booklet that don’t change.  These include how to set up the game and what the various card types do.  The other set of rules are printed on cards and laid out in front of the players and these are the rules that change as game progresses.  They determine how many cards you draw, how many you can play, whether there is a hand limit, special conditions that let you do funky things, etc.

As you play, the means of victory constantly change.  Fluxx provides players with Goals, Keepers, and Creepers.  Goals tend to be fairly straightforward and require that a player possess a certain type of Keeper card and Creepers generally prevent one from winning although this game is all about making exceptions and flummoxing expectations so even that is not an ironclad rule.

How Fluxx really makes its hay is in the multitude of game variants.  You can play Zombie Fluxx, Oz Fluxx, Space Fluxx, etc, and all the games not only have different amusing pictures and unique card names but the rules within the game change subtly to reflect the different genres.  I own both Monty Python and Cthulhu Fluxx and while the core game play is the same, these are vastly different experiences.

Monty Python rewards singing loudly and speaking in outrageous accents while Cthulhu provides a constant feeling of comic dread by introducing Ungoals and Doom points whereby everyone loses (unless you’re a cultist…and even then.)  It is that flexibility that I think really sells this game for me.  As I play games like this, despite all the wackiness, I feel a dread that it’s always going to play out roughly the same but so far I’ve been pretty pleased.  Victory is somewhat shallow due to the chaos but rewarding nonetheless and the games tend to play quickly enough that you can play several games and spread the victory cheer around.

The game is incredibly casual and beyond trying to hammer out the details in the Main Unchangeable rules (Keepers and Creepers are a little idiosyncratic at first) it is fairly simple to pick up.  Like Munchkin, you can pick a genre that appeals and run with it but do take a look and see if there are rules differences or if it’s just aesthetic changes.  I heartily recommend it.