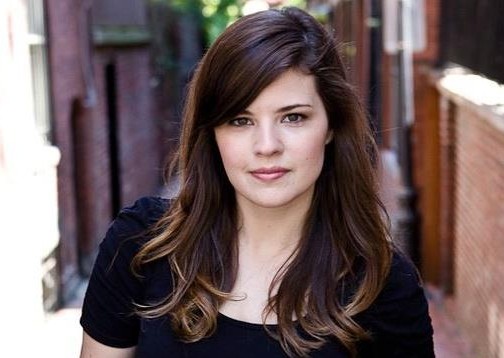 One of Boston’s most promising young performers Caitlyn Conley’s standout turns in both Wandaleria and True Believers landed her on My Theatre’s must-watch list.

Caitlyn’s a Best Actress in a Regional Production nominee in this year’s My Theatre Awards and she took the time to join our interview series.

Let’s start by you introducing yourself to the readers. Tell us about your path to Boston and theatre.
Hi, I’m Caitlyn Conley. I was lucky enough to grow up in Stoneham, MA where we not only had a great school drama department but also a local professional theatre. For a kid who had a passion for acting and parents who had no idea what to do with that, Stoneham had plenty of opportunities to get involved.

How did your childhood encourage you to pursue theater?
My mom bought me an Annie VHS when I was a kid and I must have played it a million times. When I first started doing theatre I think my only goal was just to play Annie or Wendy in Peter Pan, until I realized I couldn’t sing.

Do you have any entertainment (film, theatre, music) idols or mentors?
I’m constantly amazed by Laura Linney and Emma Thomson. They are always so amazing at playing strong female characters. I’ve always admired their ability to make their characters real people instead of exaggerations of larger than life strong women.

Do you have any favorite roles you’ve played?
I have to say that KT Watts [in True Believers] is up there, but I also really loved playing Molly in Farragut North with Zeitgeist Stage. Both girls really take charge and don’t really take crap from anyone but are also still really vulnerable. Finding the balance between those two things is really fun.

I know some actors have die-hard habits, verging on neuroses before shows. Do you do anything before every performance?
I’m known for all out silliness before shows. I get a little stir crazy and have been seen dancing around and being giggly. It is probably the result of my other die hard habit before shows, drinking Red Bull.

Can you describe your character in True Believers?
When I had my first rehearsal for True Believers, Thom Dunn [the playwright] described KT Watts to me as a “manic pixie dream girl, who can exist in real life.” I don’t think I’ve ever come up with a better description than that. She is just badass but sexy at the same time because she doesn’t try so hard to be. She does her thing and is really frigin talented at doing it. KT is funny without working hard to be, she’s sassy, geeky and fun all at the same time and very naturally.

Was there anything that drew you to perform this role?
When I first read at auditions they had me read for Box. Yup. The socially awkward wanna- be wizard who plays MMORPGS in his mothers basement? That one. It was a scene where Box approaches the main character (and his hero), Chad, in a bathroom. I read it as if they were seriously going to cast me as Box, which I assumed they wouldn’t have me cross dressing. So I just went all out and acted like I was a stalker fan girl who had followed Chad into the bathroom and was trying to be sexy. After that, they sent me home and I didn’t read for KT until callbacks. By the time I read for her, I knew that the show was going to be a blast to work on and I would have taken any role they gave me. I just lucked out with KT.

I actually wasn’t sure that I was going to get the role, I didn’t think I fit it that well. I thought I was too young and didn’t totally fit the bill as a comic book geek, which made me want it more. I was so excited to play a role I had never played before.

Did you find any differences working on a role in an original play?
After never having worked on a new play before Wandaleria, I really enjoyed the experience working on both. There is something awesome about being able to talk to the person who created your character whenever you want. They have so much knowledge of back stories and things they didn’t even include in the play. Thom was great because he had planned out everything, right down to the entire story of one of KT’s graphic novels that she mentions only once or twice in the show.

Did you work with the playwright at all in finding your character?
I did, more or less it was Thom clarifying jokes for me in the script because I didn’t know who Gambit was, or why I was wearing a refrigerator box.

Do you have a particular genre of theatre (or film) to which you’re drawn?
Not totally. I’ve actually only done comedy once or twice before doing Wandaleria and True Believers. Since then, I’ve gone back to doing more dramatic roles and I really miss comedy.

Is there anything in your life so far that prepared or prepares you to perform as an actress?
Everything in my life prepares me to perform. One of the best aspects of performing is taking things that are happening to you in your life and putting them on stage. It sounds cliché but it is my favorite part. There is something really therapeutic about being publicly vulnerable. As an actor you are given this incredible gift to say things that you may have always wanted to say or feel while bringing someone else’s pain or joy to life.

Who is easier to act with on-stage, male or female actors?
I have had really amazing experiences with both! I guess I would go with male actors though, I really like working off of that contrast in experiences. In True Believers, in particular, it was awesome to work with male actors because comic books are such a male dominated medium, and I got to play the girl who was really well respected as an artist in that medium by those men.

What’s next for you in the theatre world?
I’m actually currently living in Washington DC and auditioning. I really miss Boston, though, and all the friends and connections I made while being a part of that community. There are so many amazing projects going on there right now that I wish I could be a part of. But DC has a lot to offer and I’m enjoying exploring that.

What is the biggest lesson you learned from working on True Believers?
Don’t take yourself or your art too seriously. It doesn’t have to be so stressful and if you let go of all of that, you’ll most likely get a better performance and a better product all together. In my last interview I did for True Believers I said that working with Vagabond was like being drunk at 3am and making a play with a bunch of your friends your college dorm. I’ve never had that much fun working on a show and I’ve never been more proud of one.

Tell us a joke.
What’s the difference between Batman and a robber?
Batman can go into a store without robin’!!

Have you ever been to a Comic Con?
No I haven’t! I would love to go to one. Though, I’ve heard there is something off about the smell…

Share something with our readers that you think they should know when deciding whether to vote for you.*
I recently found out that Justin Bieber and I have the same tattoo.

*have your say in who wins this year’s My Theatre Awards by emailing, facebooking, tweeting or posting your comments on the nomination announcement.