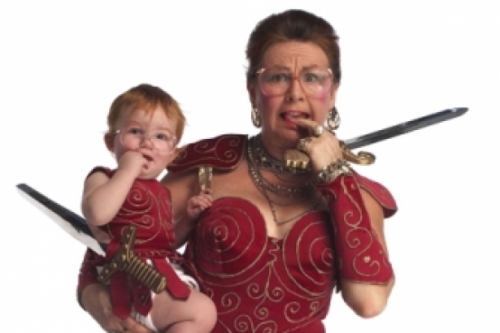 I have no idea what is going on at the Panasonic right now. It’s a bafflingly weird 90s-era one-woman comedy show, I guess. But, like, Super Canadian without any of the kind-clean-generous-welcoming-diverse-unassuming-forward thinking traits that make us awesome.

Mary Walsh is one of those people- and there are startling number of them- whom I’m told is a “big deal”, at least in Canadian terms (usually because the Globe & Mail or CBC said so) yet I have never heard of her before in my life. I know she was on that show I never watched- This Hour Has 22 Minutes– and I know she once tormented Rob Ford and it became a big deal (but everything about Rob Ford becomes a big deal in the artistic community. They Do Not Like Rob Ford!!!!!!!! Was that enough exclamation marks? If it wasn’t, I’m sure the next piece of Toronto-based art you see that has any space for political opinion at all will reiterate for me). The posters for this show told me that this Mary Walsh person I’d never heard of was “dancing with rage”, but I don’t know what that means. Having now seen the show, I still don’t know what that means. The poster also features an ageing lady dressed as a warrior princess of some kind. Again, I did actually see the show, yet I couldn’t tell you what the getup was about. 90% of Walsh’s jokes inspired one of three reactions from me: a stony-faced stare, an eye roll, or an audible groan. The other 10% went soaring over my head not because they were clever but because they referenced some intense Canadiana I’m not intune with despite being, you know, a Canadian living in Canada. I felt about 40 years too young to find a single moment of it funny. There are dated and unfair Harper jokes, Tim Hortons gags, and a host of goofy accents heavy on the “oot” and “eh”s. This is Can-con gone awry, overboard, and just generally wrong.

I appreciate a dedication to Canadian content, but Dancing With Rage is so terrible that to put it in the same series with the rest of the impressive Off-Mirvish season is absurd, no matter what country it comes from. The comedy is overwhelmingly dated both in topic and style- relying on wacky characters and political meanness (not to mention generations-old punchlines like Garth Drabinsky). In the early 90s when Walsh created her signature character Marg Delahunty and her odd Xena-like alterego (thank you, Wikipedia! I had to figure out what was happening somehow), wacky characters and political meanness were a lot more cutting edge. So was Xena: Warrior Princess, by the way- a reference now so old that I remember it solely as “that show my cool aunt really liked when I was a kid” and “the character once played by Ron Swanson’s girlfriend”. Comedian after comedian has dramatically changed this particular game in the last 20 years to the point where merely bringing comedy into the political realm doesn’t cut it anymore. Your character has to have an identity within that world that makes sense. You have to say something about the political and/or cultural moment you’re infringing upon that hasn’t already been said by another comedian or a townie with twitter (Rogers jokes? Really?!). You have to remember that most of the Canadian audience (in fact, almost All of the Young Canadian audience) are surrounded at all times by American content. That means that being “groundbreaking” in Canadian political satire isn’t enough (not that I would call Marg Delahunty sharp enough to be deemed “satire”), you have to be smart and funny and fresh on a global scale. This is a post-Colbert comedy world; this Marg lady just looks like an idiot (and not in a good way).

Dancing with Rage is designed essentially as a showcase for Walsh’s go-to characters with a half-assed story tying them loosely and improbably together with strange interludes where the actress sits down and reads from a children’s book entitled “The Girl Who Lived Next Door to Her Family”. I haven’t the slightest clue why these interludes exist; the story’s not particularly funny or insightful, but at least it’s not actively stupid. I suppose if you are the world’s biggest Mary Walsh fan- who are these people? Do they only get one television channel?- you will likely enjoy Dancing with Rage. Actually, the other group that might enjoy it are snide Americans who really like reducing Canada to a pathetic, outdated joke- it’s as if this whole 90minute shtick were created as the opening act at a Robin Sparkles concert. Even my plus one who was raised on This Hour Has 22 Minutes didn’t feel like she “got” the show. It’s one big crazy Canadian pile of “What The…?”