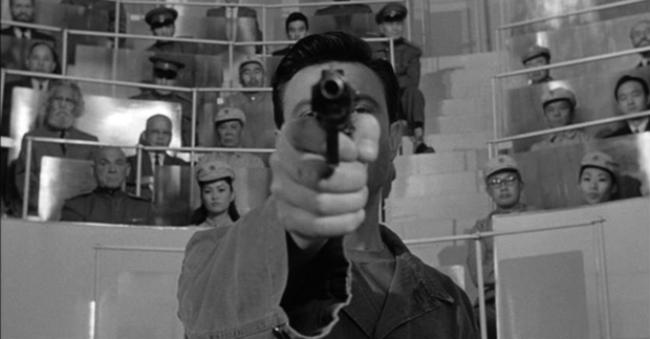 Our Favourites: If I Had to Pick Five…

Nothing says over-reaching pretension quite like a top 5 list of my all-time favorite movies, right? First of all, I’ve likely seen about 2,893 movies in my lifetime, so to attempt to make a list of five out of this grouping is a bit ludicrous. Then, for me to have the vanity to think that anybody gives a rip about my opinion on any of these films is a bit much. Oh well, that’s what the internet is for, and you’re reading this very line so, roll the crap!

5. Once Upon a Time in the West (1968)
I didn’t have a western-watching father or grandfather like all the people in movies and TV seem to have. Well, maybe I did, but they just didn’t watch them around me. My dad watched Fellini and Monty Python while grandpa watched golf. As a result, I came late to spaghetti westerns. I saw this movie for the first time about five years ago. Somehow, it made it all the way up to five on my all-time list. Possibly because it’s the most amazing western movie I’ve ever seen.

The combination of incredible scenery, Henry Fonda’s brilliantly sinister Frank, Jason Robards’ wryly smart Cheyenne, Claudia Cardinale’s smoldering eyes, Charles Bronson’s ceaseless harmonica, and Ennio Morricone’s beautifully scored music; make for amazing sweeping epic cinema. It’s hard for me to take my eyes off this movie as soon as it starts. That’s a 175 minute commitment that I never regret. Also it features Jason Robards delivering one of the strangest compliments to Claudia Cardinale: “…you remind me of my mother. She was the biggest whore in Alemeda and the finest woman that ever lived.” I’m fairly certain that won’t get me much traction at the local watering hole.

4. The Goonies (1985)
To say you love the Goonies isn’t enough anymore. I think it’s more important to say who your favorite goonie is. To me the clear choice is Data, though maybe that’s just because he’s also Short Round from Temple of Doom.  A man with those two screen credits probably doesn’t need anything more. Although remember this movie also gave us Sean Astin, Josh Brolin, and Martha Plimpton. (For the purposes of this article, I refuse to recognize the stardom of Corey Feldman.)

Sure, it’d be easy to say my favorite goonie went with his best friend Frodo Baggins on a magical quest to plunge the one ring into the fiery depths of Mt Doom. I could even say my favorite goonie later found a bunch of money from a botched drug deal and feebly attempted to avoid the wrath of relentless cattle gun-wielding killer Anton Chigurh. None of that would be true. It’s Data. Data gives us ‘pinchers of peril’ and ‘slick shoes.’ End of discussion.

3. The Manchurian Candidate (1962)
I should probably have a Kubrick movie on this list, but instead there’s this. I can’t shake this movie from my head. When I watched it in the mid 90’s I knew Frank Sinatra was a singer that everybody in New York loved, Angela Lansbury was a nibby-nosed TV detective that everybody over age 70 loved, and John Frankenheimer had a really cool name that I loved. It seemed like a fairly standard war story until the ‘brainwashing’ sequence. As we watch the captured US soldiers sit, bored beyond bored as they listen to a meeting of a lady’s floral club. Soon, through a twist of the camera the room spins and we see various enemy officers sitting where we once saw little old ladies, we know this world has been twisted. Things are not as they originally appeared. These elements worked together to create one of the greatest films of political intrigue/espionage ever made.

I remember thinking it’s a sophisticated plot that can easily be translated into the modern era. And then they remade the movie with Denzel Washington and Liev Schreiber. I’ve never seen it. I think the original is so far-forward reaching with its ideas that it doesn’t lend itself to re-creation. Remaking perfection seems a bit unnecessary.

2. Touch of Evil (1958)
I took a film noir class in college because of Touch of Evil. Well, maybe also because of Maltese Falcon, but primarily because of Evil. The model for ‘grotesque corrupted cop’ begins and ends with Orson Welles’ Hank Quinlan. Yes, he plants evidence and yes he strangles a man to death, but toward the end of the movie I’m generally sick of Charlton Heston’s goody-goody Vargas and kind of want Quinlan to get away with it. He can’t be saved though, by the end he’s oozing around screen mumbling and muttering, a mess of a man.

This movie also gets recognition as part one of my three-film love affair with Janet Leigh. I saw Psycho, Touch of Evil, and Manchurian Candidate all around the same time. She’s great in all three, but my favorite scene has to be from this film. She finds herself trapped in a motel with an oddball manager and some reefer smokers who refuse to let her sleep. The scene is a bit silly and over the top, but I love it regardless.

1. Rushmore (1998)
I’ve gone so far as to say that Rushmore restored my faith in movies. I mostly attribute that to Titanic winning Best Picture the year before and a general feeling that movies were going to stink from that point on. I was wrong. Rushmore came along an introduced me to Max Fischer, a nerdy little high-schooler who’s great at putting on plays but a horrible student. Max is a creator. He’s a writer, director, and actor. To say he’s a triple threat is cutting him short. Max is an organizer. He may not get a good grade in his algebra class, but he can bring people together for virtually any project, whether it’s bulldozing part of a baseball field to build an aquarium or creating a Vietnam War stage play in the gymnasium.

Sure, Max speaks to me. He should speak to all of us writer types. We can only wish we had half that kid’s ambition. His top colleges are Yale and the Sorbonne. His safety’s Harvard! Yes, I realize most of what Max says is bullshit, but he’s got a charm to him that makes me root for him anyway. Yeah, Max is a dreamer, and we’ve all seen and read stories about dreamers before. Max is my dreamer, the one that saved me from becoming cynical about modern filmmaking. Max is Rushmore, and Rushmore is my Rushmore. (For definition of a Rushmore, please see the film Rushmore).