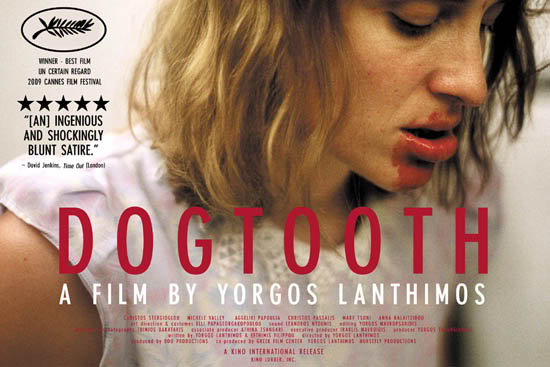 Who knew Greeks can make great cinema? A country famous for its extra virgin olive oil export and hardly any traditions or structure for filmmaking, stunned audiences around the globe with the art-house sensation Dogtooth. Giorgos (Yorgos) Lanthimos’ equally disturbing and comical crafty feature swept the Prix Un Certain Regard award at the Cannes in 2009 and set off for the Oscars in 2010 where it received a Best Foreign Language Film nomination. The film’s success not only earned the relatively unknown filmmaker great recognition in the film industry, but also turned the world’s attention to Greek cinema.

Set in a gated family estate somewhere in Greece, the film unveils the world of an unusual family dedicated to raising their three adult-children in oblivion of the real world existence. In this miniature universe a tall fence and locked gates prevent the children from access to reality, along with a bizarre set of rules, educational methods and re-arranged language. Whether it be out of paranoia, obsession with control, or a simple experiment, the reasons for this “unusual” form of parenthood are unclear and thereafter resolve in developing animalism in the children’s behavior. Yet, this disturbingly-hilarious nonsense, as if evolved out of the Theatre of the Absurd, appears to be quite entertaining, IF you don’t bother to analyze.

Ostracized, adored, or simply misunderstood, Lanthimos’ controversial piece left a huge impact on post-modern cinema. One — for its aesthetics; two — for its craft in storytelling. Unlike most surreal films likely to challenge the audience with their complexity, Dogtooth stands out for its simplicity. Here the fixed camera shots capture whatever comes to frame (whether someone’s ear or a chair’s leg) and great reliance on natural light, provide the picture with more realistic look. On the other hand, the linear structure and slow pace allow the audience to immerse in the surreal world of the story and engage in the absurdity that unfolds in front of their eyes with incredible logic. Evidently, Lanthimos’ simplistic approach here proves that art- cinema can be compelling without being too forceful.

Regardless of its simplicity, however, Dogtooth leaves one challenge: to remain without interpretations. Clueless of the parent’s motives and of the background of the story, along with the open ending, Dogtooth leaves no room for intellectualization of character and story. Ironically, the film is considered to be representing Greek cinema, while in fact the only Greek in it is the language. Besides, the place is so isolated from society that it refers to no cultural or geopolitical issues. In fact, there is hardly any evidence of the time period. What the story leaves us with is plenty of assumptions and not one conclusion. Which is perhaps the film’s hidden agenda: Having the viewer react rather than reflect on what is happening on the screen. Unusual, yet it makes the movie memorable.