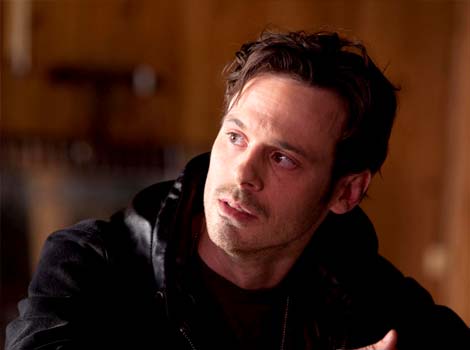 Before we announce the winners of the 2012 Cinema Awards, we’re proud to present our annual Nominee Interview Series.

In honour of the Oscar Argo is about to win, we thought we’d celebrate the night by publishing our Exclusive Interview with one of its most intriguing stars. Scoot McNairy’s beautifully conflicted turn as trapped “houseguest” Joe Stafford in that astoundingly good film is only overshadowed by his even more compelling performance as a skittish hired gun opposite Brad Pitt in the small but startling film Killing Them Softly.

A 2012 Cinema Award nominee as Best Supporting Actor in a Drama for his work in Killing Them Softly, Scoot found a free moment while on the Irish set of his upcoming film to answer a few of our questions about his breakout year.

What was your first major screen role?
Killing Them Softly was for sure the biggest opportunity to join a project with people that I respect and a cast with such high caliber talent. I have been at this for over 12 years so the one role that I feel put me in a position to work with other film makers that I admire and respect would be the role of Frankie in Killing Them Softly.

In the past few months you’ve starred in three major releases- Promised Land, Argo and Killing Them Softly. How did it feel to have such major career milestones arrive in theatres so close together?
Well I feel lucky to have them all came out within a 3 month period. I shot them about 6 to 9 months apart, so to have them all come out around the same time felt encouraging. I was just waiting for them to hit the theatres. Argo, with all the awards and noms that it’s getting is really just incredible, but more so being able to work with Ben Affleck and Matt Damon, Gus Van Sant and Andrew Dominik was very fulfilling. I have been watching all their films for years and now after 12 years of hard work, I get to work with them.

For Argo you slipped into the shoes of would-be Iranian hostage Joe Stafford. Did you get a chance to speak with the real Joe at all before or since filming?
Joe was not really involved with anything once the rescue was over.  He and his wife went right back into the foreign service; I feel they just wanted to put the event behind them.

Your character, as the most skeptical of the group, has a huge arc to play in not very many scenes. How did you flesh him out?
I gained a lot of info about him from hearing what others had said about him in the house. Taking what I had learned and the script that Chris Terrio had written, I knew that the hostages needed to create a hurdle for Ben’s character to overcome and so I focused a lot on Joe making it about his wife and wanting to make sure that he gets her out safe. He felt like he put her in this situation and it was his responsibility to get her out safely.

Joe Stafford’s quiet intelligence stands in complete contrast to your daring turn in Killing Them Softly as nervous hired gun Frankie. What’s the secret to being so chameleonic?
I really can’t answer that. I approach every character in a completely different way.  I have to give a lot of the credit to the directors, Ben and Andrew. I bring in the character and his flaws and his wants and needs and his walk and his voice and his insecurities and his secrets.  And when you work with great directors, they really help you to mold all those feelings and ideas. I spend so many days and weeks just thinking about the little things that define the character within the story.  I’m not sure, I guess just spending a lot of time meditating on the material and the character’s thoughts. I never know how the character is going to turn out until right before I start the job.

In a story about cold-hearted killers, Frankie has to carry a lot of the film’s emotional weight but isn’t an easy guy to love. How did you approach reconciling those two realities?
Well, Frankie has never killed anyone in his life. Frankie is the only thing that has a sense of innocence in the story. I didn’t really have to separate the two realities.  He has to make a change in regards to his routine in his life, but he can’t, because he does not know how and he has no sort of figure in his life to learn from. His whole world is surrounded with crooked people in a cutthroat dying environment. The role played by Vincent Curatola “Johnny Amato” is a father figure to Frankie. He is the only one in his life that can help to provide for him.  Russell’s character played by Ben Mendelsohn is his friend, but at the end of the day friends are not always there for you. When Jackie [played by Brad Pitt] comes to Frankie and asks him to rat out the only person in Frankie’s life, it becomes a real struggle: he doesn’t want to die, but it’s a hard decision because, is it even worth living?! … when the only person in your life is dead… and he is dead because of your own wrongdoing.

Killing Them Softly is a very tough, shocking and even disturbing movie. What was it like entering such a dark world to play Frankie?
It was hard and great at the same time. The most beneficial thing I did was moving into a house with Ben Mendelsohn. These two guys had spent 5 years in the county jail together, they had been through a lot together.  So we felt that we should just move in together and let the roles develop organically. We had some hard times in that house together and we had some really great times in there as well. The best part about it all is that we brought it to work everyday and the relationship feels very real to me as well as on the screen.  Ben is non-stop entertainment.

What sort of response have you been getting? Has either of your major 2012 performances- both so different- affected the sort of roles you’re being offered or the trajectory of your career at all?
Well,  I’m not sure, I’m just really trying to not focus on what is already in concrete and focus more on what is in front of me. I just want to keep my head down and keep my mind on the work and not let all the other BS get in the way.  I do feel like I am getting a chance to work on projects that no one would even let me audition for 3 years ago.

What are you working on now?
A movie called Frank. We are shooting in Ireland; Lenny Abrahamson is directing. Michael Fassbender, Domhnall Gleeson and Maggie Gyllenhaal are starring.  After that I’m shooting a film called The Rover directed by David Michod with Guy Pearce and Rob Pattinson.