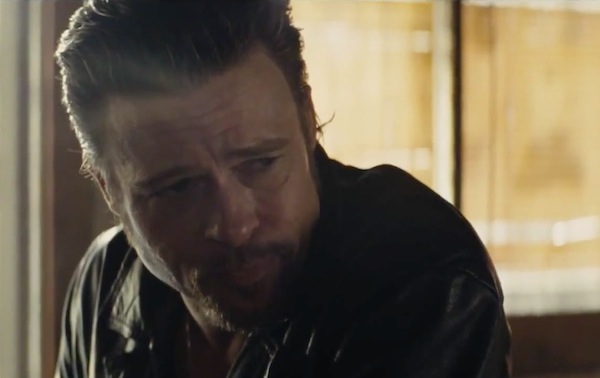 I was torn about this movie. On one hand, some of the performances in it are career-making (in the case of Scoot McNairy) or career defining (when it comes to Brad Pitt, whose career is already made), or at least they should be considered thus. Both actors reach new heights with nuanced character portraits and palpable emotional arcs (or deliberate lack of arc, in Pitt’s case). McNairy plays Frankie, a hired gun in over his head who scurries the spectrum between cocky weasel and sniveling rat then back again with just enough humanizing terror to keep us invested. Pitt, meanwhile, anchors the film as Jackie, the enigmatic power player who’s running the show despite himself being, similarly, a hired gun (though of a different kind). He’s terrifying and terrible but also the only character particularly worth caring about (McNairy’s Frankie flirts with likability but only really gets there by comparison with those even less likable, such as Ben Mendelsohn’s Russell- a criminal version of Droopy Dog, if Droopy Dog were a disgusting Australian heroin addict). My favourite irony of Brad Pitt’s career is that a man known in his youth as a somewhat vacant prettyboy is now not only getting his due as an actor but is shining brightest and earning the most praise for roles that are not only distinctly cerebral but to which he brings even more intelligence than another actor might. Plenty of Hollywood heavyweights could have played Jackie with the intimidating presence he demands, but what makes Pitt’s version perfect is the “softly” in his philosophy on “killing them”. The script says that he doesn’t like the messy emotion of killing, and Pitt delivers that coldness as he kills his prey cleanly, but what stands out are his moments of concern and empathy- gently needling James Gandolfini’s lug of a hitman about his drinking, rubbing McNairy’s neck brother-style as he coerces him into doing as he’s told. They’re mostly fake- if not entirely fake- but the way Pitt plays on the humanity of the other characters is so insightful it’s all the more terrifying. There are plenty of thugs in Killing Them Softly– most of whom are so needlessly brutal and largely motivationless that they take you right out of the movie- but Jackie is not one of them, he’s scarier and smarter than all that.

Directorially and script-wise, on the other hand, the film is a bit of a wank. The sound work seems extraordinary until it gets intrusive and you start to wonder if the engineer was just getting bored and trying fun effects. The whole film is like that, actually, apart from the sublime performances from Pitt and McNairy as well as standout supporting turns from Ray Liotta and, in a fabulously close-but-not-even-close-to-Tony performance, Gandolfini. Director/writer Andrew Dominik seems a little too proud of his oh-so-clever ideas, layering grand and not-so-subtle national themes and recent-history commentary onto his crime story. I appreciate the thought, and I doubly appreciate that Richard Jenkins offers a little self awareness when he calls out Jackie on his (and thereby the film’s) cynicism, but it all gets a little preachy-tiresome. Stylistically, the film flirts with gritty realism and hyper stylization until it’s far away from both. You can mimic Scorsese, or you can mimic Tarantino, but best not attempt to do both at the same time. Or, better idea- don’t mimic at all and just do something new, or not new, just do something honest and/or interesting. There’s a lot of speechifying  by characters otherwise lacking in verbosity and a lot of drawn-out “effect” scenes that set the feeling of the film over and over again just in case we didn’t get how grimy this world is the first 3 times. Dominik seems so desperate to be memorable and important that he eclipses the performances that actually stand a chance at making the film memorable and important.