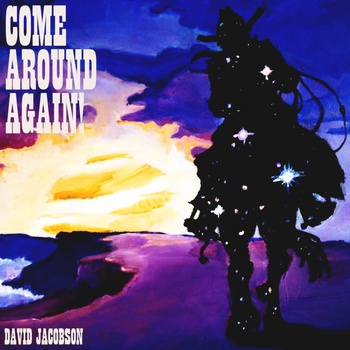 David Jacobson plays simple acoustic guitar lines like a man capable of more than a little Frivolous Complexity, who has nevertheless learned the value of restraint.  ‘Please Tell Me’, the opening track of his scintillating debut Come Around Again, lilts into being with a simple strum that shimmers with grace-notes and sophisticated ornamentation before resolving into a refreshing backbeat two-step of kick drum and electric bass.  A lesser musician would bring these melodic lines to the fore and build entire songs around them; Jacobson is content to let these elements play about the margins.  Jacobson is no lesser musician.

Come Around Again is urgent, driving, and heartfelt –– it plays across the senses like a waft of mountain air.  Unusually for a singer-songwriter effort, the short record is extremely effect-laden –– in its first few tracks, fiddle and harmonica and soaring vocals mingle in a reverberating nether that speaks of open highways and chasms of the soul.  Jacobson owes a debt to his musical and philosophical forebears; these are songs about longing, going home, finding a place, finding beauty.  So when a chord progression sounds lifted fromAfter the Gold Rush, or when a melody conjures Robert Plant’s torment or a lyric, Jerry Garcia’s natural mysticism, it comes off as a loving homage and not a thoughtless grift.

The true highlight is the final track, ‘Everything is So Beautiful’.  This smouldering gem builds around a disarmingly simple structure and layers harmony upon harmony, carnivalesque drumming upon a feverish lead guitar line that betrays Jacobson’s expert theoretical and technical command of his material.  It washes over like a water-colour (and counterpoints the impressive album art by Andy McGrath).  Like the psych-folk equivalent of LCD Soundsystem’s insanely underrated ‘Great Release’.  In its final moments we are left once again with a lone acoustic guitar ostinato that draws the record to a musing close, like an afterthought, like if he hadn’t needed to push the ‘stop’ button on his laptop Jacobson would still be sitting there, playing those two chords, happy as a clam.

This is a studio record, maybe even a bedroom record.  Jacobson plays every instrument on the EP and it shows –– he is a guitarist, predominantly.  So when the drums rattle away with an abandon they seem to prize over accuracy, it’s endearing and not alienating.  One part bluegrass, one part psychedelia, one part folk and five parts nostalgia, Come Around Again is a gem of a record and its creator ought to be on his way to another release and not troubling himself with silly trivialities elsewhere (sources indicate he recently graduated from law school).

Naturally, the entire outing is available for free download from Jacobson’s bandcamp.  Do yourself a favour.