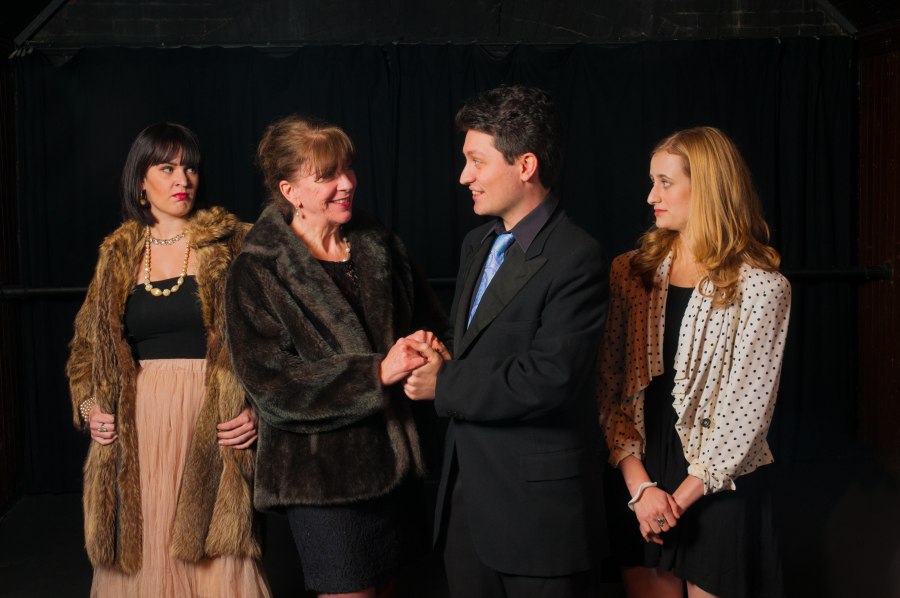 The Sadness of Not Being Earnest

Let’s start with the good news- A Woman of No Importance sports one of the best casts I’ve seen at Alumnae Theatre. They’re not across the board great but there are enough highlights amongst the 13 of them to come out above average. Nicholas Porteous is a charming Gerald and James Graham makes for a mightily amusing cad-prig hybrid as Mr. Kelvil. Gillian English’s Lady Caroline Pontefract is wryly entertaining, if occasionally forced in her determined wry-ness, and Andy Fraser deftly subverts the Alumnae stereotype by outshining her juniors in most of her scenes as an almost Frances de la Tour-esque Lady Hunstanton (and I mean that in the absolute best sense of commanding unfrouffy poise; she also scores the occasional laugh for her out-of-touch comedy, which can be a tough balance). Andrew Batten finds some strong moments as Lord Illingworth (his guard-less delivery of “I want my son” stands out) though his English accent sometimes slips into the unintelligible (few of the accents are perfect, though almost all are thoroughly passable). I also quite liked Mrs. Allonby in the hands of the reliably deft Paula Schultz who plays the character as a sort of Beatrice misplaced as a supporting character and missing her Benedick. Amy Zuch, in a delightful moment of daring uncharacteristic of this type of production, seems to have put some thought into making her simplistic character of Lady Stutfield at least somewhat amusing. Her frothily dim take on the character is grating in larger doses but is a welcome change of pace amidst 2 and a half hours of Grand Speeches by fake Brits.

Inconveniently, my two least favourite performances came from the two most important female figures- Sophia Fabiilli as the puritanical American Miss Hester Worsley and Aine Magennis as Mrs. Arbuthnot, the titular “woman of no importance”. The former I believe to be mostly an issue of thankless character writing- I’m convinced it would take the most charismatic actress on the planet to humanize such a preposterously self-important prude as Miss Worsley. Mrs. Arbuthnot, on the other hand, while not written with a particularly generous hand, could be much better served by a more engaging performance. Magennis approaches the character with the sort of hand-clasped stiffness that a too-young actress often brings to the role of an English mother, delivering most lines as though they are of such great, quotable importance that nothing she says ultimately seems that important.

That last point is a hindrance to the entire production and I hate to say this but I think it must be Oscar Wilde’s fault. I know it’s pointless to criticize the text itself, especially when the playwright is as beloved as Wilde, but I couldn’t help but agree with my date for the evening when she characterized the majority of the lines simply as “bibble babble”. Director Paul Hardy could have helped by taking some of the creative energy he put into theatrical scene transitions and strange meta mime moments and refocusing it on character development and a monicum of societal relevance, but ultimately the failure of A Woman of No Importance lies in- as it often seems to with Alumnae- script selection.

Surely one of the great wit’s other plays could have served the company better. The only one I know particularly well is Earnest but I can tell you that in everything from joke development to character to plot contrivance it’s so vastly superior that it seems to have come from a different playwright entirely. A Woman of No Importance isn’t particularly funny, nor does it have all that much to say beyond its occasional extricable quotes (some of which are actually also in Earnest)and big pronouncements about men, women and English people along the lines of “and that, of course, is The Point” (there are about 6 things that are apparently The Point). There are few people honestly worth liking in the text, and that would be the most frustrating thing were it not for the fact that the majority of characters are just there for scene decoration anyway. In all practicality, everyone save Lord Illingworth, Mrs. Arbuthnot, Gerald and Hester could be cut from the play entirely and the plot would barely be affected. To the detriment of absolutely everything, those four actually relevant characters are also the four least interesting characters of the many not-inherently-interesting characters on stage (and, in this production, the best performances all lie elsewhere). Somehow Oscar Wilde managed to write a play in which anyone worth watching has nothing to do but stand there and make the audience wish for a rewrite.

Hardy’s production isn’t exactly great work, but I don’t imagine “great” was really all that much of a possibility within the mediocrity of what I truly hope is Oscar Wilde’s weakest work.