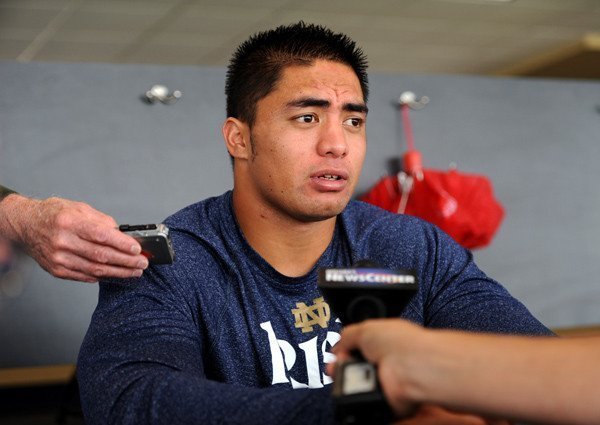 A Guide To Athletes’ Imaginary Friends

Manti Te’o is the latest athlete to be outed as a creative deviant, clutching onto the childhood convention of imaginary friends long past its accepted expiration date, but he is by no means the first to have such a fantastic crutch. It is a long tradition for the most stressed, expended minds to swing towards lunacy, and athletic genius is no different. While Te’o may still be coming to terms with his own dip in the waters of insanity, I salute his struggle and accept his creation for what it is: a dreamed coping mechanism to fuel personal drive. In honor of Te’o and his courage, a lineage of athletes with imaginary friends.

Delonte West
In a post-game interview, Delonte West confessed, “Bugs Bunny is the smoothest dude I ever met.” He went on to describe the joys of a cartoon rabbit’s life, focusing on the merits of high speed, underground travel. From the sincerity of his words, West believes he has met the rabbit and in the best of all worlds, he has. Whether magic is real or not, Bugs helps West express himself, which is about the best thing an invented associate can do.

Pele
Many public figures refer to themselves in the third person, but Pele has raised it to an art. He speaks of “Pele” as a magical gift from above, a flighty spirit that belongs to no one individual, but the world. The man who speaks is only a disembodied consciousness, watching the acrobatic maneuverings of the possessed body below. Pele loved himself so much that he had to have two, becoming his own best friend.

Tim Tebow
A lot of people believe in God, but not everybody assumes they have a direct line with the Big Guy. When Tim Tebow goes long, he sees heavenly wings on the ball, he hears the Almighty’s whisper in the huddle, and he attributes every action, every victory, to divinely determined fate. His streaky career speaks to God’s fickle friendship, sending him through the playoffs one season and benching him the next. Tebow hasn’t lost faith, but it could be that God’s found a new bestie.

Mel Clark
In the 1994 documentary Angels in the Outfield, California Angels pitcher Mel Clark brought his struggling team to its feet with the help of a very real little boy and his possibly hallucinated posse of Heavenly Angels. Through madcap outfield hijinks, spirit boosted swings at the plate, and the hardships of disbelief, the unified Angels arrived at the World Series. While Mel’s trusted allies could not influence the outcome of such an important game, as part of their higher code, he called on his own strength and that of the crowd, triumphing with the support of his imaginary friends, yet through his own independent will. The Angels didn’t simply give him their strength, they revealed the power he held within.

Metta World Peace
There’s no proof he has one, but the assumption is fair.