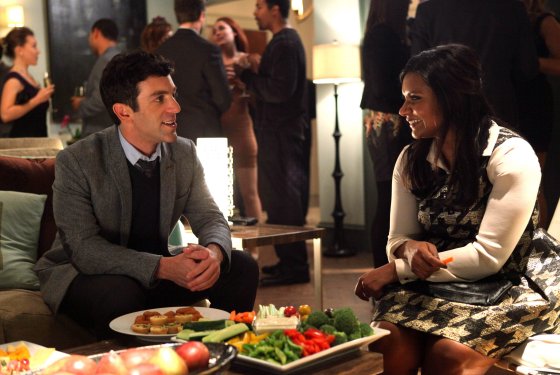 A Week in Standout Sitcoms

The past week or so has had some amazing sitcom moments. As 30 Rock winds down to tonight’s finale, Kenneth was passed the torch as the new President of NBC and Liz & Criss greeted their new 8-year-old twins at the airport, a mini Jenna and Tracy. But the real standout moment for me came in The Office when Jenna Fischer delivered a knockout performance in Pam and Jim’s first really big possibly game-changing fight then the series broke the fourth wall and introduced a member of the mysterious documentary camera crew as a character the characters know. That makes perfect sense, but somehow it had never really occurred to the audience before that these people doing the observing could play a part in what was being observed. Or at least it never occurred to me. It was an incredibly poignant moment when Steve Carrell left the show seeing him taking off his microphone and addressing the camera crew, but there was something shocking and brilliant about the way the concept circled back on Thursday night to somewhat forebodingly comfort Pam when she hung up the phone with Jim. Their fight was a fair and balanced one- throwing neither character under the bus- and therefore was all the more heart-wrenching to watch. And for the camera crew who had been quietly observing this love story for 9 years, it was a fascinating button to see one of them come out of the woodwork and address the relationships it makes sense for them to have formed “offcamera”. (Aside: apparently this was all Mindy Kaling’s idea. Of Course it was!).

But The Office had nothing on the utterly compelling fun happening in the 9-10 slot on FOX Tuesday this week.

New Girl fans have been waiting on the Nick-Jess romantic entanglement for over a year and last night gave us the inevitable giant leap forward. It’s a tricky balance, the will-they-or-won’t-they, and New Girl has so far navigated it brilliantly. The story came up organically because of Jake Johnson and Zooey Deschanel’s surprise fantastic chemistry and the writers introduced the idea of Nick and Jess early enough that it didn’t feel at all like a plotting crutch. They let it slow burn in the background for long enough that such rich material wasn’t rushed away but it never got swept under the rug or derailed past the point of believability. Both characters had heartbreak to recover from and growing up to do and it never felt as though they were just in denial about their chemistry (it’s massively inconvenient chemistry, 99.9% of people on the planet would have also danced around it for at least this long). But it’s not as if Liz Meriwether and crew haven’t been moving the story along. You could see it progressing in the number of Nick/Jess stories that took the scene-stealing away from poor Schmidt, whose magic seems to have run out at the end of season one (Winston is still pretty much nonexistent). The way he fought to keep her heart from breaking in the Halloween episode and went undercover to save her from a “murderer” in last week’s hilarious “Pepperwood”- the writers have been moving Nick towards Jess at a beautifully steady pace. This week they got pushed and he said the wrong thing, they bantered, they smiled out of the corners of their mouths, she told him that he’d be “smoking hot” if he would just take a shower, and the whole thing ended in a fireworks display of awesome that was the slightly clumsy episode-ending grab-and-kiss. It wasn’t the best onscreen kiss in history (It really is an art- all hail Colin Firth and Joseph Fiennes!) but it had massive piles of good writing and chemistry building behind it and ended with a melancholy button that suggests that next week’s episode won’t see the demise of Sam the tall pediatrician boyfriend. I keep rewinding and watching it again- that’s all you need to know. (PS: Cece’s insecure date was amusing and we’ve finally met a decent love interest for Winston! A good episode all around).

Which brings me to The Mindy Project and an episode entitled “Harry & Sally”. Anyone who knows anything about Mindy had to know that with a title like that this episode was going to be a special one. Sure enough, this was the long-awaited BJ Novak episode. For those of you who don’t know, I’m obsessed with Mindy and BJ. They have this weird, intimate, nonchalant, codependent, isolated duo dynamic that I’m completely fascinated by. They’re best friends but have been known to date. Or, not so much date as “be a couple” since neither has the time to date or really spend time with anyone who doesn’t work on their show. But the lines between those two states- friends and couple- have been blurred so much by the inextricable intimacy of their relationship that Mindy’s said before that there have been times when they’ve not even been sure whether they were “together”. It’s a ticking time bomb of a relationship to maintain if either of them ever wants to actually get serious with someone else, but in the meantime it’s enthralling and adorable and very us-against-the-world-y in the best way possible (she poached him from The Office to be a producer on The Mindy Project. She hired his little brother to do the music for crying out loud!), never more so than when they co-write and co-star together on an episode of Mindy’s show. Basically the premise is this: BJ has a “best friend” named Lucy played by Susan Sarandon’s daughter, the awesome one from Saved (aka Eva Amurri). They have no boundaries and therefore Danny, of all people, posits that they are Harry and Sally despite BJ (whose name is, uh, Jaime, but is actually just BJ if he were invented by Mindy)’s claim that they’ve known each other for 15 years and if something was going to happen it would have happened already.

Now, what’s fascinating about this storyline is that it’s based a lot on Mindy and BJ (if they’d never dated), but Lucy is Mindy and Mindy is insert-girl-name-here who’s trying to date BJ. The onscreen fantasticness of Mindy and BJ together and the fact that they wrote the episode suggests that Lucy and Jaime really will just remain friends (and, can I just make a suggestion? Learn Some Boundaries- do not sit on that boy’s lap!) so that Mindy and BJ can be together in their onscreen incarnations (and Mindy and BJ can make a point in their offscreen incarnations that one can have a platonic best friend and not destroy all other romantic possibilities. Though if I were trying to make such a point I would not cast my best friend as my onscreen love interest- this is all just too meta-confusing to wrap my life theories around). However, BJ’s only supposed to be on the show for 2 episodes, so I’m thinking this Lucy thing will take the traditional rom-com turn instead of the “this was written by best friends who should want this the other way around’ turn I want it to take so Mindy the character can be with her cute Latin professor boy (played by real Mindy’s bff- so confusing).

On The Other Hand (there are, like, 6 hands), Mindy the showrunner has really great taste in male casting so she has too many awesome dating options to limit herself to just the complicatedly meta BJ Novak character. Obviously Chris Messina’s Danny is endgame, and I do love him consistently (another hilarious subplot for him this week) and I generally want people to be with the people that the writers set up from the beginning (damn you, Josh Jackson and your irresistible charm, Joey was supposed to be with Dawson!). BUT, I’ve really been enjoying this Mark Duplass arc that’s been going on (though I fear it might be over). Duplass is awesome in that he’s very weird and very specific but he’s also incredibly engrossing as a love interest. He makes smart and strange sexy in a way that’s not just for people who always think smart and strange are sexy. I was really enjoying watching him break down Mindy’s defences and prejudices against his philosophies, it was progressing really interestingly. I also want Seth Meyers back. And Ed Helms. So, basically, what it comes down to is this: “Harry & Sally” was one of The Mindy Project‘s best episodes so far, by a lot, partly because it’s really funny and tonally suggests that the show has finally found where it belongs (in a simultaneous rom-com and subverted rom-com world), but partly because it was really interesting and kind of strangely complicated in a way that a lot of sitcoms aren’t. I can’t decide who I want Mindy to be with. I can’t decide if I want Jaime and Lucy to be Harry and Sally. I can’t even start to try and fold Mindy and BJ into my theories on life and love and friendship because they simply don’t fit in. I love when things are too messy to fit in my theories- it’s just a lot more interesting to watch.