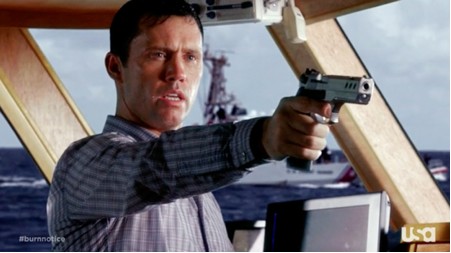 While I am sure there are some fans of Burn Notice who feel the finale was a little rushed, I’m actually happy the entire story was ended without spilling into season seven. Don’t’ get me wrong, I’ve enjoyed watching the whole ‘cat and mouse’ chases between Westin and Reily for the last several episodes but I wanted that story to end, quickly. The two hour final did just than and then some, giving us a small taste of the kind of stuff we’ll be seeing when season seven starts in June.

The action throughout the two hour finale was pretty much top notch. From the gun fights to the motorcycle chase through a hospital all the way to a nice cameo by the coast guard at the end. As usual, Burn Notice had a bit of everything we love to watch and then in the end the show sucker punches us in the gut when Michael breaks Fi’s heart.

I know a few people are confused to what happened in the end, so I’ll go out of my way to try to explain what I think happened. After being locked away and interrogated for weeks, Fiona, Sam, Jesse and Mom Westin came out to what we all thought might be a firing squad, instead they were greeted by a refreshed and suited Michael, who was giving the orders to everyone around them. This is when Michael dropped the bomb: he’s back with the CIA, for good. Not only that, but based on how Michael was ordering people around and the fact that the guard wouldn’t let go of Fi without his approval, it’s clear Michael is more than just a spy with the agency, he’s running the show.

Fi was clearly devastated by this, hoping that she and Michael would walk away from everything and settle down like he had promised earlier in the season. Michael tried to explain that this was the only way he could get them out of jail, but cutting a deal with the agency. Fi didn’t buy it, saying that this is secretly what Michael wanted all along, and it was clearly obvious that things between Weston and Fe were quite through.

Michael made his decision to one up with the agency for many reasons but the fact that he’s no longer burned and his friends and Mom are off the hook for whatever they did this season is just icing on a very huge cake. Michael seems to have taken his mentor’s place in the agency and this could be a shark jumping moment to some or the start of a exciting new chapter in what has to this point been one of the best spy shows ever to hit our televisions.

Burn Notice has already been green lit for season seven and after seeing how season six ended, there are a lot of unanswered questions. Will Jesse work with Michael in the agency? Will Sam retire and go back to his woman and live happily every after. Will Fi ever talk to Michael again after going back to the agency after promising to walk away? How will Michael’s mom feel about him working for the agency again after what happened to Nate?

Hopefully many of these questions will be answered but I walk away from Season Six one happy fan. Season six was more than what I could have hoped for and I just hope the next season can keep up. I’m curious to see how big Michael has become with the agency (I think he took Carter’s job) and what affect that has with his relationship with Fi, Sam and Jesse. We’ll find out this coming June!