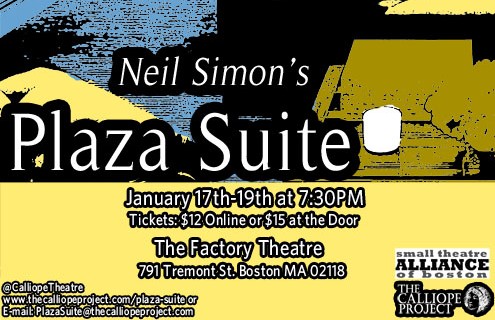 Neil Simon’s Plaza Suite will be The Calliope Project’s premier show as an independent group. The three act comedy mixes dark and light humor to portray three families staying the Plaza Hotel and their trials though an affair, a seduction, and a wedding. Each act is led by a different director to layer different ideals of marriage and relationships.

A company near and dear to My Entertainment World’s heart, Calliope’s previous work as part of Boston University includes The Importance of Being Earnest and Cyrano de Bergerac directed by current Calliope Artistic Director and My Entertainment World staff writer Elizabeth Ramirez. The group is also managed by My Theatre staff writer James Melo as Director, and Financial Director.

Plaza Suite goes up in The Factory Theater at 791 Tremont St. Boston MA at 7:30 pm January 17-19. The show runs approximately two hours and has a ten minute intermission. Tickets are $15 at the door or $12 online and can be purchased at thecalliopeproject.com/plaza-suite.

For more information on The Calliope Project please visit thecalliopeproject.com