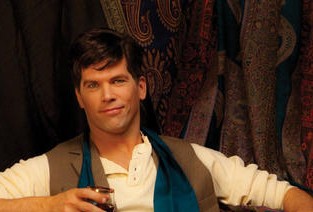 You are almost always sure to expect an enjoyable evening of theatre with the director-designer duo and real life couple of Morris Panych and Ken MacDonald who have been collaborating for decades, as some of the archival production photos lining the lobbies of the Tarragon can attest to.  Now that I have seen several of Panych’s shows in both large auditoriums and mid-sized venues, I have to say that the latter is a real treat: the bridging of sophisticated set and costumes with a relatively intimate ambience are a visual experience next to none.  The current run of The Amarous Adventures of Anatol starring Mike Shara (Anatol) and Robert Persichini (Max) is no exception.

I am immediately impressed by the ceiling high rows upon rows of drawers.  I did not think of counting at the time, but I have since learnt that the upstage wall is comprised of a whole 240 of them, and MacDonald revisited his original design from a Vancouver Playhouse production of Anatol in 2008.  As the play progresses we see the backdrop marvelously transform: from actual drawers where accessories, pictures and knick-knacks are stored; drawer fronts hinged forward to reveal the window displays of a fancy boutique; one such hinge opening to reveal a cubby where cognac and crystal is stored; four (2×2 on ground level) opened ever so slightly and lit from behind as a fireplace; a tall section opening inwards to act as a doorway to Anatol’s bed chamber; and I could go on.  Dividing the stage in half is the elaborate art nouveau entrance.  Aside from new furniture, each scene or “chapter”, as conveniently indicated by a projection onto the backdrop along with the name of the new love interest, indicates the passage of time. In her exploration of period costumes and wigs, costume designer Charlotte Dean gets it absolutely right when creating just the right amount of character touches for each of the seven women, all played equally brilliant, yet uniquely by Nicole Underhay.  Of course, I have my favourites: there is the powerfully hot and snappy (and married) Gabriele, the sassy circus performer (artiste extraordinaire) Bianca, and who can forget the finale of the boisterous head over heels in love (and closest thing to a turn-of-the century hippy) Liona who promises revenge upon Anatol who has slept with her the very morning of his wedding – unknown to her.

When it comes to the feelings this adaptation evokes, I am a little less enthusiastic.  Panych seems to do best when reworking literary texts into an unimaginable feat of music and movement, such as Gogol’s The Overcoat.  The subject matter at hand, here, is treated less topically than it could have been.  In the age that has seen the instantaneity of speed dating give way to the capacity of online dating, there is much that can be said about “characters” like Anatol who roam our enormous modern cities trying to find true love.  So what makes anything Anatol has to say pertinent to me as a theatregoer living in 2013?  The tagline of the show says: “The fact is, the woman you have in your life is never the woman you want.”  But, I believe, that speaks to the promiscuity of the nineteenth century (or any century for that matter) as much as it does to today’s womanizer.  In my opinion, something like, “It’s over for you before it begins,” pronounced by Max (Robert Persichini), speaks not only to fin de siècle European sexuality but of the uncommitted attitude characteristic of many courtships / relationships today.  Panych claims to only contemporize the ideas of a piece in order to maintain the sensibility of the period, but I say that a lot more could have been done to take this play to a truthfully new and meaningful level.  Even its leading star has insisted that Anatol distinguishes himself from the average “player” because as much as a womanizer as he is, he is always confusing his romantic instincts and messing up his chances at love.  I can’t seem to garner any sympathy.  I don’t think that this guy is all that different than guys who embark on a series of relationships that one-by-one fail, avoiding a real reflection on the possible root causes.  In all fairness, the female characters have much more authority than Schnitzler would have written them.  What may have helped me enjoy the language better would have been a quicker rhythm for the greater part of the show.  The dialogue seemed to come short of its dramatic potential despite it meant to be a “fast-paced black comedy.”  The energy behind the Anatol-Max pair seemed to sizzle briefly as the advising friend, Max, became irritated with the vagrant ways of the reckless Anatol, only to come back down again and remain there.  A better build would have, definitely, bumped this show up a few notches for me.  I am left conspiring how spectacular a production this could be with more current cultural references and stronger character dynamic.

The Amorous Adventures of Anatol runs until February 10th at the Tarragon Theatre.