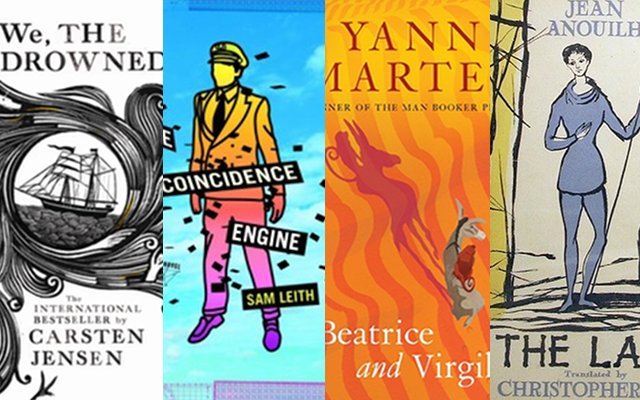 Okay, in the second (third? I guess it depends on how you count) installment of Borah’s Best of 2012, we have two categories.

Think of it as a double feature.

1) Books That Don’t Let Go
This is erroneously named. Only one book really needed to be here. But it did, indeed, need to be here. So, as any good fiction enthusiast would—I made something up.

2) I’m-So-Glad-I-Found-You-Even-If-I-Am-Late
This utterly-made up category is for the books that I discovered in 2012 that—despite their earlier-than-2012 publishing date—really deserved mention.

The Coincidence Engine, by Sam Leith
If you read my original review (or want to read it now) you’ll know that I had some seriously conflicted feelings about The Coincidence Engine. I essentially made this category just for that book. I don’t love the book—I’m not even sure I really like most of the book when I think back on it—but there is one scene that I think about all the time. It’s infected me, sort of (I mean that in a good way). The basics of the scene are these: a brilliant/mad math professor, Banacharski, comforts his mentee, Ilsa (who has trekked all over Europe trying to find him after he mysteriously disappeared), by telling her that no matter what happens, or where they go from here, they will have always overlapped here—Banacharski draws time as a map, and plots out their lives on the map, shading in the place where they share time and space, explaining that time is a thing that can be graphed, and that the time they shared will have always existed in a tangible way, even after they part. Obviously, I’m paraphrasing, and Leith does a much better job (the context helps, too). It’s a gorgeous scene, and a hopeful, infectious notion. And it’s astonishing to me, given how generally unimpressed I remain when I think about the rest of the book. But that itself is a kind of magic. One scene is really, sometimes, all you need.

We, The Drowned, by Carsten Jensen
So, the first English translation of this came out in 2011. Whoops. I was late to the party, but I’m really glad I made it. This book is epic. It’s a fat book—stuffed full of 100 fictional years in the little Danish sailing town of Marstal and the stories of the sailors who lived and left. It is glorious, towering, vast as the sea, and also tiny and personal. And it reads like a new Classic.

I love this book. The writing is stunning, and the adventures multivariate and multitudinous: one involves the survival of a ship’s explosion (all thanks to some sea boots), one involves the hunt for a lost father and the discovery of the shrunken head of James Cook (seriously)—some of the tales are forged by war, some by enterprise, and all by the changing world that only towns and generations can truly bear witness to. Jensen’s epic is, certainly, an epic adventure story, but it’s also funny, witty, and moving. Each chapter in this leviathan is profoundly beautiful, insightful, and populated by complicated characters with their own ideas about how to survive and harness the world.

I laughed. I cried. And I absolutely fell in love with Albert Madsen and Knud Erikson. It’s one of those books that—I’m telling you right now—I have lost any precarious hold of objectivity on. It’s one of those books that I now carry around mentally (embarrassingly—I’m not a me-against-the-world teenager or wanna-be writer/revolutionary) as part manifesto, part armor, and part password. So know that I can’t hold this book at arm’s length. Take comfort in that.

If you like adventure stories, or the sea, or just… good literature, you should read We, The Drowned.

Beatrice and Virgil, by Yann Martel
This came out in 2010. To be fair, this book also belongs in the Books That Don’t Let Go category (hence the double feature). This is the Other book by Yann Martel—writer of Life of Pi. Apparently he has a thing for animal characters/symbolism. Truth time: I have not read Life of Pi yet. I know, I know, it’s like the book every highschooler has read that isn’t The Hunger Games. I know. I’ll get there. Anyway, the point was that I admit that I can’t compare it to his other, more famous book. But from what I’ve heard, this one sounds pretty different (if for no other reason than this one is weirder and less palatable).

Moving right along. Beatrice and Virgil is a story about a writer whose hopes of publishing a fictional flipbook investigation of the Holocaust has been shut down by his publishers as unsellable. The writer toodles around, doing other things until he receives a demand for help in his fanmail. Intrigued, the writer finds that the return address leads him to a musty taxidermy shop—and the lone, prickly taxidermist who wrote the missive. The help he needs is writing help. He’s writing a Waiting For Godot-esque play about two of his taxidermy animals—Beatrice, a donkey, and Virgil, a monkey. The writer helps. They work on this play and work on this play—which gets weirder and weirder (taking place on a country called Striped Shirt and including Games for Gustav—Gustav being both Flaubert’s first name and the name of a dead boy in the play—and generally being a fictional investigation of the Holocaust). When they read the last scene of the play, the writer is horrified and the taxidermist attacks him.

It is about the Holocaust. And it is a weird, short, sometimes beautiful, sometimes uncomfortable brain-melter of a book. After I finished it I think I laid on my bed caught between feelings, just thinking, “what the hell did I just read?” for hours. What is real, what is not, what the Right conclusions to draw from this are… muddy and ambiguous at best. But hell if it won’t make you think. And some passages are gorgeous. But Beatrice and Virgil’s chief value is that it will haunt you for a while and prompt you to reexamine.

The Lark, by Jean Anouilh
This was originally published in 1952. More than half a century ago. I’m late I’m late for a very important date. Dates with Anouilh are important. In case you’re not a massive nerd, Anouilh was a French dramatist fond of adapting classical stories. The most famous of these is his adaptation of Antigone. Which is great (like really truly glorious and transcendent great), but my favorite so far is The Lark—Anouilh’s version of the Joan of Arc story. First of all, the original story is one of my favorites (remember all those times I talk about how much I love little girls who talk to God?), but what makes Anouilh’s adaptation so successful is his knack for giving the stories the potential for another ending. As in his Antigone, there’s a moment in The Lark in which Joan, beaten down and exhausted from all of the politics at Rouen (the site of her trial for witchcraft), relents. She doesn’t hear God speak to her—the clergymen/politicians are all being so kind, offering to give her a nice life if she’ll just sign this confession—just say that she didn’t mean it, that she’d made everything up. It almost ends differently. She almost doesn’t get burned at the stake. She almost does not become a martyr of France. And Anouilh has us for a moment. Joan recants. It is a new story.