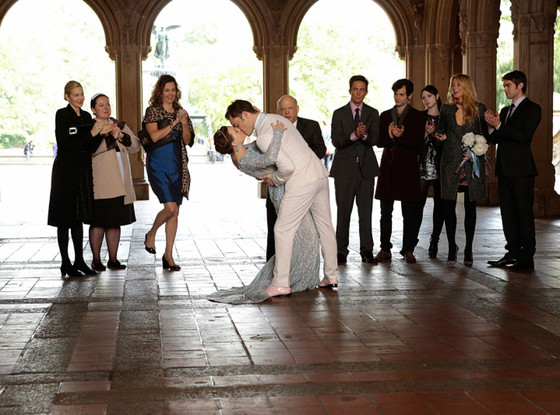 We made it! Those of you still with me on this dramatic, unpredictable, sometimes fun, often difficult, far longer than expected ride- we made it all the way to the end of Gossip Girl. That’s 6 seasons, 121 episodes, approximately 90 straight hours of television (without commercials)- and I watched every single moment. I know there aren’t very many people who did watch every episode of Gossip Girl– some came to the party late (conveniently missing the part where Chuck was a psychopath and only knowing him as a tragic romantic hero), most arrived on time then left early (somewhere around the Hilary Duff threesome, I imagine), plenty dropped out in the middle then returned just in time for the end (and were probably very confused)- but those of you who stuck it out the whole way like I did, do you feel rewarded?

Since the 2007 premiere of Gossip Girl, I’ve approached the series with a “In Josh I Trust” attitude, a trust that co-creator/executive producer Josh Schwartz earned by steering the once problematic OC to a strong season four and intensely satisfying end (also for being a showrunning superstar and general wunderkind).

It started with an absolute bang, then over 6 years Gossip Girl was generally a crazy show full of insane ups and downs that really put that trust to the test. But Schwartz and his partner Stephanie Savage paired the craziness and frequent misfires (Agnes! Vanessa! Racooneyes McGee! Ivy!! the perpetual thorn-in-my-side that was Georgina) with the occasional bit of fun and enough interesting character writing (mostly for Chuck and Blair) to pull the whole series through.

In the end, (Spoilers Ahead) we all knew that Chuck and Blair would deservedly be together (though I could have done without their having a random kid named Henry), that Nate would find a place in the world that was not between a cougar’s legs, and that Serena and Dan would most likely find last-minute dysfunctional happiness designed to bring the story full circle whether it made sense or not. And, of course, all those things came to pass (as well as fashion line success for Blair, and peripheral happiness for everyone else, including Lily remarrying William and Rufus ending up with… Lisa Loeb?!). But when push came to shove, the legacy of Gossip Girl was always going to come down to The Big Reveal and whether or not it accomplished that elusive Sixth Sense trick of at once making perfect sense and coming as a big surprise: Who Is Gossip Girl?

Well, it did make perfect sense. The person Schwartz and Savage chose to have been feeding Kristen Bell her lines all these years was the only person who really made much sense at all, it was even the person who made the most poetic story, and I’m sure that if you watched the whole series from beginning to end in one straight go, all the clues would match up satisfyingly. But it wasn’t who I wanted it to be. I liked the reveal- all the memorable guest stars from years and years back got their moment in the sun (though their shock-and-awe routines were a little suspect) and the tongue-in-cheek Bell and Bilson cameo was irresistibly meta- I just wish there’d been any real shock to it. One of my Facebook friends posted two weeks ago wondering if anyone else watched the show and wanted to know her prediction for who was Gossip Girl. I watched the post out of curiosity- maybe she had a really elegant theory I hadn’t thought of- until someone commented with one simple word: “Dan?”. Everyone thought it was Dan. Of Course it was Dan. The only reason all those people a few seasons back jumped on the idea that it might be Eric or Dorota or even Rufus was because the prospect of it actually being Dan just seemed Too easy, too perfect, too thematically neat to exist in a post-Sixth Sense twist-conscious landscape. I was so sure that the identity of Gossip Girl would be clever and unexpected that literally the only person I had actually ruled out was Dan. (Let me clarify, in case any of you are reading this because you love the sound of my voice and not because you actually watch Gossip Girl– it was Dan).

Now, I don’t want you to get the impression that I’m profoundly disappointed- I would so much rather the writers go for theme than for shock- I’m just a little disappointed that they weren’t ten steps ahead of me. I always want creators to be ten steps ahead of me, it makes watching their work as thrilling as anticipating the end of a spectacular book series or, dumb as this sounds, the unpredictable outcome of a really good reality show (don’t laugh- no one could write a twist as tragically poetic as the moment Colby Donaldson sealed his Survivor fate with the decision to try and beat the best instead of beat the beatable).

It makes all the sense in the world that Dan was Gossip Girl all along (though he did often seem too genuinely busy to be keeping up such shenanigans), but for a show that always prided itself on being shocking, in a finale where the showrunners warned “you don’t want to miss those last ten minutes!”, it just wasn’t all that satisfying.