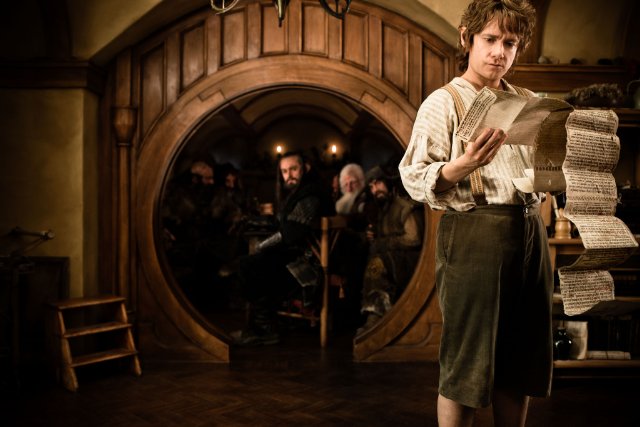 The Hobbit: An Unexpected Journey

Full disclosure:  There is only one Hobbit movie and it was put together by Arthur Rankin and Jules Bass.  That being said, Mr. Jackson has made a valiant attempt.  While Martin Freeman is no Orson Bean, he does a remarkable job being ever so British and disarmingly charming.  In fact, Mr. Freeman may have cranked his Pip-Pip, My-Word quality up to eleven for this movie, a tactic which worked.  And I suppose Howard Shore almost measures up to the warbling musical stylings of Glenn Yarbrough.

In all seriousness, this movie was a delight.  I walked into it, expecting to see a lot more bombast and epic sword fighting and was pleasantly surprised to find that a good deal of whimsy and mirth was kept in.  We were graced with an obligatory expository suppository right from the get-go but it was painless enough and after getting through the BBC version of “Where Do I Know That Guy From?” as each of the dwarves were introduced, the movie really allowed itself to be quirky and fun.

In fact, I’d go so far as to say there were times I felt I was watching a live action Cartoon and I mean that in the best way possible.  From bunny-drawn carriages and dishes being cleaned with amazing precision and acrobatics to a foodie troll and an obese goblin king voiced by Dame Edna, the movie had a lot more Willow and Time Bandits in its make-up than I had dared hope.  There is the odd genetic make-up of dwarves whereby some are beardy, big-nosed, and taken from a book of Brian Froud illustrations and others are…just dudes with axes.  Odd, sometimes jarring, but ultimately forgivable.

There is the issue of Epic-Creep which has been at the heart of much controversy.  The book of the Hobbit is a jolly adventure and not a particularly epic tale of the fate of all the world.  Mr. Jackson definitely plays up and adds in elements to give it that dire sense of foreboding and high stakes and at times the tones can clash as we go from dwarves being silly to dwarves being a tragic race who stare off stoically into the sunset.

However, I feel that I have been inoculated by the bombasity of the last trilogy and so don’t feel too disappointed.  I never thought this was going to be a simple tale told simply.  There’s a Battle of Five Armies at the end of this book.  Do we honestly believe that Mr. Jackson is going to just gloss over it?  Same goes for the tale of the Necromancer.  It’s there, it provides stakes, and it lets us focus on more than a bunch of jerky dwarves jonesing for their treasure.  The addition of the Defiler also feels less shoe-horned in if he’s to represent the orc faction at said battle and cinematically, it makes more sense to introduce him now and give him some emotional weight than just to have a bunch of goblins and orcs show up at the end because why not.  Also, it allows us to have more Benedict Cumberbatch and who’s really going to complain about that?

The movie got right what it needed to get right.  From that moment when Bilbo wakes to an empty house to riddles in the dark, we were treated with those pitch perfect moments that this story affords.  For me specifically, the movie sold itself the moment the dwarves sang.  It takes a lot of mettle to include scenes like that and few would have blamed Mr. Jackson for excising them and yet he didn’t and the movie is stronger because of it.  It reminded us that this isn’t Lord of the Rings.  Yes we are going to see crazy combat scenes with bombastic Howard Shore music, yes there will be long speeches followed by long pauses where everyone stares at each other, and of course there will be flashbacks with people shouting “No!!!”.  Still, this movie did a lot more by allowing itself to share in the rich ridiculousness that makes the book so endearing.

I will definitely be helping myself to a second portion.