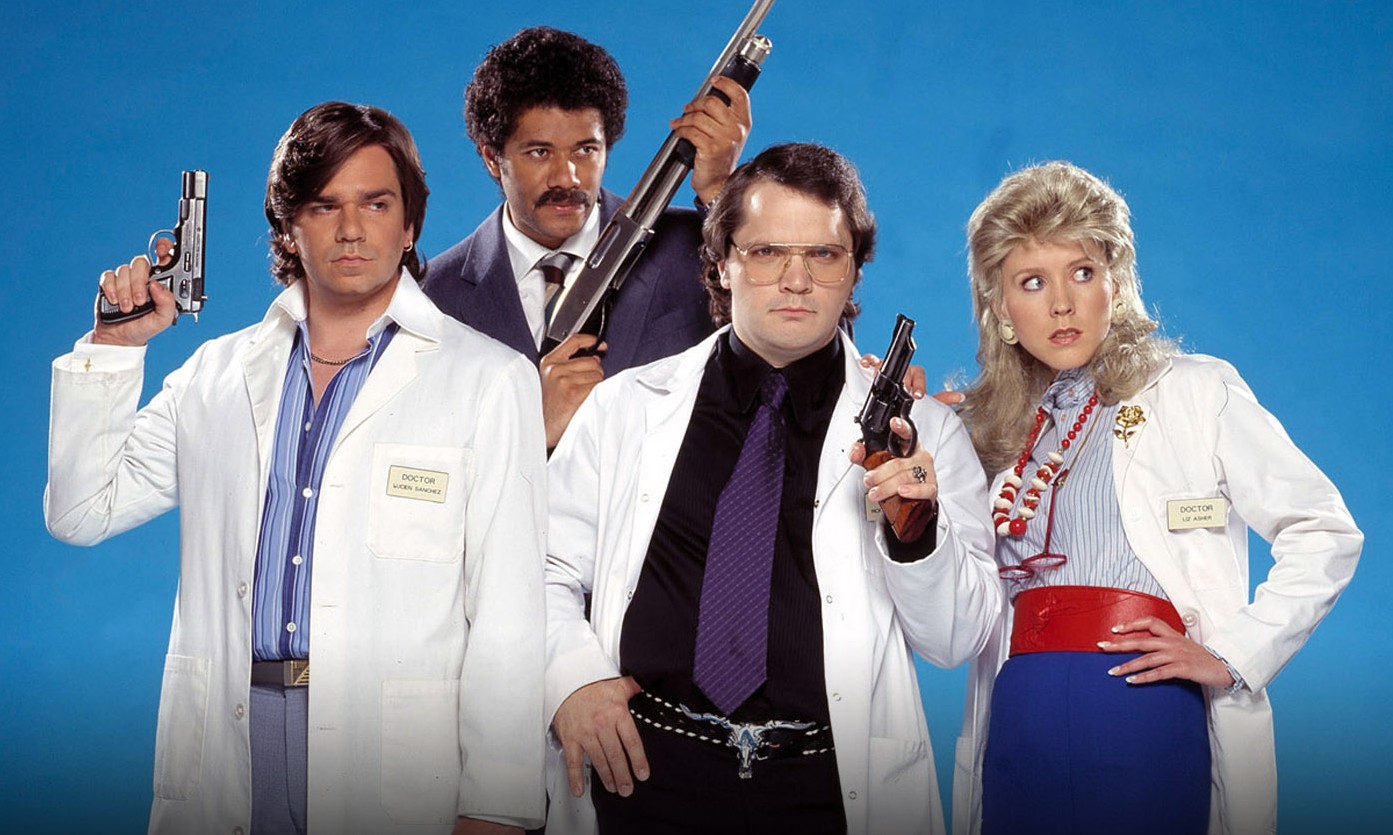 It’s dark, and it’s meta. It presents a show within a show, with real life creators/writers/directors Richard Ayoade and Matthew Holness starring alongside Matt Berry and Alice Lowe all playing actors on the fictional 1980s horror/sci-fi/medical drama, Darkplace. The driving idea behind the larger show is that during an artistic drought, the BBC has asked Merenghi (Holness) to re-air Darkplace, which, according to Merenghi, was scrapped for being too radical. The action of Darkplace is then framed by interviews with Merenghi and his fellow actors. Each episode features a barely explained fantasy or sci-fi phenomenon that undoubtedly allows for Merenghi’s character to save the day.

Many of the names mentioned above may be familiar to fans of British comedy: both Ayoade and Berry starred in the hit show, The IT Crowd, and both appeared in The Mighty Boosh. The three shows overlap considerably, as all but Holness have since appeared on both The IT Crowd and The Mighty Boosh. Those familiar with The Mighty Boosh may be best prepared for the strangeness that is Darkplace (and possibly delighted by the appearances of Boosh creators Noel Fielding and Julian Barratt), as the two shows comedy styles share a similar absurdist DNA.

Much of the show’s humour is derived from that absurdity mixed with faux-campiness: the dubbing frequently goes out of sync, the special effects are as low budget as possible and editing mistakes abound. The protagonist, the eponymous Garth Merenghi, is a pulp horror novelist, and the structure of the show perfectly imitates bad writing, maintained by just enough delightful non-sequiturs to keep it from actually becoming bad writing. Like a badly plotted novel, each episode is essentially an escalating series of events, with logic (let alone continuity between scenes) thrown aside in favour of a deeply melodramatic conclusion and absolutely no resolution whatsoever.

Experimental theatre is actually quite good preparation for Garth Merenghi’s Darkplace as this was the show’s origin at the Edinburgh Fringe Festival, where it won the 2001 Perrier Award. The show is in many ways like a bit of surrealist theatre, almost playing a staring contest with the audience, willing us to blink through ten second long screams or forced treacly moments. If you’re willing to keep with it, the show does also deliver some regular old jokes (“the Lord moves in mysterious ways, sometimes he’ll come in at an angle”) within that high concept/low budget parody framework. It’s worth watching because it’s ridiculousness in its purist form: the show is not attempting any commentary; it does not attempt to rise above and tell us absolutely anything about the modern condition. Instead, it’s content simply being weird.

Simply telling someone that something is weird is no fun – and while the show has basically no plot to spoil, there are only six episodes out there to enjoy, so I will tell you this: one episode is titled “Skipper the Eyechild.” And in the first five minutes Dagless (Merenghi/Holness) adopts a giant eyeball child because he misses his dead half-grasshopper son. And it spirals out from there.

The show is only available on Region 2 DVDs, but every episode is available in its entirety on YouTube.