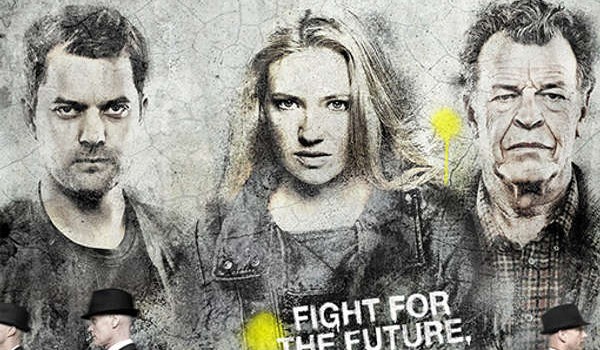 I started catching up with the most recent, and final, season of Fringe with a friend who had never seen the show before. Before watching, I made the naïve mistake of explaining what the show was about. To put it mildly, the final season of Fringe is a slight departure from the show I described; the show it was over four largely excellent seasons. Really, the only things these two shows have in common are the characters. The plot, the structure, the tone, everything about this final season of Fringe is new. And, well, it sucks.

From its first episodes, Fringe drew comparisons to the 90s sci-fi classic, The X-Files. And for good reason: it’s an unlikely male-female work relationship slowly developing into a romantic one against the backdrop of both episodic self-contained sci-fi mysteries and larger, series-long storylines.

The comparison is worthwhile in order to highlight where the two shows are different: as The X-Files universe expanded, it collapsed under the weight of its unresolved mysteries. If you want to experience frustration in its purest form, attempt to map out a straightforward story out of the mess of red herrings and back-story offered up over nine seasons of The X-Files. Fringe, on the other hand, was actually at its best as it expanded and complicated its universe(s).

Perhaps learning directly from The X-Files, Fringe’s various shadow-y antagonist agencies (a science fiction prerequisite) were actually given specific goals and organizing principles. Where the Mulder-Scully relationship slowly became the only vaguely logical thing a dedicated fan could hold to in The X-Files, Fringe managed to maintain interest in two distinct parallel universes. All while indulging in a tried and true television will-they-won’t-they romance, though with decidedly science-fiction-y obstacles (they weren’t on a break: he didn’t realize it was a parallel universe version of his One True Love!). So, where did it all go wrong?

The problems with the current season originate in the preceding season. The writers decided to bring back a previously dispatched villain, make one villain an ally, and re-orient the goals of one of the aforementioned shadow-y antagonist agency. While the season started promisingly enough, with fresh mysteries to be unpacked (and of course brand new romantic obstacles), it suffered from pacing issues – as the writers haphazardly answered the initial questions and unexpectedly introduced new ones, never really satisfyingly answering any.

It’s a structural problem: Fringe fluctuated between self-contained stories – science fiction versions of your standard Law & Order, CSI, crime drama – and big series long mysteries. Where Fringe was successful was when it married these two: tying small stories resolved in an individual episode to the larger arc of the show by dropping in enigmatic elements of a larger, series-long mystery.

By the fourth season, the individual mysteries each explicitly tied into the mythology of the show, and so, rather than slowly fitting together, each episode directly built upon its predecessor. And thus, the pacing issue of the previous season: the show began moving too quickly, never letting the audience adjust to dramatic swings in motivation or direction.

Which leads us to this totally new fifth season. Without warning, for a single episode near the end of the fourth season, the show jumped 24 years in the future. They were theoretically setting up this season, introducing the changes to the universe and new characters. In doing so they completely compromised the rest of the fourth season: they fully revealed the long-term fate of the central characters (along with several major life changes) and so destroyed the dramatic stakes the entire fourth season had been building.

By the time Fringe was renewed, the producers were aware that the only people really watching by this point were die-hard fans. So, it appears they asked themselves: why try to appeal to someone who isn’t going to be a weekly viewer? And they haven’t. Fringe took a wild left turn away from the mostly straightforward sci-fi crime drama it once was, and became a post-apocalyptic drama, with absolutely no individual cases to resolve.

The show ties back to its older self only through the characters, and while they stood tall and likable blundering through emotional obstacles while solving mysteries, they are not really strong enough as the driving force of the show.

One day I will deliver my long-standing sermon on why and how babies ruin TV shows, and Fringe will fit right into this theory. Babies make dramatically uncertain relationships somewhat more stable, as the star-crossed lovers are now permanently linked through the narrative vacuum that is the onscreen development of a child.

In Fringe’s case, this child is at the very least an adult (science fiction time travel is helpful in so many ways), but it is an adult onto which the writers are pouring all of the worst of Fringe. This adult child is the focus of heaps of treacly dialogue, and even a cliché innocent child montage the show painfully reuses far too often.

Where Fringe once took its time, the current season is rushed – melodramatic emotional arcs take place over two episodes; characters are chaotically introduced and killed off before the audience cares, and worst of all, the basic plot of the season seems forced. At the speed the show is going, they are repeatedly just informing us that we’re meant to care about some plot point or character, rather than actually taking the time to develop that investment.

All this negativity aside: am I going to keep watching Fringe? Absolutely. What makes this season such a travesty is that it mars an otherwise easily recommendable show. The early seasons of Fringe are the best of easily digestible science fiction; compelling stories, likable characters, decent mysteries. No fuss, no muss. There are only four episodes left to air, and it is really only the devoted who are willing to wade through the remaining mess.