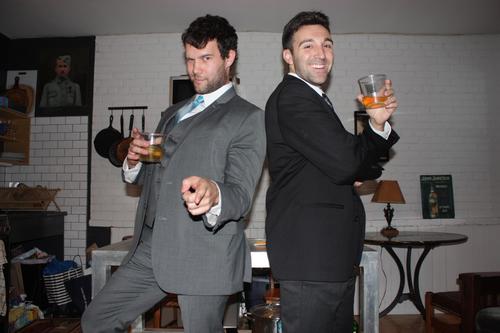 Here’s a thing we think should be a bigger thing, so we’re telling you about it.

BroCast News is essentially two young guys in suits sitting in a New York apartment with scotch and a video camera, recording their attempt at becoming a new pair of slightly sketchy Jon Stewarts for the ADD YouTube generation. As far as yet-to-catch-on YouTube enterprises go, this is a kind of great one. Seven episodes in, the series isn’t quite on its feet yet- some of the jokes are a little shaky, the setup needs a few adjustments- but it’s a solid concept and getting steadily better each week (Episode 7 was my favourite so far).

The “Bros”- Paul Mooney and Eric Russoniello- are engaging hosts with just the right balance of informed-meets-disaffected-and-snarky to pull off their pun-y concept. They contrast each other well in tone but ultimately land on similar perspectives as they go through the issues of the day and add whatever thoughts they have to the plethora of heads already talking. So far I think they’ve been holding back a bit- mostly condemning the easily condemnable and lamenting the easily lamentable- and as the show goes on they’ll, hopefully, open each issue up to a bit more discussion and maybe a controversial opinion or two (incidentally, the somewhat bizarre Episode 6 guest-starring Mooney’s dad was the first to really start some debate; mostly because I think he took Russoniello somewhat by surprise with his intensity). They’ve described themselves on-air as “rich white kids” and both got their university degrees in the oh-so academic field of Film & Television, so when they occasionally trivialize their own points of view it’s funny at first. But then Mooney casually drops in a “when I was in Afghanistan…” and there’s the “oh shit” moment where you realize that these bros aren’t just, well, bros. Both are informed well above average for their demographic and it’s obvious that they put a fair amount of research into the show (they also throw out smart-kid references just as often as douche-bag ones, if not more). Add to that Mooney’s Marine Officer cred and, funny as it occasionally may be, there’s no reason for these two to trivialize or soft peddle anything they’ve got to say. They need to tighten their jokes a bit- maybe consider scripting a few ahead of time- but when it comes to the actual News in BroCast News, or rather the commentary on said news, all they need to do is trust that what they have to say is worth hearing, because it is.

Good friends since college, Mooney and Russoniello have an easy rapport and amusing shorthand, sometimes resulting in a meandering in-joke tangent but mostly just highlighting their off-camera dynamic as on-camera persona. They’re funny guys, and they’re funny together, especially when they embrace their perceived characters (something that should get more defined as their audience grows beyond people who actually know them). Mooney’s the big-hearted alpha male who doesn’t want you to know about that compound adjective; Russoniello’s a little goofier, less prone to big “I just don’t give a shit” statements but more prone to weird analogies you didn’t see coming and ugly ties that inspire Mooney’s mockery. They’re at their funniest when playing off that big-brother/little-brother power dynamic they might not realize they have, or when Mooney deadpans sarcasm at an issue he’s just exhausted of hearing about. In general, they’re at their best when they’re not worrying about being funny, or smart, or self deprecatingly niche (if bros can be considered a niche market) because trying too hard makes them less successful  at all three of those things when they were funny and smart to begin with. They also need to ditch Camera 2, get a little more high tech with the otherwise thoroughly great visual aids (either insert them in post or at least go back to printing them out), and maybe learn to drink their scotch neat so it looks less like ginger ale on camera. But for 7 episodes in, BroCast News is starting strong.

Click Here to check out Episode One on YouTube or click on the video below to watch this week’s episode. The latter only has a couple dozen views so we’re letting you in on the ground floor here people. Go, spread the word of the bros who know about stuff.