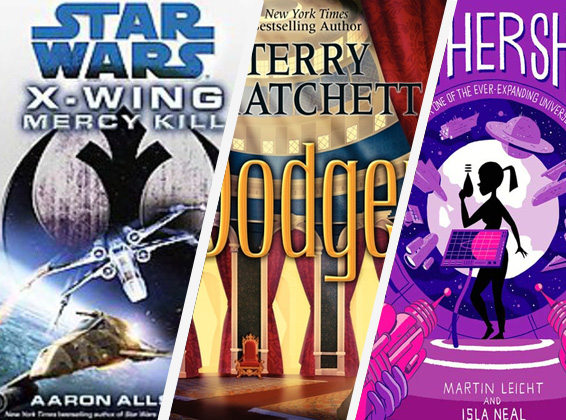 Comic Con isn’t just about comics anymore. This year at NYCC I had quite a bit of bookish fun.

First things first: I got to see Sir Terry Pratchett talk about his latest novel, Dodger. This was both awesome and rather heartbreaking all at once. I’ve said it before and I’ll say it again—I love Sir Terry’s books, and by all accounts he seems like the coolest cat around. Dodger itself sounds cool—it’s a novel about the fictional young man who could have inspired Dickens’s Artful Dodger in Oliver Twist. But Sir Terry is definitely aging (his early onset Alzheimers isn’t exactly helpful either), and throughout the panel, it was clear that he was struggling. The Con was loud and it was hard to hear, but Sir Terry also had trouble speaking into the mic and keeping it near him. It was kind of sad to watch, but at the same time, for a man with early onset Alzheimers, he’s still writing, promoting his book, and talking positively about future projects. He also managed to squeeze in such gold as, “I knew I had to get Dodger into the Chief of Police’s pants. …But always only in the best possible taste.” Sir Terry also revealed that Sam Vimes is his favorite Discworld character. He’s my hero.

In lighter news, another fun book I learned about is Mothership, by Martin Leicht and Isla Neal. It’s about pregnant teenagers in space who get attacked by aliens and has a lot of homages to 80’s high school movies. The authors described it as Juno meets Aliens. For example, the main character’s best friend is named Ducky. Yeah, like from Pretty in Pink. Apparently they went into Draft One calling him Ducky just as a placeholder, but couldn’t think of a more appropriate name later. It sounds like a lot of fun, and the authors were cool. And Leicht was Buffy-obsessed, so bonus points, obviously.

There were also some news announcements about new Star Wars books. Yeah, I’m excited about Star Wars books. Some of them sound truly awesome. For example, James SA Corey, the author of books like Leviathan Wakes and Caliban’s War is going to be writing a Han Solo novel. A new series, called Rebels, was also announced—the series is going to be a set of stand-alone novels from the points of view of different characters. Lucasfilms also announced an Obi-Wan Kenobi novel in the works. The novel will cover Kenobi’s journey from Jedi knight to Old Ben Kenobi in the time between Episode III and Episode IV. …I may have to read it.

Being me, I also picked up some new graphic novels while I was at the Con (I can’t help myself. It’s like a disease). So expect reviews of those in the near future. As well as Dodger and Mothership, probably.