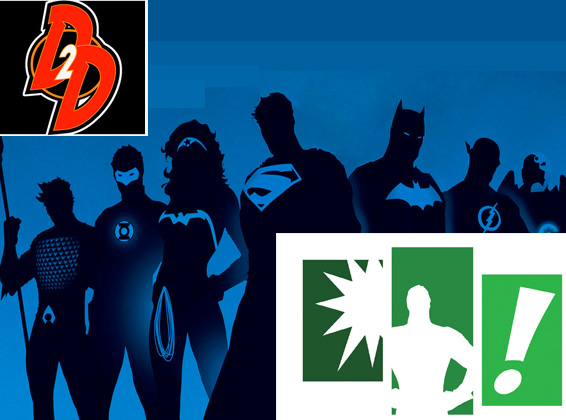 New York Comic Con can feel like something of a circus. It’s loud and crowded with a whole lot of visual stimulus. So in the midst of the spectacular promotional efforts on the show floor (there were cars, and arcades, basically), it’s nice to remember the little quiet booths where people promoted real-life heroics.

Dare2Draw:
Dare2Draw is a non-profit organization that promotes networking and mentorship in NYC’s cartooning community, while also raising money for artists in need. It’s pretty awesome. They also hold regular events like Life Drawing sessions, drawing contests, and giveaways. At NYCC, I attended the Dare2Draw Quick Sketch contest and had a blast, just sitting there sketching (and getting free tee shirts and a really nice pen). So if you’re in NYC and interested in getting involved—either as a pro, a new kid in need of mentorship, or a volunteer—check out Dare2Draw.

We Can Be Heroes:
DC and Time Warner have committed to raising awareness and money to combat the hunger crisis in the Horn of Africa through a campaign called We Can Be Heroes. The We Can Be Heroes campaign uses the most famous of the Justice League characters (Superman, Wonder Woman, Batman, Green Lantern, The Flash, Aquaman, and Cyborg) to support three pre-existing charities—Save the Children, International Rescue Committee, and Mercy Corp—by matching all donations. You can learn more at their site  or at www.wecanbeheroes.org

NYCC Charity Auction:
On Saturday, October 13—the biggest day of the Con by far—NYCC hosted its second annual charity auction. The auction featured original art contributed by more than 70 creators, all being auctioned to support St. Jude Children’s Research Hospital, and was hosted by Steve Borock of Heritage Auctions. That’s pretty freaking cool.

Next time you’re at a Con, keep your eyes peeled for do-gooder opportunities. You may have to walk around the cars to see them, but they’re there. The Con is a multi-faceted beast. And if you plan on going to NYCC next year, check out the Charity Auction. Consider getting some awesome art and helping a good cause all at the same time.