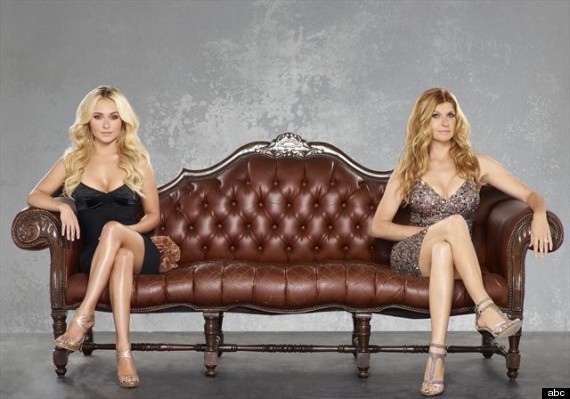 Catching Up To Nashville

ABC’s Nashville purports to be about an aging classic country star unhappily joining forces with a rising pop-country star. I put off watching the first episode because I kind of hate watching pilots whose only function is to set up whatever wacky situation on which the show rests. Luckily, I underestimated Nashville: four episodes in, and that wacky situation is becoming increasingly unlikely. Instead, the show’s scope seems to be much broader, and deeper.

The end of the first episode had thrown that basic plot line – a thrilling and unique clash of new vs old styles – out the window. While they may get there in the end, the show is certainly taking its time. Instead of simply the fraught meeting of two different worlds, the show is about what it means to be in those two opposing phases, without having to bash the viewer over the head with the differences between them.

The young mega-star, Juliette Barnes (played by Hayden Panettiere), along with the three other younger cast members (all aspiring musicians), are all in the process of becoming themselves, and their half of the show is about them making the decisions that will come to define them. The older cast, headed by Connie Britton as the established country singer, with her family and ex-lover/current band mate in tow, are on other end of that spectrum. That half of the show is about dealing with all of those decisions and in some way, reconciling themselves with the people they have become.

A key factor in the show’s success is Connie Britton, who plays the aforementioned classic country singer, Rayna James. Britton’s excellence will not come as a surprise to anyone who has watched Friday Night Lights, where she starred for five seasons as the unstoppably fantastic Tami Taylor [Editor’s Note: or if you watched Spin City, where she starred for four seasons as the hilariously lovelorn Nikki Faber back in the 90s]. Britton pulls off country royalty for the same reasons she was so great as Mrs Coach: she’s deeply charming, likable and her hair is always perfect. She easily outshines Hayden Panettiere, who plays the perfectly acceptable pop foil, Juliette Barnes. A central conceit of the show is that while Juliette sings the superficial pop to Rayna’s soulful country, it is Rayna who comes from money, power and privilege. This backstory is developed over the first few episodes, and gives Panettiere something to work with, as otherwise her role is mostly sexy/ambitious strutting around and telling people “I’m more than meets the eye” without really delivering on that promise through her acting.

Nashville is really an ensemble; while the advertising may seem otherwise, the Rayna/Juliette rivalry is only one element of the overall story. The show has nine main characters, and while they relate to one another in various ways, the show is almost driven by love triangles.

In four episodes, the show has so far mentioned, if not featured, five different love triangles. One of my least favourite TV tropes is when love triangles are stratified with two perfectly nice people who are not together because of some jerk one of them happens to be dating. It’s boring and it means that an actor is basically being paid to play the role of Evil Romantic Obstacle. So far, Nashville, despite all of its love triangles, has mostly avoided this trope. The three aspiring musicians that round out the younger cast are the only ones who tread dangerously close to this territory, which is unfortunate, as they are some of the show’s most compelling characters – and they sing one of the best songs.

To talk about Nashville, you have to talk about the music. It is yet another example of the post-Glee realization that musicals make good TV, not only because afterwards you can sell a CD and DVD, but because it allows for characters to reveal themselves in ways that would be cringe-worthy in any other format. In one scene, ex-lovers stare intensely at one another while singing (quite beautifully) “no one will ever love you like I do.”

The current TV musical format is the kind wherein the characters are themselves hearing and reacting to the songs being sung – and problems may arise when the onscreen reaction is not the same as the reaction in your living room. I had to stop watching Smash for this reason: you cannot force someone to be a compelling singer or character through sheer force of will and repetition. Luckily, the original songs on Nashville, are, well, good. Personally, I’m a sucker for a good duet, and the closing song of the first episode, sung by the two increasingly star-crossed young people mentioned above, is a beautifully regretful song.

The show is not without its faults, of course. There’s a questionable political side plot, with Rayna’s husband deciding to run for mayor under the wing of Rayna’s father. The latter is one of the show’s shallower characters; her father is a cartoonishly Southern tycoon Big Daddy character. The title of the show indicates that it may have the lofty ambition to portray more of Nashville itself, and thus the political plot is there to expand the world of the show beyond simply the trials of the music industry. To that end, the show has smartly cast Robert Wisdom as Rayna’s husband’s political rival. Robert Wisdom was excellent and understated as Bunny Colvin on The Wire, the definitive rich TV show universe that explored Baltimore, rather than Nashville. This part of Nashville is the least developed as the setting up of various plots in the rest of the show are rewarded with musical numbers, this does not translate to the political scheming, and thus it often seems the most tacked on.

So far, it looks like Nashville is revving up to be an incredibly enjoyable show, with lots of strong female leads with artfully curled hair. Its main strength is that it has not yet strayed down any overly predictable paths; the central rivalry is believable and about more than just a clash of styles, the love stories have realistic motivations and, importantly, the music is actually memorable.