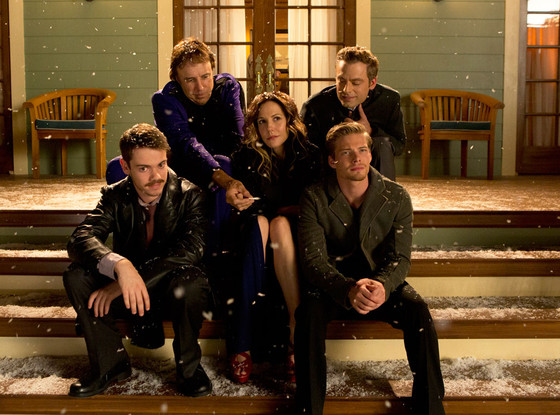 In its final season, Weeds got back to basics in a lot of ways. It’s been 8 very long years with the Botwins but ultimately it’s been 8 pretty good ones. At the end of season three, when Agrestic burned to the ground, the series lost its satirical core (and many of its most engaging characters- Conrad, Heylia, and, later, Celia). The Mexico years were pretty rough but Weeds hit its rhythm again the moment Shane picked up that croquet mallet. The show started with a decently relatable Nancy just trying to hold on after the loss of her husband. As the years progressed she got wilder and crazier and less and less relatable, and at first that was incredibly alienating, with almost all of the show’s emotional heft falling onto the capable but overloaded shoulders of Andy and Silas (Aside: Can we talk about Hunter Parrish for a second? Silas was designed to be the eye candy but Parrish turned into an incredibly strong actors over his years on the show. Kid should be a proper movie star, it’s bizarre that he’s not by now. End of Aside).

With Shane as a comic sidekick in the show about a sketchy heroine and the men who prop her up, I thought the massive shift in Shane was a weird one, maybe a little extreme considering he started the show as a 10 year old. But, looking back there are enough moments that can be taken as clues (some of anti-social behaviour, the incident with the mountain lion, the trauma of watching his dad die) that it actually brought together the character of Shane and made him at once clearer and more interesting. But, more importantly, it gave Nancy consequences and linked them together as somewhat like-minded troubled characters (whereas Silas and Andy, though burdened, were strong and good even when weak and shifty). All of a sudden, Weeds had an almost Dexter-like edge as Nancy worried about how her son turned out and why he did, while also trying to stay as straight as she could herself.

This last season was a pretty good. I liked the inherent danger of Shane joining the police academy, though the focus on his corrupt mentor grew quickly tiresome (and his oldschool alcoholic bit was a lowpoint story-wise in the finale). Silas’ search for somewhere he can be at peace and grow his plants was endearing and the perfect closing arc for the only character who actually grew, benefited and found his purpose because of the series-starting misguided business venture. The return to “Regrestic” in the 100th episode yielded a lot of full-circle greatness (including the much-overdue return of Conrad) but one of the highlights was Silas’ reconnection with his season one soulmate Megan. She was the only woman in his 8 seasons of girlfriends who really made sense with and of Silas and her resentment of Nancy was both funny and appropriate while also making the audience a little defensive of Nancy, a surprising reaction that was incredibly helpful after years of hating on her.

As for Nancy herself, the final season wasn’t actually all about her. There was a lot of Andy searching for love (first with the even more annoying Botwin sister Jill, then with a dumb waitress he spontaneously married, then anywhere but near Nancy) and her sons trying to figure out their lives, but Nancy was doing a lot of stuff like getting Stevie enrolled in soccer and interfering with Silas’s business ventures. Ultimately, she set the family up with a soon-to-be-legal weed cafe business which she sold in the finale. The most interesting thing for her was her own journey towards love- finding it, accepting it, and ultimately living without it. She found and married a wonderful and way-too-nice-for-her rabbi who served as Stevie’s surrogate father offscreen between the 100th episode and the flashfoward finale before he died suddenly (because that happens to men Nancy marries, remember? All of them). We are to understand that she didn’t sabotage it somehow and that she, him and Stevie lived a pretty great life up until his death and Stevie’s bar mitzvah during the finale (where he begs her to let him go to boarding school, leaving her completely alone).

The last we saw of Andy before his anticipated finale return (as, finally, a happy man) is a decidedly unromantic tryst between him and Nancy in the 100th episode that is heartbreaking and angering and horrifying all at the same time. It’s not a tryst really, that doesn’t capture it; it was quite simply a fuck- nothing more, nothing less. After years of pining and masochistic devotion, Andy finally gets to have sex with Nancy but it’s full of desperation and resentment and palpable self loathing as he hastily takes her on the front lawn near where Judah died. It’s over in seconds and Andy pulls himself together and takes off down the street as fast as he can, Nancy grasping and begging him to come back. It was an incredible scene that concluded their more-than-complicated relationship so perfectly that I started to wonder if Weeds was a far more brilliant show all along than I’d given it credit for. In the finale, when Andy finally shows up to the bar mitzvah, Nancy proposes him moving back and he, for only the second time in series history (the first time being the previous episode when he refused to turn around as she called after him), refuses her. For an arc that played out bizarrely and often got pushed so far to the back of the action that it was as if it wasn’t there, Andy and Nancy’s ending was perfect.

The final piece of the puzzle was Doug, whose post-Agrestic presence on the show was always so weird. In the final season they played with his perma-subplot presence by simply owning it, giving him a speech about being tired of being an afterthought to the Botwin family. While attempting to start a scam through which he could launder money, Doug’s best storyline in years came when he registered to start a homeless shelter. Accidentally forced into actually running a homeless shelter, Doug started to turn into a good person, albeit one who does his good deeds in an amusingly roundabout way. I really liked that story, particularly the angle that had Doug depending on the insights of a man who claimed to be from the future (“you know I’m not really from the future, right? I just have borderline personality disorder”-my favourite line of the final season). The finale took predictable digs at Scientology when Doug returned as The Master of his own religion and tried to win back his long-gone son (Shameless‘s Justin Chatwin reprising his one-episode role from 2005), but the leadup to that easy-laughs, easy-redemption story was actually pretty great.

Though I honestly did enjoy these last few seasons, I almost wish they’d called it quits after season six’s fantastic sacrificial finale that saw Nancy heading where she belongs and her family flying far away. But, ultimately, the Weeds finale was a fine finale. Not a great one, but a really really solid one from a show that was truly all over the place for years. And it came after a pretty solid season, which is the even better news. The final shot of the long-running series was its regulars (Nancy, Andy, Doug, Silas and Shane) sitting on the front steps in the snow, sharing a joint. It was an appropriate shot in some ways (certainly considering the founding premise of the show) and not in other ways (considering that most of the show was actually about how *shocker* crime corrupts). The fact that they all started laughing in the end? Awesome. Because Weeds, no matter what else, was a comedy. In the end it became a comedy about horribleness and craziness and the things we can get away with. It’s all ironically disastrously bizarrely hilarious.