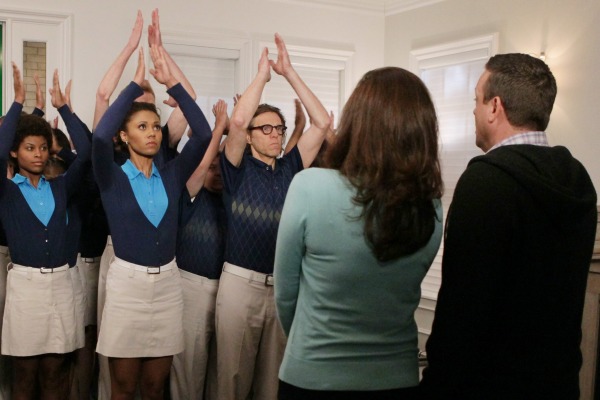 At first glance, ABC’s bizarre new alien sitcom The Neighbors is abismal. So, as I try to do with shows I hate on contact, I gave it an extra week to grow on me. And, for the first time since I implemented that policy, it actually did grow on me. I wouldn’t go all the way to saying I like The Neighbors, but after the second episode I’ve at least started to get it.

Basically, the premise is that a normal New Jersey family (mom, dad, surly teenage daughter, two other bratty kids) move to a pristine suburb and become the first humans on the block since the aliens arrived (to evaluate whether Earth was suitable for long-term habitation) 10 years earlier. The aliens function as an in sync community- they all dress alike, they appear on command- while they await instructions from their home planet (which will never come, since their only communication device is destroyed at the end of the pilot). The aliens have studied, and attempt to replicate, human culture though they’ve never encountered a real human before the Weavers move in and that two-way culture shock is where most of the show’s meat comes from.

I’m sure there are lots of people who will get laughs from “aren’t they weird?!” gags like how the aliens are all named after human athletes (their leader is Larry Bird, his son is Dick Butkus) or that they sleep in “pods” and wash dishes by throwing them out the window. But I got bored of that almost immediately so it took until the second episode for me to find anything worth actually enjoying in The Neighbors. This week’s episode was actually pretty good as Larry and his wife Jackie Joyner-Kersee (played by series MVP Toks Olagundoye with smart offbeat timing) braved a trip to the mall with the Weavers to get their kids- Dick Butkus and Reggie Jackson- new clothes so they don’t “look like nerds” when they start human school (the mall allowed for the human-observation comedy that the show does much better than the alien-observation comedy). With the exception of Olagundoye (who stole the episode with an impressive sequence of spot-on accents she was trying on to “seem more approachable” before going back to British), all the principal adults are remarkably boring, so it was nice to see the kids get something to do. The sweetly stiffled Reggie Jackson (Tim Jo, because alien genetics are above stupid things like race) is in love with Amber Weaver (yet another Mamet daughter stealing TV comedy scenes; this time it’s Clara, who is amusing so far but not nearly as genius as half-sister Zosia) and when asked how pretty she is on a scale of 1 to 10, he says Pi (to which she demands: “so you’re saying I’m a 3?” and he cheesily but cutely replies “No, I’m saying you’re infinite”). Dick Butkus (the likably weird Ian Patrick) had some cute moments but it was weirdly the youngest Weaver kids who had the best story.  The sibling dynamic between Abby and her slightly older brother Max I feel like is dead on, or at least in the ballpark of on (sick on? mortally wounded on?). Max’s mantra of “Stop. Screaming” and Abby’s heartbreak when he refuses to hold her hand (which mom told him to do) made my little sister nostalgia kick in. It all came to a slightly-too-precious but very sweet end when Max realized that she only screams because it’s the only way to get his attention. If you’d asked me last week if there was any chance that all three Weaver kids would be at all interesting, I would have said zero. But I guess since the aliens aren’t as interesting as you’d think, the humans have to step it up.

This brings me to the reason that, even though it’s very weird and not all that likable, I understand why and how The Neighbors made it to the air. It’s a kid’s show. Yes, it’s a societal commentary on how bizarre some of our ingrained customs are and that we don’t really know are neighbors, but it’s mostly just a sitcom that parents can watch with their kids after dinner and before bed. When I was a kid we used to watch Full House, Boy Meets World, Family Matters and the like as a family but, as I’ve gotten older, the number of family-friendly shows on primetime networks has gone way down. With the rise of basic cable (the Disney channel and ABC Family specifically), shows that appeal to a kid’s taste, timing, and lessons-in-need-of-learning have been separated from what the parents watch on the big 4 (with The CW sitting in between as what the kids watch when they’re too old to want to watch TV with their parents anymore and too young to want to watch TV with their parents again). I guess you can watch The Big Bang Theory with your kids, but they won’t really get it/like it the way they might The Neighbors. It’s a kids show at its core, complete with green slime, physical humour, and a great big heart.

The buzz around my demographic has been full of Neighbors hatred for the past couple weeks, but that’s because we’re not who’s supposed to be watching; we’re not supposed to look at Neighbors and criticize it for not being as nuanced as Louie or as sharp as Parks & Rec. The snarky twentysomethings can go watch Community and gripe that the NBC corporate machine is likely going to kill that particular experiment in genre subversion at the end of the season. Meanwhile, those who were teenagers during the 3rd Rock era can curl up on the couch with their 5 year olds and watch them giggle at the funny aliens and their green slime while learning fun lessons about acceptance and holding your little sister’s hand when your mom tells you to.