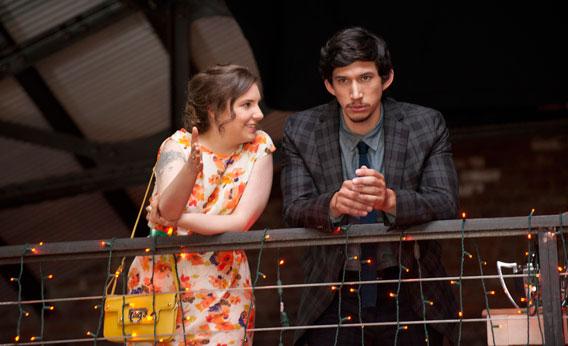 I should probably also admit that as a semi-employed pop culture addict, I am acutely aware of the controversy that has inexplicably surrounded this teeny tiny show. From the sort-of legit (the fact that it represents such a narrow swathe of 20 year olds and the characters are self-obsessed to a fault) to the absolute bullshit (Lena Dunham’s looks, the fact that Dunham comes from wealthy, successful parents), I’ve spent an absurd amount of time reading about all the reasons why people want to dismiss this goofy little tv show about struggling 24 year olds.

I think a lot of that dismissal comes from a fundamental misunderstanding of the premise of Girls. In the previews for the show, aired incessantly on HBO before the program had a chance to speak for itself, they kept showing the same clip of Hannah saying “I really think I may be the voice of my generation.” Now that is obviously an obnoxious statement. Probably THE obnoxious statement. And a show about characters that awful, that celebrates that awfulness as something arty and brilliant? Well that would be an obnoxious show.

Similarly, however, a show that was just a takedown of the worst stereotypes of Millenials would be a pretty awful show. Girls isn’t that either, though. It’s a show with flawed, self-obsessed young women at various degrees of success.

Nothing better elucidates the character of Hannah (and Dunham’s perspective on her) than this line, said by Hannah to Adam after she’s acted like a huge jerk to him: “No, because I am more scared than most people are when they say that they’re scared.” Hannah is so self-obsessed and self-critical that she thinks her bad qualities are worse than all other people’s bad qualities.  So she sabotages herself again and again. But she’s also kind of adorable, and there is truth behind this statement.

I loved watching Dunham’s characters come into the light slowly throughout the season. I am crazy in love with Zosia Mammet’s Shoshanna (and loved her losing her virginity to Ray in the season finale). I like the way that Jessa (Jemima Kirk’s) layers of practiced cool mask a terrified little girl, constantly making trouble for everyone around her. I even like Marnie (Alison Williams) in all her worst-person-in-the-world, young woman fear of being normal and desire to be adored. These women do not, under any circumstances, represent all women. Not everyone is a Carrie, a Miranda, a Charlotte or a Samantha, and our desire to make four characters speak for all women is absurd. Instead, Marnie, Shoshanna, Jessa, and Hannah are four brilliant, multi-faceted, often awful women who I am really excited to keep spending time with. Their experiences often mimic mine, because I am lucky enough to be young, middle class, and a complete idiot, but they are telling their own stories.

That’s to say nothing of the subtle and brilliant world the show has built up throughout its first season. The season-ending wedding allowed them to bring back a lot of their recurring characters, which really demonstrated just how deep a wheel house they have going. Adam went from being a loathsome oaf to being the surprisingly endearing voice of reason (what?!). Charlie went from ingratiating to heartbreaking. And Ray? Well, he might still be an audience surrogate, which is why he ends the episode with Shoshanna.

There’s a lot more to be said, both by these women and about these women, and I can’t wait for another season to do it.